Please ensure Javascript is enabled for purposes of website accessibility
Log In Help Join The Motley Fool
Free Article Join Over 1 Million Premium Members And Get More In-Depth Stock Guidance and Research
By Rekha Khandelwal – Sep 9, 2021 at 11:21AM

One of the stocks has fallen 69% so far in this year.

The electric vehicle sector is rapidly evolving. At the same time, the players in the segment are facing increasing competition both from newer entrants as well as legacy automakers who are leaving no stone unturned to retain their shares of this growing market. As things stand today, it's a difficult task to predict who will survive in the EV race.

Why are EV stocks down?

EV stocks have seen a lot of investor interest in recent years. The growth of Tesla and its stock largely fueled investors' enthusiasm for EV stocks. President Biden's announcement of an intention to replace federal government's huge vehicle fleet with EVs added to this euphoria.

The narrative has, however, shifted a bit in recent months. The possibility of production delays due to a semiconductor shortage and the spread of the delta variant, concerns relating to overvaluation of EV stocks, and accidents involving self-driving features have resulted in a sell-off in EV stocks. 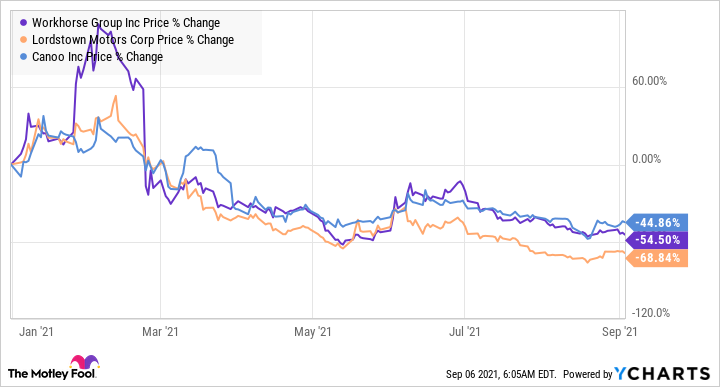 Despite the latest fall, most EV stocks are trading at levels higher than they were trading at months ago. As an example, Workhorse Group stock is down more than 50% since the start of 2021. Moreover, it is 78% off its all-time high level of a little over $41, which the stock reached February. While the current price looks like a bargain opportunity, it doesn't if we go a little bit back in the stock's price history. Even after the recent fall, Workhorse stock is still trading at a price 140% higher than two years ago.

Like other EV names, Workhorse Group's stock rose drastically in the second half of last year up to February this year. The stock's spectacular rise was driven by the company's first deliveries, the possibility of a huge order from the U.S. Postal Service, and overall enthusiasm for EV stocks.

However, Workhorse Group is facing a string of issues, starting with not winning the Postal Service order. Moreover, the company has significantly fallen behind on its production plans. In July 2020, Workhorse delivered only two electric vans. The number of deliveries increased to just 14 in the second quarter this year. The company has consistently failed to deliver based on its guidance. For example, management projected it would produce 300 to 400 vehicles by the end of 2020. It has delivered total 20 vehicles so far in 2021. 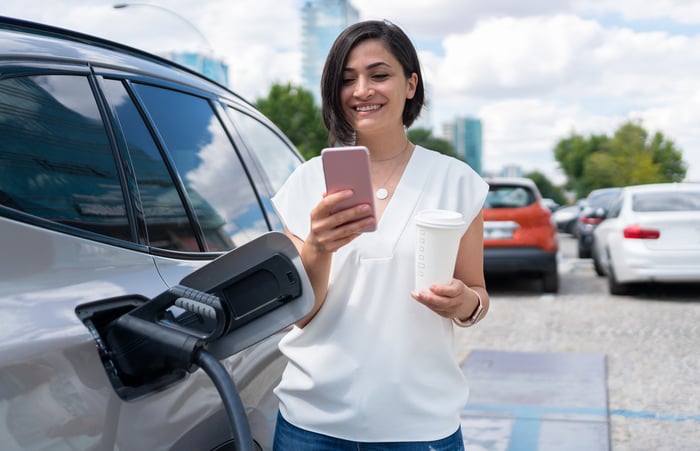 Workhorse has recently replaced its CEO, is revising the design of its very first model, and is reportedly facing an investigation from the Securities and Exchange Commission. Finally, Workhorse is competing in an EV segment that established players already have their sights on.

Like Workhorse, the list of issues facing pre-revenue company Lordstown Motors is long. From being a short-seller's target, to a going concern warning (a going concern is issued when a company has doubts about its ability to continue operating for at least a year), to leadership departure, to fierce competition, Lordstown has had numerous problems to deal with. The company expects to begin deliveries in the second quarter of next year.

Lordstown has appointed Daniel A. Ninivaggi, with extensive experience in auto and transport industries, as its new CEO. However, it might be too early to say if the leadership change can take Lordstown out of its troubles.

Listing in December last year, Canoo is one of the newest EV kids on the block. To bring its products to market quickly, as well as to expand its geographic footprint, Canoo has partnered with VDL Nedcar, a contract vehicle manufacturer in the Netherlands. Canoo expects to deliver between 500 and 1,000 vehicles in 2022 and 15,000 vehicles in 2023 under this agreement. At the same time, the company is manufacturing its own plant in Oklahoma.

Canoo's co-founder and former CEO Ulrich Kranz resigned hastily in April, and its executive chairman Tony Aquila is the company's new CEO. The new leadership has announced certain key changes in the company's growth focus, especially relating to its contract engineering plans and subscription service model. With the first vehicles still several months away, there are significant risks involved here.

There are reasons behind the steep fall

While Lordstown and Canoo are facing challenges even before their first deliveries, Workhorse Group is facing issues with its first models, and is redesigning them. Workhorse is also significantly behind in its production plans.

The EV segment has become increasingly competitive with pure-play EV companies like Tesla as well as legacy automakers launching electric versions of several of their models. The challenges ahead for EV start-ups like Workhorse Group, Lordstown, and Canoo are tall. Additionally, Lordstown and Canoo are right now struggling to start production while Workhorse is finding it difficult to ramp up, even as its first model is seemingly encountering technical difficulties.

All in all, there are reasons why the three stocks are down. The best course is to avoid these stocks and instead go for more credible EV stories.