Shares of electric vehicle start-up Lucid Group (LCID 3.89%) plunged 15.9% in August, according to data provided by S&P Global Market Intelligence. Lucid Group was not alone, though, as several EV stocks saw some correction last month. Nio and Nikola stocks each plunged 12% during the month, while Fisker stock fell roughly 13%.

Most EV stocks have lately seen some correction, attributed to quite a few factors. First, there are concerns relating to a possible delay in the production plans of the EV companies. The concerns, initiated by a global semiconductor shortage, have been aggravated by the spread of the delta variant of COVID-19. Second, a steep rise in EV stock prices last year, as well as in the beginning of this year, has sent their valuations higher. Concerns relating to the high valuations also contributed to the sell-off seen in recent months. 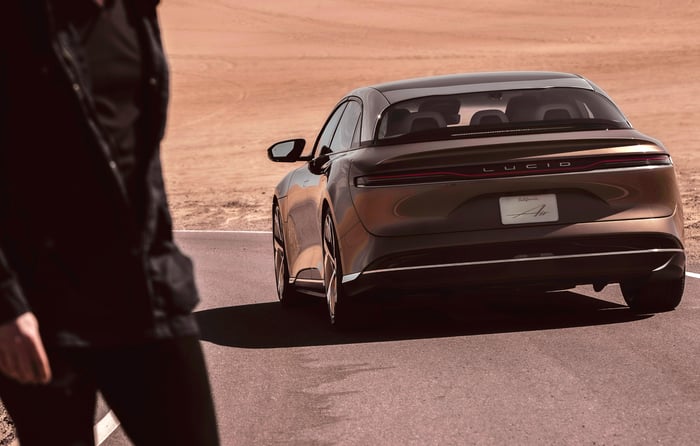 Third, increasing competition in the EV segment has also made investors concerned about the long-term prospects of EV start-ups. Finally, news of accidents involving self-driving features of some EVs have added to investors' long list of worries.

There was no company-specific news from Lucid Group to have caused the fall in the stock in August. However, as the lockup period of certain early investors expired, the stock fell another 10.9% on Sept. 1.

Lucid Group has made some tall promises relating to its upcoming products. The company's cars have shown results in line with its claims in the prototype testing. Lucid has announced that in the week beginning Sept. 27, certain invited guests can see the company's manufacturing process at its Casa Grande, Arizona, plant as well as test drive Lucid Air -- its first car. That does look like a step forward in the company's plans of starting deliveries to customers this year.

Though Lucid Group stock faces several risks, the company seems to be more or less progressing on its planned trajectory so far. The latest dip makes the stock a bit more attractive for investors interested in opening a position.

Why Lucid Shares Are Dropping by Double Digits This Week
349%