A grim announcement from Toyota sent shockwaves through the auto industry.

Shares of several electric-vehicle companies closed lower on Thursday, after global auto giant Toyota (TM 1.57%) said that it will cut its September production by 40% due to parts shortages.

Here's how these companies fared on Thursday, relative to their closing prices on Wednesday.

Toyota said on Thursday morning that it will cut production at 14 of its factories in Japan next month due to parts shortages, reducing its global output for the month by 40%. That news sent many auto stocks lower today -- and vulnerable electric-vehicle start-ups suffered some of the largest declines.

There are two separate issues here. First is the ongoing global shortage of semiconductors, a result of high demand for consumer electronics during the COVID-19 pandemic. The chip shortage has already forced many automakers, including Tesla and Ford Motor Company, and electric vehicle suppliers including Romeo Power, to reduce or postpone production. 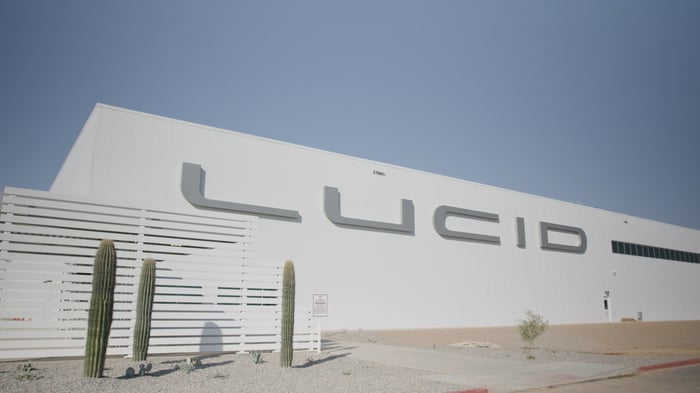 Will companies like Lucid have to postpone their production starts because of the chip shortage? Image source: Lucid Group.

Second, new outbreaks of the delta variant of COVID-19 are forcing supplier factories in Southeast Asia to halt or reduce production, which is now creating shortages of other key automotive components.

Toyota began the year with a significant stockpile of chips and had until recently been able to avoid significant production cuts. But it has now largely depleted that hoard, forcing it to reduce production.

If even mighty Toyota is cutting production, that's a big deal. It's a signal to the rest of the global auto industry (and to auto investors) that the COVID-19-related parts shortages are likely to be with us for a while longer, longer than many auto executives (and investors) were expecting.

That's why these stocks all closed lower today.

For EV start-ups that have been hoping to begin vehicle production by the end of 2021 (a category that includes Lordstown, Lucid, and Nikola) the prospect that the chip shortage could linger well into 2022 -- and the new possibility of extended shortages of other Asian-made components -- raises hard questions.

If the start of production, or the ramp-up to full production, has to be delayed by several months, are they at risk of losing orders? Will they need more capital to stay afloat until they can generate significant revenue?

Investors will be hoping to hear answers soon.

Why Lucid Shares Are Dropping by Double Digits This Week
349%