Doing business as usual will be more than enough to make this company a strong investment.

You've probably heard that robots are the future for everything from manufacturing to retail distribution. But have you ever considered that they might be lucrative investments in the present?

Intuitive Surgical (ISRG 4.48%) sits at the intersection of high-tech robotics and healthcare, and that's one of the many reasons why it's an exciting growth stock. Still, with a market cap in excess of $123 billion, investors are right to be skeptical about the stock's prospects for triple-digit percentage growth. Could Intuitive Surgical be a powerhouse for your portfolio with a relatively small initial investment, or is this stock's growth story approaching stagnation? Let's investigate by taking a look at its business model to start. 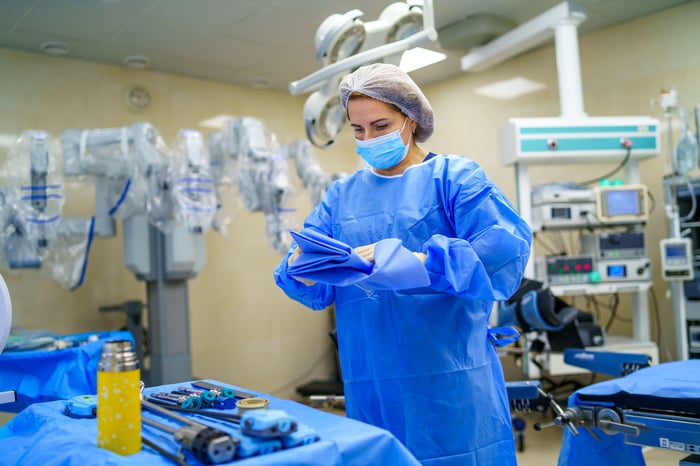 Big growth is more than feasible

Overall, Intuitive Surgical is primed to experience consistent and significant growth because of how it makes its income.

In case you aren't familiar, its main product is the da Vinci line of robotic surgical suites, which surgeons control from a station in the operating room. It also sells maintenance contracts and an ever-increasing selection of robotic surgical tools to use in conjunction with its da Vinci units. In total, these three product categories made the company $5.16 billion in trailing revenue, 77% of which is recurring.​

For investors seeking growth stocks, there's nothing sweeter than a rock-solid revenue base. Importantly, there are a few different things that contribute to Intuitive's aggressive expansion of that base.

The most obvious is sales of its surgical suites, but that's just the start. Once a hospital has purchased a da Vinci unit and trained its surgeons, it's safe to say that it won't be buying a similar unit from competitors.

So, when Intuitive develops new surgical tools to expand the range of procedures performable with the robot, existing customers are highly likely to be interested in expanding the capabilities of the platform they own. Likewise, the more a hospital utilizes its surgical robotics, the more it'll need maintenance and a steady supply of replacement parts.

All of the above means that each newly installed surgical suite will render a significant amount of revenue over its lifetime, and the company is constantly installing more with each quarter. In the second quarter of 2021, there were 10% more da Vinci systems installed globally than in Q2 of 2020. Assuming that the business will continue to deploy its products at a similar rate, it'll have a massive pool of future sales opportunities to draw from over the next decade.

But will it make investors richer?

I'm of the view that Intuitive's stock will multiply in value well before 2029.

Over the next seven years, a $1,000 investment made today could grow to reach $4,000 in value if the stock expands with a compound annual growth rate (CAGR) of 21.9%. Let's take a closer look at why the stock is likely to grow by at least that much on an annual basis for the next few years.

First, Intuitive's stock has been rising rapidly at an even faster rate over the past seven years. Since August 2014, the stock has grown by 567.5%, giving it a CAGR of about 31.5%. While skeptics might argue that the such a strong performance is unlikely to be repeated on a consistent basis, there is little evidence to suggest that growth is slowing.

Even when including for the sharp drop in income and earnings that occurred when hospitals stopped performing elective surgeries during the first peak of the pandemic, the past three years have seen the company's quarterly revenue rise by nearly 59%, with quarterly earnings before interest, taxes, depreciation, and amortization (EBITDA) increasing by just over 70% in the same period. Likewise, its quarterly free cash flow (FCF) has grown by slightly more than 84% in the last five years, so its financial strength has been steadily increasing over time. 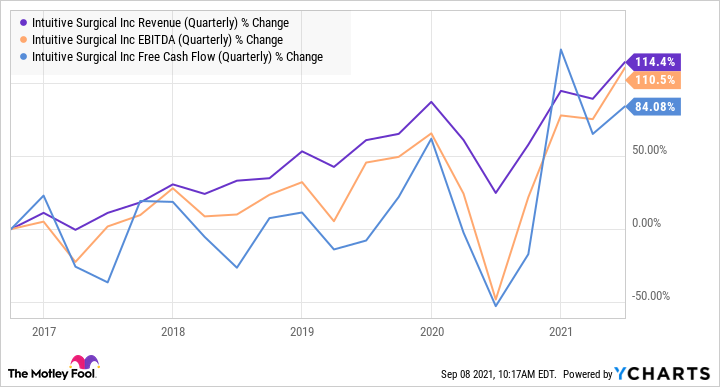 Thus, Intuitive doesn't need to change its business model or optimize its operations to keep expanding. And that means its prospects for being a winning growth stock are secure.

When's the right time to buy?

In my view, there's little doubt that this stock could juice a $1,000 investment today into $4,000 over the next seven years, even if growth does end up slowing slightly. Still, there remains the question of when to make a purchase.

Given the company's ongoing efforts to develop new surgical tools, expand its portfolio of eligible procedures, and deploy more machines internationally, there's a smattering of catalysts for Intuitive's stock between now and 2029. At the same time, there's little chance of a competitor stealing revenue from accessory sales and maintenance for the established base of installed systems.

So, there isn't much to hold investors back from buying the stock today.