The Securities and Exchange Commission could be cracking down on payment for order flow. Here's what that could mean.

The Biden administration has made it clear that consumer protection will be an early priority. In recent months, the Department of Justice shut down a megamerger between Aon and Willis Towers Watson; put Visa and PayPal Holdings under the microscope for their transaction routing; and brought in critics of big tech to lead the DOJ's antitrust division.

Another area under regulatory scrutiny is payment for order flow, with SEC Chairman Gary Gensler telling Barron's he was considering banning the practice. Such a ban would have a significant impact on brokers like Robinhood Markets (HOOD -2.21%), which generates a substantial portion of its income by selling its order flow. Any potential ban would also impact market makers or wholesale firms that rely on order flow data to run their business, such as Virtu Financial (VIRT 0.42%). 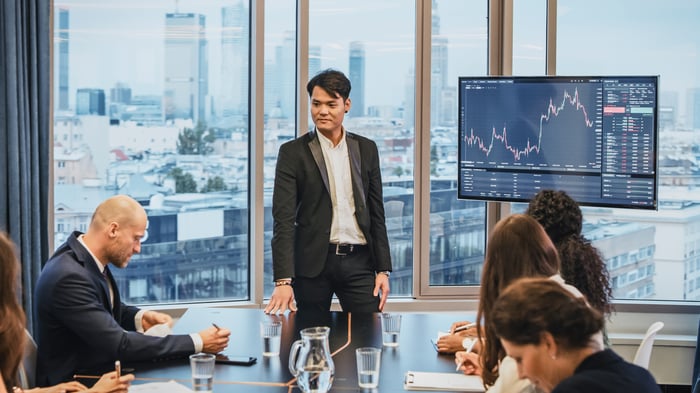 Payment for order flow came under scrutiny earlier this year amid the GameStop stock surge, in which an influx of retail investors drove up the price of the stock more than 1,600% over a few weeks. This spike in GameStop's price put stock trading -- especially the gamification of trading, one of Robinhood's hallmarks -- on Congress' radar.

Here's how payment for order flow works. A broker like Robinhood might not charge its users a commission to execute trades, but it still makes money on them by sending this flow of orders to what's known as a market making firm. The market maker collects the difference between the price the buyer agrees to pay and the price the seller agrees to accept (also known as the bid-ask spread). The broker gets a portion of this spread as a payment for its order flow information.

Some argue that selling order flow to these market makers creates a conflict of interest, where brokers may be focused on maximizing their own profits rather than getting their customers the best available prices. Robinhood has built its business model on payment for order flow -- this is the reason it was able to offer commission-free trading well before any other major brokers. And this is what's attracted the attention of regulators.

Robinhood and Virtu won't go down without a fight

Gensler is so concerned because of the influx of retail traders flocking to platforms like Robinhood. Gensler ultimately wants to make the market more transparent, given that half of trading is done off-exchange in "dark pools," or private exchanges, to market makers like Virtu Financial.

Robinhood says 79% of its revenue comes from routing its users' trade orders to market makers. Ultimately, Gensler and other advocates are concerned that customers could end up with a less favorable stock price as brokers steer orders to specific firms with more favorable payout agreements.

Doug Cifu, CEO of Virtu Financial, defended payment for order flow back in February in an interview with Bloomberg Intelligence's Larry Tabb. During this discussion, Cifu pointed out that retail investors saw a $3.7 billion price improvement as a result of the payment for order flow while brokers made $1.3 million from selling this order flow, based on data from SEC company reports and Bloomberg Intelligence data.

"We have spent billions of dollars building infrastructure to connect 250 markets across asset classes," Cifu said, adding, "the rebate is a small price to pay." He went on to say that the payment for order flow has allowed brokers to charge zero commissions, which has helped bring many new participants into the market.

More transparency may be on the horizon

Robinhood's business is heavily reliant on selling order flow to generate revenue. This also isn't the first time Robinhood has faced scrutiny from regulators. Last year, the SEC fined Robinhood $65 million for providing "misleading information to customers about the true costs of choosing to trade with the firm" and failing "to obtain the best reasonably available terms."

The company could luck out and only see added disclosure requirements as a result of SEC regulations. However, these disclosures could impact the company's customer base if they feel alienated by the broker. Robinhood is already a highly speculative stock with a lot of volatility, and the increased regulatory scrutiny makes it a stock I'll be staying away from for the time being.