Johnson & Johnson's Invega Hafyera was approved by the FDA as the first and only twice-yearly injectable treatment for schizophrenia.

Let's take a look at the data that led the FDA to approve the third drug in Johnson & Johnson's Invega franchise, as well as how much of the schizophrenia market Invega Hafyera could capture. 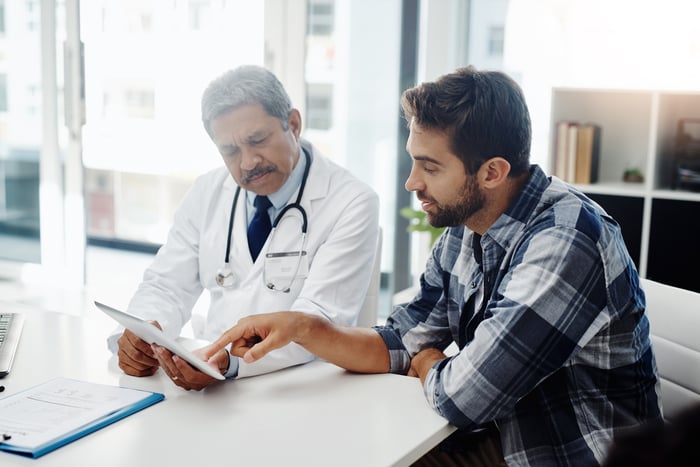 Schizophrenia is a mental disorder that causes patients to interpret reality abnormally. The condition often results in a mix of symptoms, including hallucinations, delusions, and behavior that interferes with daily functioning, which can be disabling.

Medication noncompliance plays a major role in adverse patient outcomes, and it can be caused by forgetfulness and distractibility. This is where Invega Hafyera could be conducive to improved treatment results for schizophrenia patients.

With just two doses a year, it will be less burdensome than ever for schizophrenia patients to live a higher quality of life by avoiding a relapse in their condition and spending minimal time coordinating their care.

It should then come as little surprise that efficacy and convenience were key to the FDA's approval of Invega Hafyera.

With the efficacy and convenience of Invega Hafyera now abundantly clear, let's turn our attention to the potential of the drug.

Even before the FDA approval of Invega Hafyera, it's important for readers to understand that the Invega franchise consisting of once-monthly Invega Sustenna and four-times-a-year Invega Trinza was already a blockbuster for diversified healthcare company Johnson & Johnson.

To this point, market research company Prophecy Market Insights estimates that the global schizophrenia drug market will compound at 2.7% annually from $7.5 billion in 2020 to $9.8 billion in revenue by 2030.

I believe that Invega Hafyera will mostly complement the other two drugs in the franchise rather than cannibalize sales.

This is because Invega Hafyera imposes a minimal burden on the schedules of schizophrenia patients while maintaining its efficacy. This means that the drug will likely become a hit with those who have been noncompliant with other medications in the past due to forgetfulness and busy schedules.

It's for this reason that I believe Invega Hafyera will be able to carve out its own 5% share of the schizophrenia drug market (also factoring in mild sales cannibalization of Invega Sustenna and Invega Trinza). This would translate to an additional $500 million in annual revenue for Johnson & Johnson by the end of the decade.

While this would work out to only about a half of a percent of Johnson & Johnson's forecasted revenue for this year ($93.8 billion to $94.6 billion), Johnson & Johnson has a number of other fast-growing drugs in its pharmaceutical segment, which is its largest at 54.3% or $24.8 billion of H1 2021 sales.

Johnson & Johnson's psoriatic arthritis, psoriasis, Crohn's disease, and ulcerative colitis drug Stelara saw its first-half sales soar 25.8% from $3.52 billion in 2020 to $4.42 billion this year. And because FiercePharma anticipates that Stelara won't face intense competition until 2025 or 2026, the drug still has a great deal of growth ahead of it in the next five years.

Another steadily growing immunology drug for Johnson & Johnson is the plaque psoriasis and psoriatic arthritis drug Tremfya, whose first-half revenue spiked 40.6% year over year from $638 million last year to $897 million this year.

Darzalex, the multiple myeloma drug in Johnson & Johnson's oncology portfolio, managed to grow its first-half sales at an astonishing 52.2% year-over-year clip from $1.84 billion last year to $2.80 billion this year.

Johnson & Johnson may not be the cheapest healthcare stock at 18 times this year's earnings per share forecast of $9.67, but there is reason to believe that the company is trading close to its fair value considering its quality.

Johnson & Johnson is trading at a price-to-free-cash-flow ratio of 20.4, which is only slightly higher than its 13-year median-price-to-FCF ratio of 19.6 per Gurufocus.

Add in the 2.4% dividend yield that is likely to grow at around 6% annually, which is arguably the safest dividend in all of healthcare, and there's a lot for long-term investors to like about Johnson & Johnson.