Please ensure Javascript is enabled for purposes of website accessibility
Log In Help Join The Motley Fool
Free Article Join Over 1 Million Premium Members And Get More In-Depth Stock Guidance and Research
By Kody Kester – Sep 11, 2021 at 9:18AM

Keytruda received its second regulatory approval in China for the treatment of esophageal cancer.

Earlier this month, China's National Medical Products Administration (NMPA) announced the approval of Merck's (MRK 0.64%) Keytruda, in combination with platinum- and fluoropyrimidine-based chemotherapy, as a first-line treatment for patients with locally advanced unresectable or metastatic carcinoma of the esophagus or gastroesophageal junction (GEJ).

Overall, this approval marks Keytruda's eighth indication across five different cancers in China. The regulatory approval comes 15 months after the drug was initially approved as a second-line monotherapy for the treatment of patients with another form of esophageal cancer.

Let's examine the burden of esophageal cancer in China, the efficacy of Keytruda in treating locally advanced unresectable or metastatic esophageal or GEJ carcinoma, and the amount of additional revenue that this label expansion could create for Keytruda. 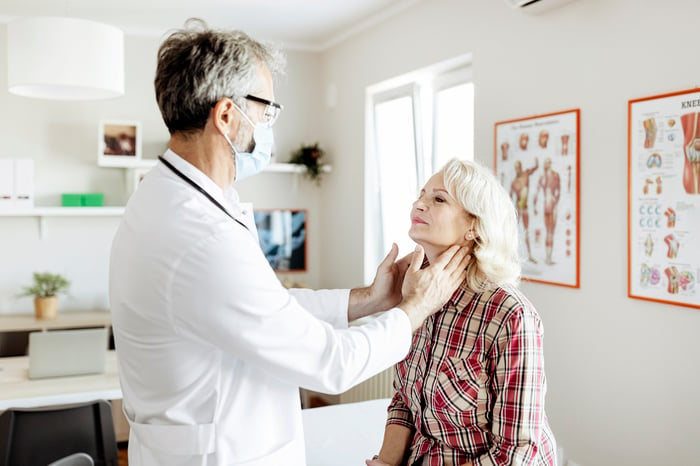 Keytruda proved itself once again

Before going over the data of the Keytruda-and-chemotherapy pairing for patients with locally advanced unresectable or metastatic carcinoma of the esophagus or GEJ, it would be helpful to first explain the terms and the prevalence of this condition within China.

"Metastatic carcinoma of the esophagus" means that the cancer has spread from its origin in the esophagus (the tube-like structure that extends from the throat to the stomach) to other parts of the body, such as the lungs or brain.

The common symptoms of esophageal cancer, which present more frequently in later stages, include coughing, hoarseness, and difficulty or pain with swallowing. Despite the progress made in treating esophageal cancer in recent years, the five-year survival rate in China remains quite low, at just 39%.

Merck notes that in China, esophageal cancer is "the fifth most commonly diagnosed cancer and the fourth leading cause of death from cancer." Over 324,000 cases of esophageal cancer were diagnosed in the country last year, and 301,000 deaths resulted from the disease during that time.

Fortunately, Merck's Keytruda may be able to help reduce deaths from esophageal cancer. In combination with standard chemotherapy, the drug was found to reduce the risk of death in patients with locally advanced and unresectable esophageal carcinoma or metastatic carcinoma of the esophagus by 27% compared to chemotherapy alone.

Keytruda and chemotherapy also helped patients to live without any progression or worsening of the disease -- referred to as progression-free survival (PFS) -- for longer than just chemotherapy.

The PFS period with the Keytruda-and-chemotherapy combo was 6.3 months, which was superior to the 5.8 months for chemotherapy alone. For better context, it's worth noting that even on the low end of the PFS spectrum in those receiving Keytruda and chemotherapy, patients went 6.2 months without a progression of their symptoms. This is better than the maximum PFS period of 6 months that patients receiving only chemotherapy experienced during the clinical trial.

But can the approval also be a boon to Merck's shareholders?

Let's assume the esophageal cancer market in China is about the number of patients who were diagnosed with the disease last year: 324,000. Of course, there are hundreds of thousands (at least) of other patients diagnosed before last year who are still alive and potentially in need of a new, more effective treatment. But to be conservative, I'll stick with 324,000 esophageal cancer patients.

While Keytruda's annual price in China was recently about $80,000, I'll trim this figure considerably, to an annual price of just $15,000. This is because it's inevitable that in a market as large as China, Keytruda will eventually face more intense competition from Chinese biotech firms on oncology-drug pricing across indications such as esophageal cancer. For instance, Shanghai Junshi Biosciences' oncology drug for melanoma (a form of skin cancer), Tuoyi, only cost $27,000 annually when it was launched in December 2018.

With all of this in mind, I believe that the additional esophageal cancer indication for Keytruda will mean an extra $700 million in annual revenue for the company, whose 2020 sales totaled $48 billion.

More than just a leader in oncology

Pharma stock Merck continues to rack up approvals for Keytruda in markets scattered throughout the world.

Here in the U.S., Keytruda, in combination with Merck and Eisai's (ESALY 2.50%) Lenvima, was approved just last month by the U.S. Food and Drug Administration (FDA) to treat patients with advanced renal cell carcinoma.

While Merck's oncology segment and its first-half revenue this year of $8.86 billion accounted for a major part of the company's $22.02 billion in total revenue, Merck's vaccine and animal health segments were almost equally as important in how the company generated revenue.

Merck's quality collection of businesses should provide earnings stability for the company in the years ahead. That's a key reason that Merck is one of the largest healthcare holdings in my portfolio.