Please ensure Javascript is enabled for purposes of website accessibility
Log In Help Join The Motley Fool
Free Article Join Over 1 Million Premium Members And Get More In-Depth Stock Guidance and Research
By Rhian Hunt – Sep 12, 2021 at 9:13AM

The company might have some "special sauce" giving it better prospects than its rivals.

While the beer market as a whole has been slowly losing its fizz for years, a presentation by Constellation Brands (STZ 0.28%) showed the company might be poised to thrive going forward. The presentation, given at the Barclays Consumer Staples Conference on Sept. 8, was upbeat in tone and highlighted the advantages Constellation believes will bring it ongoing growth in the short and long term. The market seemed to agree as the stock jumped following the presentation. Here are four takeaways investors can use to judge if the company's bullish outlook is justified.

1. It's focusing on high-end beer and wine

As part of its growth strategy, Constellation is focusing on high-end beer and wine where consumer demand is growing rapidly. It is redirecting resources toward premium categories, which can help it achieve higher margins too. The company's data indicates high-end beer has seen 6% compound annual growth over the three-year period ending in 2020, with similar gains looking back five years and 7% growth in the past decade. Cheaper beers, on the other hand, have seen sales fall 4% to 5% during the same periods. 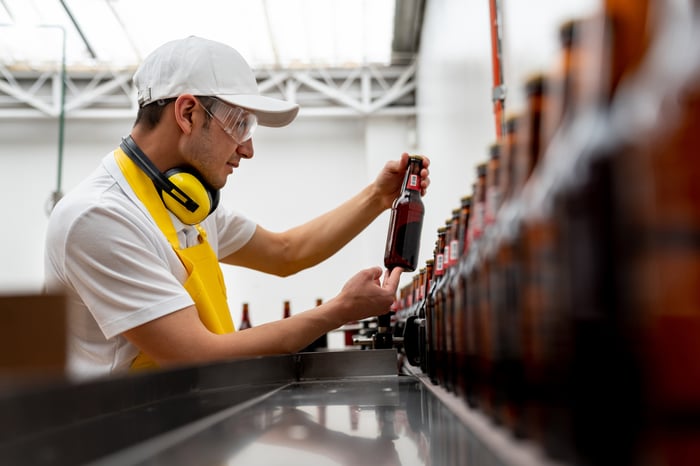 With a similar pattern appearing in wine and liquor, Constellation's strategy of targeting high-end offerings has also helped boost its beer business operating margin from around 32% in fiscal year 2015 to approximately 40% currently. In the wine and spirits segment, management is targeting a 30% operating margin with a focus on wine priced above $11 per bottle and spirits above $15 that should help the company achieve that result.

2. Constellation is appealing to the Hispanic demographic

Constellation is wise to tailor its offerings to this customer base, which should be a significant driver of its long-term gains.

3. It's counting on hard seltzer sales to mushroom

Demand for hard seltzer emerged as a major 2020 trend as the COVID-19 pandemic swept across the world. Based on data from the 52 weeks ended May 16, 2021, Constellation believes increased consumption will drive at least 55% of the opportunity in this beverage category with people switching from beer accounting for another 20%. The company also cited data calling for sales of hard seltzer cases to soar from 175 million in 2020 to 450 million in 2025.

But weighing against Constellation's optimism here is the recent downturn in hard seltzer demand for Boston Beer. Its stock plunged 20% in August, and that decline has continued in September as weakness on the hard seltzer front caused the maker of Truly to withdraw its guidance.

4. It has a solid partnership in the cannabis industry

Rather than remaining in the narrow lane of beer and wine, Constellation has also made a significant effort to branch out into the growing cannabis industry. It acquired a stake in Canadian company Canopy Growth (CGC -2.16%) and continues to work actively in partnership with Canopy to exploit a possible multi-billion opportunity in cannabis-infused drinks. Canopy Growth is poised to enter the vast U.S. market as soon as the federal ban on marijuana is lifted, which at this point may only be a matter of time.

Constellation's investor presentation points to Canopy's goal of delivering 40% to 50% compound annual revenue growth from fiscal 2022 through 2024. It also notes Canopy will generate positive EBITDA and cash flow at various points during the same period. Supporting this sunny outlook for the market, Constellation believes there will be a worldwide addressable market for cannabis products worth $55 billion by 2023 with 90% of that opportunity concentrated in Canada, the U.S., and Germany.

While Constellation's expectations for hard seltzer may be overly bullish, that is just one piece of a much bigger strategy in which the company is adapting to changing market conditions. Looking at its focus areas overall, Constellation is laying the groundwork to remain a long-term winner among beverage stocks.