Please ensure Javascript is enabled for purposes of website accessibility
Log In Help Join The Motley Fool
Free Article Join Over 1 Million Premium Members And Get More In-Depth Stock Guidance and Research
By George Budwell – Sep 13, 2021 at 11:22AM

A lost supply agreement for a partner's COVID-19 vaccine is hurting the biotech's shares today.

Dynavax Technologies (DVAX -2.31%), a mid-cap vaccine developer, saw its shares sink by as much as 15% in premarket trading Monday morning. The biotech's shares hit the skids in early morning action today after the company's French partner Valneva SE (INRL.F) announced that the U.K. government had terminated the supply agreement for its COVID-19 vaccine candidate known as VLA2001.

Dynavax's shares are taking a big hit from this news because the experimental vaccine uses the biotech's adjuvant CpG 1018. An adjuvant is a molecule used to boost the immune response of a vaccine. As of 10 a.m. EDT on Monday, Dynavax's shares are still down by a hefty 13% in the wake of this news and Valneva's equity is faring even worse, with the biopharma's American depositary receipt shedding approximately 40% of its value on this update. 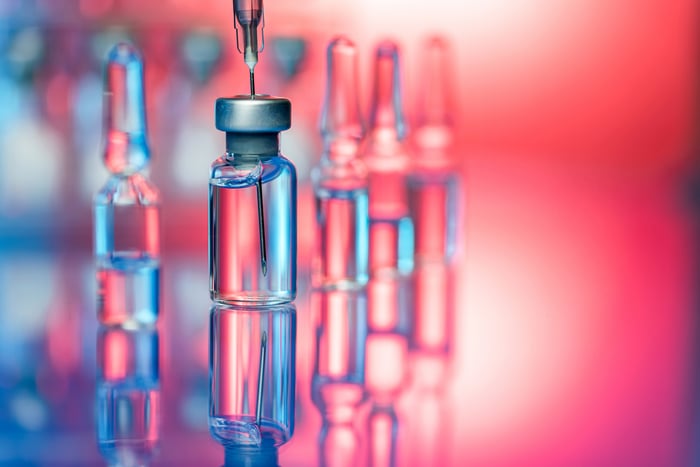 Dynavax's brain trust largely downplayed this news during the company's press release on the matter, perhaps for good reason. In the grand scheme of things, this supply agreement termination probably won't amount to a major loss for the biotech. Dynavax, in fact, reiterated this morning that it still expects to generate approximately $300 million to $400 million in 2021 aggregate revenue from its various supply agreements for CpG 1018. That's a respectable chunk of change for a biotech with a market cap of less than $1.7 billion at current levels.

Is Dynavax stock a bad-news buy? Investors seem to be taking this news to mean that the biotech's other supply agreements for CpG 1018 may now be in danger. As there is no actual evidence to back up this assertion, shareholders may want to take this unfortunate update in stride. In short, if you liked Dynavax's stock before this news, there's no reason to suddenly change your mind. Therefore, this beaten-down biotech may indeed be worth scooping up on this double-digit pullback.