Please ensure Javascript is enabled for purposes of website accessibility
Log In Help Join The Motley Fool
Free Article Join Over 1 Million Premium Members And Get More In-Depth Stock Guidance and Research
By Billy Duberstein – Sep 14, 2021 at 6:45AM

Software is a hot sector, but there are bargains to be found amid business model transitions.

"Software is eating the world," said noted venture capitalist Marc Andreessen back in 2011. Judging by the booming revenue growth and stock market appreciation of many software stocks over the past decade, he was most certainly right. That's why, after a decade of cloud and software disruption, many software winners now trade at very lofty valuations, often 20 times sales or more.

However, some quality software stocks can be had for much less, even though they have attractive products and outlooks. How? Well, several older software players are currently going through business model changes. Some are switching from perpetual licenses to annual subscriptions, or transitioning to a cloud-based model.

These transitions can affect headline revenues, even if the underlying business is strong -- and that can lead to opportunity for investors. Here are three high-quality software stocks to be had on the cheap today. 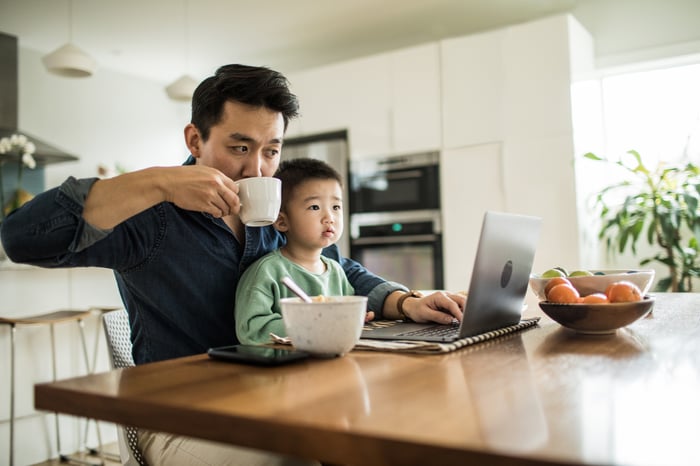 Observability software company Splunk (SPLK -0.06%) makes software that enables large enterprises to survey their IT infrastructure, network, and security in real time, helping to identify any issues that may arise with customer- or employee-facing applications. Since enterprises are only becoming more and more distributed and digital, observability tools like Splunk's are growing more important.

Splunk is undergoing not one but two transitions at once: from selling perpetual licenses to subscriptions, and beginning to deliver its software on the cloud, as opposed to on-premises data centers.

The company began in its transition later than some -- about two years ago, in fact. That means the main impact of the transition happened last year, when top-line revenue declined 5% on a GAAP basis. That's because selling a perpetual license for many years recognizes all that revenue up front, whereas annual subscriptions spread the revenue out over the length of the term. So revenue can fall when a business makes this transition.

However, it looks as though Splunk is getting through the worst of the impact. Revenue growth has turned positive this year, as Splunk's cloud offerings have just exceeded 50% of total bookings. While overall revenue grew 23%, the company's total annual recurring revenue (ARR) growth, which is a better indicator of overall business growth, was higher, at 37%. And cloud-based ARR was up a whopping 72%.

Despite this improvement, Splunk still trades about 33% below its all-time high set a year ago, and at roughly 8 times its projected ARR for this fiscal year. In the software world, that's a bargain for a company showing accelerating cloud growth.

One stock that has not struggled recently is Nutanix (NTNX -0.17%), which is up nearly 20% over the past month and up 34% on the year. However, the stock still trades about 33% below the all-time highs set back in 2018 and trades for only around 6 times sales – practically a value stock among software-as-a-service companies. 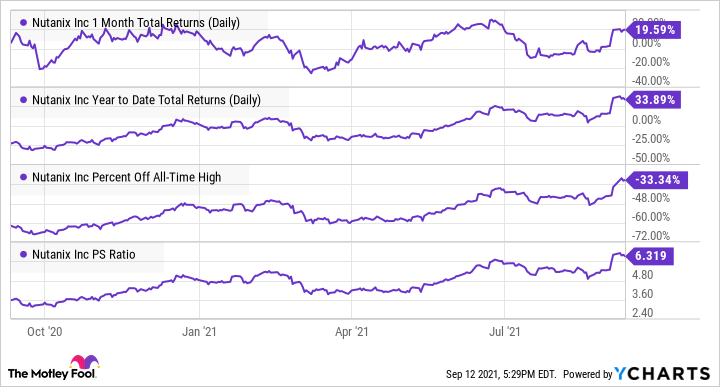 Nutanix is a leader in hyperconverged infrastructure, which should grow by leaps and bounds over the next few years. Nutianix's HCI offering allows corporations to seamlessly work across multiple clouds and their own data centers from a single interface. Since most enterprises are eager to not get locked in to a single cloud provider, Nutanix's offerings are extremely valuable. In addition, Nutanix has developed new products, such as its database-as-a-service offering. Last quarter, 41% of new deals involved at least one "emerging" product.

Like Splunk, Nutanix used to sell its software in a perpetual license tied to a device, along with hardware. But also like Splunk, Nutanix is transitioning to a software-as-a-service model, and that has affected its GAAP results. In its recent fiscal year, which just wrapped up, revenue grew only 7%, but again, that was affected by the transition to a subscription model.

More importantly, annual contract value grew a healthier 26%, while annual recurring revenue surged 83%, showing that customers are rapidly converting to the company's more modern offerings. While Nutanix is still losing money on the bottom line, which may explain the stock's discount, free cash flow losses improved from $249.4 million in fiscal 2020 to $158.5 million in 2021, and both gross and operating margins improved.

Nutanix started on its business model transition in 2018, which explains the stock's fall from prior heights; however, recent results have been strong, and customer adoption of new subscription offerings has led to a surge in 2021. It wouldn't be out of the question for the stock to continue making its way back to prior heights in due course. 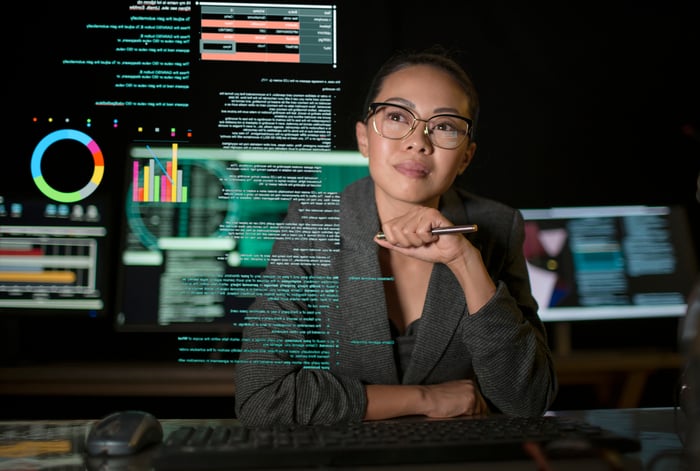 Another software stock with misleading financials is Alteryx (AYX -1.12%), a leader in data analytics software. Alteryx has made a transition from perpetual licenses to subscriptions, but new accounting rules give Alteryx's financial results another quirk that can mislead investors.

Until now, Alteryx has primarily been deployed on-premises, not in the cloud, with lots of service performance obligations. So under accounting standard ASC 606, Alteryx has to recognize 35%-40% of a contract up front, with the rest coming ratably over time.

One can see how, as the company gets larger, that will start affecting revenue, as more and more contracts transition to the ratable portion of the contract. When that happens, revenue can decelerate or even decrease, just because of that accounting quirk. Furthermore, Alteryx has been moving more customers to shorter-duration but less discounted terms. A one-year contract will recognize much less revenue up front than a three-year contract, even if the annualized revenue is higher for the one-year contract.

These factors conspired to cause Alteryx's revenue to dip last year, but the company is now making its way through the transition, with revenue up 25% last quarter. More importantly, annual recurring revenue was up an even greater 27%, and management projects ARR to accelerate in the back half of the year.

Yet Alteryx's stock dipped after its recent earnings report, as it lowered its revenue guidance for the year. However, that was basically entirely due to its salesforce's focus on going after shorter-duration deals, which actually have a higher annual contract value than longer-term but more-discounted deals. Notably, management didn't change its outlook for ARR, which is much more important in light of Alteryx's strange accounting.

Alteryx is also working to transition its offerings from on-premises to the cloud, so there is some uncertainty around that transition as well. Yet the stock is so far below its highs, it's probably incorporating difficulties into the price. In fact, Alteryx trades at more than 50% below its all-time high set back in the summer of 2020, and the stock goes for just 7.7 times this year's projected annual recurring revenue.

Data analytics software is a long-term growth industry, and Alteryx has a strong net retention rate of 120%. Given its discounted stock, it's another bargain-priced software stock with a positive future to be had in the market today.