Please ensure Javascript is enabled for purposes of website accessibility
Log In Help Join The Motley Fool
Free Article
Join Nearly 1 Million Premium Members And Get More In-Depth Stock Guidance and Research
By Will Healy – Sep 15, 2021 at 10:17AM

GrowGeneration is a growth generator on multiple levels and it belongs on investor watch lists.

High-growth stock names generally do not sell at a discount, but GrowGeneration (GRWG 5.53%) increasingly looks like an exception to the norm.

The Denver-based hydroponics supplier has lost more than half of its value since February. Nonetheless, it supplies a cannabis industry that is forecast to have a compound annual growth rate of 27% through 2028, according to Grand View Research. Additionally, with massive growth in past quarters that will probably continue for the foreseeable future, it appears the current sell-off could create an opportunity for growth-oriented investors. 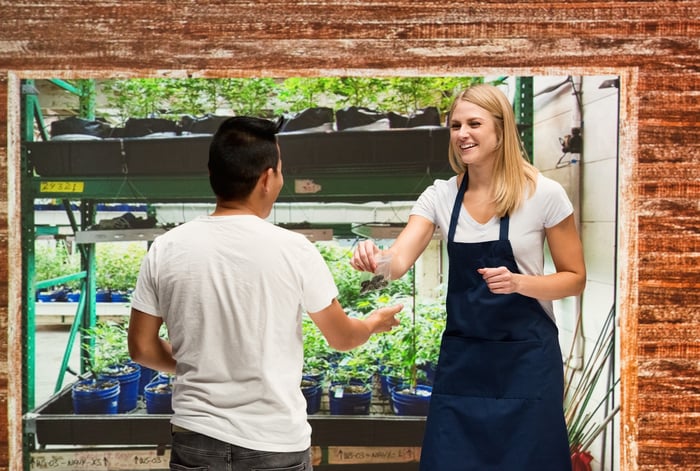 One thing investors should really keep in mind is that GrowGeneration is actually more of a retail stock than a cannabis play. It's true that this hydroponics supplier offers the supplies and equipment needed by marijuana growers. And it has created or bought private label marijuana products, selling over 10,000 items that continue to draw customers to its e-commerce site and stores.

Such varied products make it distinct from the hydroponics supply aisles found in your average Lowe's or Home Depot stores. Those larger retailers tend to act more as generalists who cannot offer the vast array of supplies and equipment available at GrowGeneration.

And while approximately 2,400 hydroponics stores exist, according to IBISWorld, nearly all are small enterprises, leaving a market ripe for a larger, consolidated operation like GrowGeneration to emerge as the leader in the industry.

Although its 60 stores may not sound like a large footprint, it stretches from the West Coast to Florida, and its store count has more than doubled since the second quarter of 2020. Moreover, management has announced a goal of operating 100 stores by 2023 and eventually expanding to all 50 states.

The growth generation as GrowGeneration

Customers seem to like what GrowGeneration is selling if its financials are any indication. The company brought in $216 million in revenue in the first half of 2021. This represents a 183% increase compared with the first six months of 2020. That increase allowed the company to bring in almost $13 million in net income for the first half of the year, far exceeding the $480,000 earned in the first six months of 2020. This occurred as operating expenses grew at 121% during the period, though the $4 million increase in income taxes during that time partially offset the nearly $17 million in pre-tax income gains.

Moreover, GrowGeneration stock sells at a nearly 60% discount from its February high, primarily on valuation and fears of slowing growth. Still, the sell-off looks increasingly like an overreaction as 2021 revenue forecasts of $455 million to $475 million would mean a 154% annual increase in revenue at the midpoint.

Furthermore, the recent drop in the stock has taken its current P/E ratio to just below 100. While that may exceed slower-growth retailers like Home Depot with a 23 P/E ratio, that multiple may appear cheap when considering the triple-digit percentage revenue growth, especially since it has reached its most reasonable valuation since before the pandemic.

GrowGeneration offers both growth and profits seen by few other stocks in the cannabis industry. Admittedly, some investors may stay away due to the falling stock price and higher P/E ratio. Nonetheless, the offbeat cannabis stock continues to benefit from triple-digit percentage revenue growth as it consolidates a retail segment critical to this fast-growing industry. With rising sales and an expanding store footprint, investors may one day look back at today's price as a lucrative buying opportunity.

3 Reasons to Consider GrowGeneration Amid a Mixed Earnings Report
376%