Innovation isn't just about what a company sells but also about how management runs the business. Big data software company Palantir Technologies (PLTR -2.54%) is getting creative, planting seeds now that could yield revenue growth down the road.

The stock receives much attention from Wall Street, but don't let that alone push you to consider Palantir for your portfolio. Here are three reasons Palantir is a great investment idea for long-term investors.

Data is the new oil. It's valuable, but if unrefined it cannot really be used. It has to be changed into gas, plastic, chemicals, etc. to create a valuable entity that drives profitable activity; so must data be broken down, analyzed for it to have value. 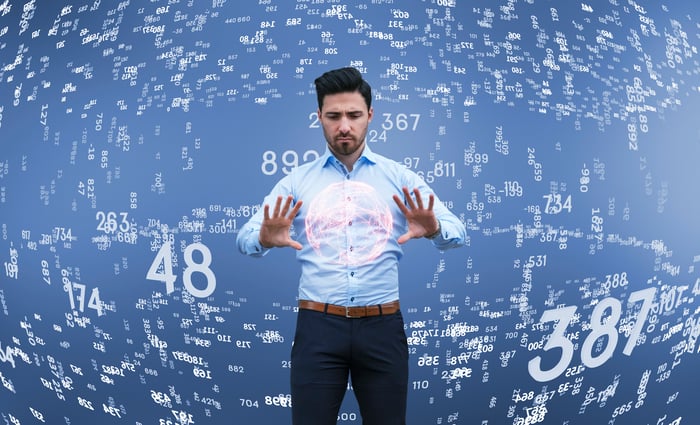 Humby said this before Apple launched the iPhone, when the internet was in its infancy -- the very first year that cloud provider Amazon Web Services launched and six years before Tesla sold its first Model S.

In fact, it's estimated that 90% of the world's data was created in the past two years because the growth of data is exponential. There are constantly more data points being recorded, more things producing data points, and more uses for that data.

The problem is that data has been created for far longer than organizations have thought of utilizing it or had the tools to do so. Roughly 80%-90% of the world's data is unstructured, or as Humby puts it: "unrefined."

It's estimated that the global market opportunity for big data is worth more than $200 billion today and could cross $450 billion over the next five years. Data never expires; more is only created over time, which means the services that can manage it could only see increased demand moving forward.

Whereas the government contracts are typically for in-demand projects, Palantir takes a long-term approach to its commercial growth strategy. It has made equity investments in several small companies, many of which went public (or have been announced as deals) via special purpose acquisition companies, or SPACs.

Palantir continues to invest, with satellite data company BlackSky Technology being the most recent, and we will see an updated breakdown of Palantir's investments in its next quarterly filing.

3. The financials are rapidly improving

Palantir brings customers onboard its platform often at a loss, to prove itself a vital component of its customers' operations. As Gotham/Foundry expands and increases its value to the customer, Palantir's revenue and the relationship become increasingly profitable.

We see evidence of this in Palantir's financials. The revenue from its top 20 customers grew 36% year over year in Q2 to $39 million each. These larger customers are now helping the company's overall profitability.

After burning $232 million in cash (negative free cash flow) in the first six months of 2020, Palantir has produced a positive free cash flow of $201 million over the first half of 2021, a dramatic turnaround. Investors should look for this to continue trending up and Palantir's free cash flow streams to begin building up its balance sheet for future opportunities.

A pricey but compelling stock

Trading at a price-to-sales ratio of 28 using the company's expected full-year 2021 revenue of $1.5 billion, it's a fair argument that Palantir stock is expensive. Management is pursuing 30% or higher revenue growth over the next four years, and it could surpass that if these small customers grow fast enough over the years to come.

Palantir seems like a compelling investment idea despite its expensive valuation because of the sheer size of the "big data" market opportunity, as well as the company's accelerating free cash flow growth. CEO Alex Karp needs to continue to execute Palantir's growth strategy, but long-term investors could still be rewarded moving forward.