Please ensure Javascript is enabled for purposes of website accessibility
Log In Help Join The Motley Fool
Free Article Join Over 1 Million Premium Members And Get More In-Depth Stock Guidance and Research
By Justin Pope – Sep 15, 2021 at 6:22AM

Shares of Affirm are up more than 50% over the past month. Here is why Affirm is the talk of Wall Street.

The spotlight has brightened on buy now, pay later, an increasingly popular consumer financing structure that allows e-commerce customers to buy things and pay for them over a number of fixed payments.

Affirm Holdings (AFRM -3.82%) is a big player in the buy now, pay later industry. The stock has risen more than 50% over the past month; here are three reasons investors are jumping on board with Affirm stock.

Credit cards have been the "go-to" option for consumer borrowing since their invention in the 1950s. It's estimated that 61% of American consumers have at least one credit card, and the typical consumer has four of them. 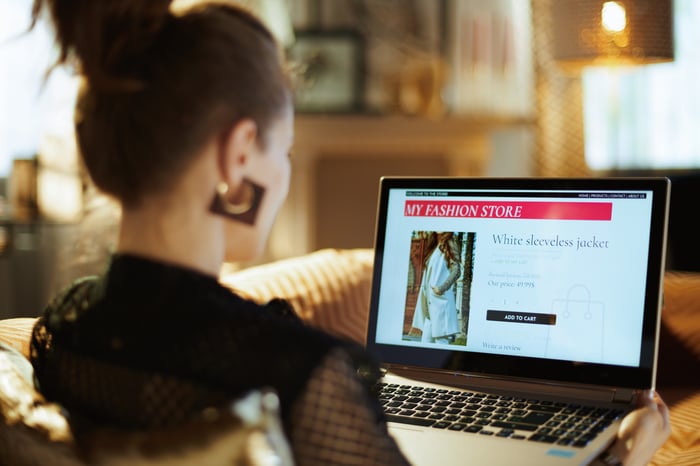 But credit card companies make their money from keeping consumers in debt. In some cases, they charge high interest rates and various fees like late fees, membership fees, and balance transfer fees.

Buy now, pay later is an emerging financing method, where consumers can choose short-term financing for purchases, paying weekly, bi-weekly, or monthly for a set number of fixed payments. In many cases, buy now, pay later charges no interest, and in Affirm's case, the company doesn't charge any hidden fees, not even late fees.

Buy now, pay later financing has proven popular with younger, digitally focused consumers, which could mean years of growth as these consumers age and become the prominent earning class of the economy. One research firm estimated that the global buy now, pay later industry could balloon from almost $91 billion in 2020 to nearly $4 trillion by the decade's end.

So how does a buy now, pay later company like Affirm make money? It functions as a customer acquisition tool for merchants, bringing its 7.1 million consumers to them. Affirm has data-based insights on its members, which it uses to help drive business for its merchant partners. The average consumer on Affirm has an 85% higher average order value on merchant purchases than the overall average. Affirm charges a commission fee on the transactions it powers in exchange for these quality customers. Consumers are happy with flexible and transparent financing, and merchants sell more; it's a win-win for all parties.

Not long ago, Affirm's merchant partners were headlined by Peloton and a long list of higher-end consumer brands. However, the effectiveness of Affirm's platform has drawn in the most dominant retailers in the United States, including Walmart, Shopify, and Amazon. These three partners alone count for more than 50% of all e-commerce sales in the United States. As of the end of Affirm's 2021 fiscal year (ended June 30), the company now has 29,000 merchants.

The momentum of Affirm's merchant network has begun to show up in the company's operating results. It recently wrapped up its 2021 fiscal year, reporting 71% year-over-year revenue growth and hitting $262 million in its 2021 fourth quarter.

It's important to emphasize that Affirm is just getting started, especially with some of these big partnerships. Shopify officially rolled out its Affirm-powered Shop Pay service just a few weeks before the end of Affirm's quarter. The Amazon integration is only in the testing stages at the moment.

Affirm issued guidance for its fiscal 2022 and expects up to $1.19 billion of revenue, which would be 36% growth over 2021. However, the guidance doesn't factor in any contributions from the Amazon partnership or the upcoming launch of its Affirm Debit+ card, a product directly competitive to traditional credit cards.

It isn't easy to speculate on the exact near-term impact these two events will have on the company (which is why management left them out). Yet it seems likely that they will be significant over the longer term, which is why it's important to keep them in mind for long-term investors.

Affirm could have a long way to climb

Affirm's recent quarter helps support the idea that buy now, pay later is becoming an attractive growth theme moving forward. The addition of Amazon and the full rollout of Shopify will only add fuel to Affirm's fire.

Investors are excited about the company's near-term price movement, but the largest rewards may be reserved for patient investors who are willing to give Affirm's multiyear investment thesis the time it needs to play out.