The female-oriented dating app provider could have room to run.

Bumble (BMBL 1.14%) has been a volatile investment since its IPO. The female-oriented dating app maker went public at $43 per share in February, and its stock opened at $76 before hitting $84.60 less than a week after its debut.

Bumble's stock tumbled back below its IPO price in May, but it subsequently rebounded to the high $50s after it posted a strong second-quarter report in August. Could Bumble still help you retire a millionaire over the long term? Let's take a fresh look at the bull and bear cases to find out.

What the bulls will say about Bumble

Bumble owns two apps. Its namesake app, which hosts more paying users and generates most of its revenue, only allows women to make the first move. Its older app, Badoo, is more similar to Tinder and generally more popular in Europe and Latin America. 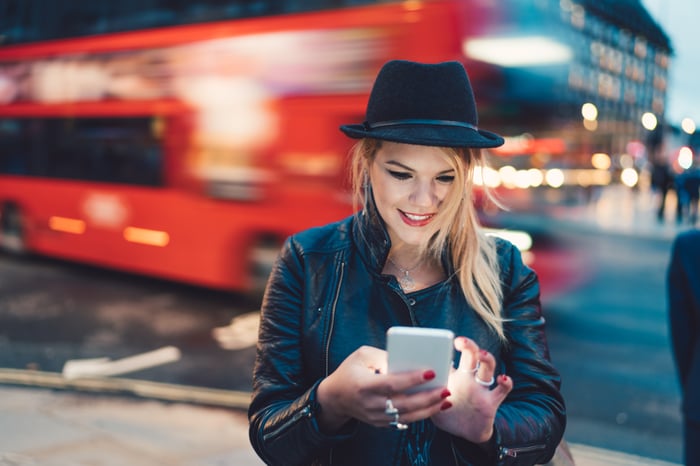 The bulls believe Bumble can carve out a high-growth niche against Match Group (MTCH -2.58%), which owns Tinder, Hinge, OK Cupid, and other popular dating apps. Bumble's share of the U.S. dating app market rose from 10% in 2017 to 19% in 2020, according to Sensor Tower, putting it firmly in second place behind Tinder's 40% share.

Bumble's number of paid users across both apps rose 20% year-over-year to 2.9 million last quarter. Its average revenue per user (ARPU) increased 13% at Bumble and 4% at Badoo. Bumble expects its total revenue to rise 29% to 31% this year, while analysts expect Match's revenue to grow 26%.

Those growth rates indicate there's plenty of room for Bumble's female-friendly platform to grow. Over the long term, Bumble plans to expand into new overseas markets like India, as well as monetize its BFF feature for platonic friendships and Bizz feature for business connections.

Bumble ended last quarter with $252 million in cash and equivalents and $642 million in total debt. That gives it a fairly low debt-to-equity ratio of 0.5.

Bumble could also benefit from a recent court ruling against Apple that will allow companies to integrate their own in-app payment systems to bypass Apple's 15% to 30% cut of App Store fees.

The global online dating market could grow at a CAGR of 8.44% between 2021 and 2025, according to Statista Research. If Bumble merely matches the market's growth rate, it could generate $1.05 billion in annual revenue in 2025.

But Bumble is growing faster than Match and the broader market, and that trend could continue as it gains more users, launches new premium tiers, expands its international business (which generated 43% of its revenue in the first half of 2021), and monetizes BFF and Bizz as non-dating social networks. Bumble could also acquire smaller dating apps to diversify its portfolio and widen its moat against Match.

Bumble's market cap of $10.7 billion is less than a fourth of Match's market cap of $45.5 billion. Bumble trades at 14 times this year's sales, while Match has a comparable price-to-sales ratio of 15. Therefore, Bumble's higher growth rates and lower valuations could give it more room to run than Match.

What the bears will say about Bumble

The bears will note that Match is more diversified and profitable than Bumble. Match offers over a dozen dating apps for a wide range of demographics, while Bumble is still limited to two apps. However, Bumble's narrower focus might also generate stronger growth than Match's scattershot approach.

Bumble isn't consistently profitable by GAAP measures yet, but its adjusted EBITDA is positive and it anticipates 28% to 31% growth this year.

Bumble recently priced a secondary offering that will allow some of its existing shareholders -- mainly affiliated with its top investor Blackstone (BX 0.14%) -- to sell 18 million new shares at $54 apiece. Bumble won't receive any proceeds from the sale, but the bears will claim that the big offering -- which could boost the company's number of outstanding shares by up to 15% -- will limit its upside potential.

They'll also claim that the recent surge in COVID-19 cases could dampen the online dating market's recovery with new restrictions and lockdown measures. Those concerns are valid, but Bumble's 60% year-over-year growth in monthly active users (MAUs) last quarter in India -- a country that is still struggling with the Delta variant's spread -- suggests those fears are overblown.

Whether or not Bumble helps you retire as a millionaire depends on the size of your investment and your holding period. I believe Bumble's stock could double or triple over the next five years if it continues to generate roughly 20% sales growth every year, so it could potentially turn a $500,000 investment into more than $1 million by 2025.

However, I don't think it will generate the kind of higher multibagger returns which would turn a $10,000 investment into more than a million dollars. Investors seeking out those kinds of gains should probably avoid Bumble and Match and find more disruptive companies that generate much higher sales growth.