The stock is cheap and management is buying back shares.

Nintendo's (NTDOY -0.98%) Switch game system has surpassed 85 million units sold to consumers. It's been a massive success for the Japanese gaming brand, but it's getting more difficult for Nintendo to post strong year-over-year growth rates after more than four years since its launch.

After nearly doubling over the last five years, the stock is currently down 24% in 2021. Video game stocks are out of favor with the market right now, but that could represent an opportunity for long-term investors. Nintendo's valuation is starting to look very enticing as the stock is trading at just 13 times trailing-12-month earnings.

Is Nintendo a steal at these levels, or is it a value trap? Let's first look at near-term growth catalysts. 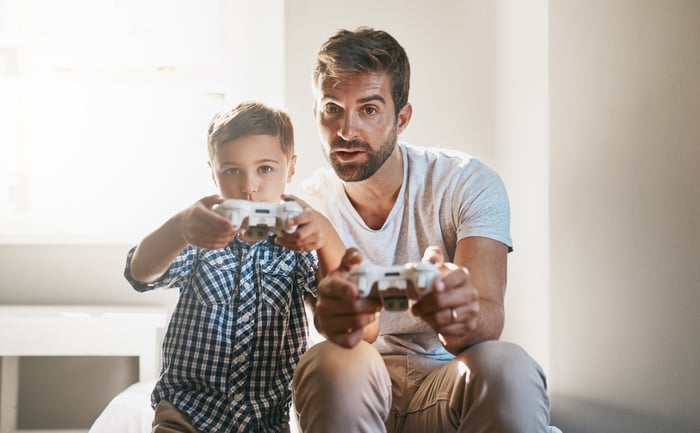 Nintendo has plenty of new releases coming out to drive sales this holiday season. First up is the new Switch (OLED model), launching on Oct. 8 for $349. The model is priced higher than the $299 for the regular Switch and $199 for Switch Lite, but the new version adds some features. As the name suggests, it has a more advanced organic light-emitting diode (OLED) screen that is slightly larger at 7 inches versus the regular Switch's 6.2-inch display. The other notable features are twice as much storage capacity (64 GB) and better sound quality.

Some fans were disappointed that Nintendo didn't upgrade the internal processor. This improvement would have allowed for an even more appealing 4K display, which has become the de facto standard for hardcore gamers and smartphone users and would have likely gotten prospective buyers more excited. But Nintendo felt the need to avoid sticker shock heading into the holidays and skipped the additional cost of a higher-density display.

Nintendo has historically relied on its exclusive software franchises, such as Mario and Zelda, to sell its hardware, as opposed to the other way around of trying to win fans with fancy hardware technology. That's the war Sony and Microsoft are battling right now, with PlayStation 5 and Xbox Series X/S. Nintendo hasn't had a problem selling tens of millions of units in most console cycles by sticking to its user-friendly designs, even if Nintendo's hardware generally trails the advanced graphics technology featured in the other consoles.

It's unclear how well the OLED Switch will sell. Rumor has it that the regular Switch will get a price cut ahead of the holidays, which could keep it the most popular choice for new buyers. While Google Trends shows significantly higher search interest in the PlayStation 5 than the OLED Switch, the Nintendo Switch family of devices overall is receiving way more interest than PlayStation 5, which has outsold Xbox Series X 2-to-1 so far this cycle.

Nintendo has a few games launching this fall to drive hardware sales. Mario Party Superstars launches in late October, but investors should watch the November release of two Pokémon remakes -- Pokémon Shining Pearl and Pokémon Brilliant Diamond -- that should be best-sellers for the holidays.

Nintendo is flush with cash

It's also a bonus that after a profitable stretch of selling over 630 million software titles for Switch, Nintendo ended fiscal 2021 in March with $8.4 billion in cash and equivalents. Management recently announced a stock buyback of 1.51% of the company's total shares to return some of the excess cash to shareholders.

Nintendo also maintains a policy to distribute a third of its operating profit via dividends every year. Management anticipates paying a dividend of approximately $1.70 per share for fiscal 2022, representing an above-average dividend yield of 2.8%.

These are shareholder-friendly moves, especially the decision to buy back shares at these cheap valuation levels. Management is forecasting full-year sales to decline 9% in fiscal 2022, with operating profit expected to drop 22%. Some of that decline, however, is due to tough year-over-year comparisons against the phenomenal sales of Animal Crossing: New Horizons during calendar 2020. Nintendo said that sales of its first-party software titles grew last quarter when excluding the impact of Animal Crossing.

Moreover, the company is currently executing a long-term growth strategy to expand access to Nintendo's intellectual property through movies, merchandise, mobile games, and theme parks, so I don't believe we've seen the end of growth at Nintendo.

The stock sells for a low price-to-earnings ratio of 13 and offers an attractive dividend yield, and there are promising growth initiatives underway to expand the audience for Nintendo's properties. Investors who hold the shares for a minimum of five years have a good chance of earning a solid return on their investment.

Up 7% This Year, This Entertainment Stock Is Still a Screaming Buy
371%