We now live in a world where the word "trillion" is used quite frequently -- and not just when discussing the epic scale of government budgets. A few publicly traded companies have reached trillion-dollar valuations, and many more are worth hundreds of billions. Among these could emerge a new class of companies that join the 13-figure mega-market-cap club.

Which ones could get there in the next decade? Three Motley Fool contributors think Square (NYSE:SQ), Netflix (NASDAQ:NFLX), and Taiwan Semiconductor Manufacturing (NYSE:TSM) have a shot. Here's why.

Fintech benefiting from the proliferation of mobility and cloud computing

Nicholas Rossolillo (Square): Square has been on an absolute tear. The stock is up over 2,100% over the last five years! But even after that epic run, the company still carries a market cap of just $117 billion as of this writing. Given its momentum among young consumers and the proliferation of mobile devices and cloud-based computing systems, I think this fintech could reach a $1 trillion valuation in another decade's time.

Granted, the cat's out of the bag on this fintech leader, and Square is priced for continued rapid growth and dominance in the digital-payments and banking space. Shares currently trade for 8.5 times trailing 12-month sales, or over 18.6 times trailing 12-month sales when excluding the $9.6 billion or so in Bitcoin trading revenue (which doesn't generate much in profit) that the company generated last year. The pending $29 billion all-stock acquisition of Afterpay will also present new expenses that will need to be digested over time.

But Square is nevertheless firing on all cylinders right now. Its merchant ecosystem is rallying as small- and medium-sized businesses that the company caters to adjust to pandemic effects.

Cash App is riding a (tidal) wave of consumer activity. The purchase of a controlling stake in music-streaming service Tidal earlier this year indicates Square sees itself as more than just a digital-banking and money-management app. It has aspirations to power the creator economy and help entrepreneurs and artists realize their dreams.

While integrating Afterpay's buy-now pay-later operation will be a monumental task, it helps round out Square's suite of services with an in-demand credit offering. Throw in the tax-prep service (purchased from Credit Karma) and a burgeoning stock-investment tool through Cash App, and there's little Square won't be able to offer the modern banking customer.

The real kicker here is that Square's banking and payments platform comes bundled in an efficient cloud and mobile service-friendly operation, promising far-higher profit margins someday than a traditional bank. It might take a number of years for Square to fully unlock all of its potential, but the payoff could be huge if it can maintain the momentum it's been riding. Anders Bylund (Netflix): This recommendation won't land me a reputation as a speculative risk taker. Digital-media giant Netflix already sports a market cap of $260 billion, which means that the stock only needs to quadruple in order to reach that trillion-dollar target. 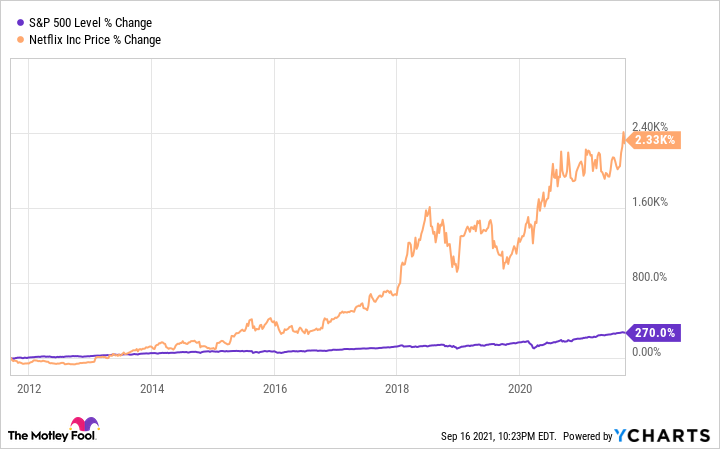 Past performance is no guarantee of future results, but Netflix still has a few growth-boosting tricks up its sleeve. The video-streaming market is still in its infancy as consumers around the world are getting access to high-speed broadband services, devices with decent screens, and reliable subscription-payment services. The company's 209 million paid memberships may sound like a lot today, but that crucial metric should be able to multiply several times over before it peaks.

At the same time, Netflix has room to raise service prices and expand its product offerings. Up next, for example, is an online-gaming service that will start out as a free add-on for existing video subscribers -- much like the company first introduced video streams as a free bonus for DVD-mailer customers.

Honestly, I'll be shocked if it takes Netflix a full decade to reach that lofty trillion-dollar market-cap goal. We're looking at a market-beater for the ages here, and the next 10 years should continue telling the same story to an enthralled consumer market.

I'm also not worried about rival streaming services stealing Netflix's lunch. This sector has room for a plethora of big winners, and I fully expect Netflix to stay in or near the pole position for years to come.

Semiconductor growth should lift this stock to $1 trillion

However, Taiwan Semi should be able to do both in the years ahead. After all, the company has raised its dividend per share at a 13.7% annualized rate over the past three years and should raise that payout every year going forward. 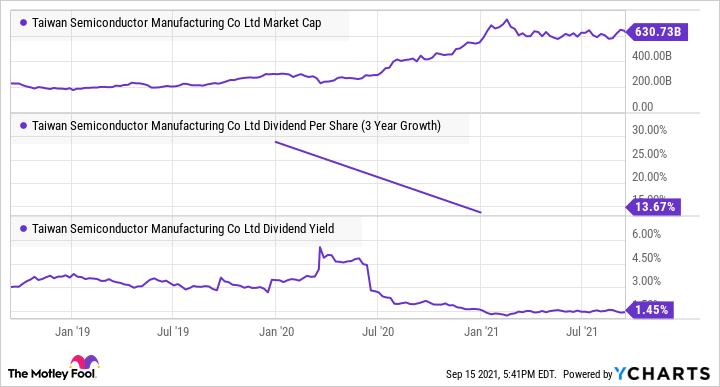 That's because Taiwan Semi, the world's largest and most advanced foundry, has a multiyear lead in leading-edge node chip production, which has catapulted the company to gaining a 57% market share in the foundry business.

As a pure-play foundry, Taiwan Semi doesn't make its own chips, but rather manufactures chips for the largest and most advanced semiconductor companies in the world, such as Apple, so the company should grow in-line with the semiconductor industry, in general. Of course, Taiwan Semi's gains or losses in market share could either make it exceed or lag that growth figure. However, given its current process lead for the next couple of years (at least), I'd expect its market share to grow, at least in the near term.

While projections vary, most research houses show the overall semiconductor market doubling within the next seven to eight years, thanks to the rise of the Internet of Things, cloud computing, 5G, and basic "smarter," "connected" everything. Fortune Business Insights projects the semiconductor market growing from $426 billion in 2020 to $803 billion by 2028, good for an annualized growth rate of 8.6%. Some semiconductor manufacturers even project $1 trillion in industry revenue by 2030.

A doubling or more of industry revenue with just stable market share would enable Taiwan Semi to hit $1 trillion this decade, even if its 31 price-to-earnings ratio compresses at bit. It remains one of the more attractive dividend growth stocks in the tech space.