The company needs to do three things for its stock to soar another 100%.

If you had bought shares of Moderna (MRNA 3.15%) when it first went public and held those shares, you'd now be sitting on a gain of nearly 2,200%. The stock has more than quadrupled so far this year.

This jaw-dropping performance has given Moderna a market cap of more than $170 billion. Some think that the biotech doesn't deserve such a rich valuation. One analyst even predicts that Moderna's share price could plunge around 70%.

But could Moderna instead keep rising significantly higher? It's possible. Here's how Moderna stock could potentially double from here. 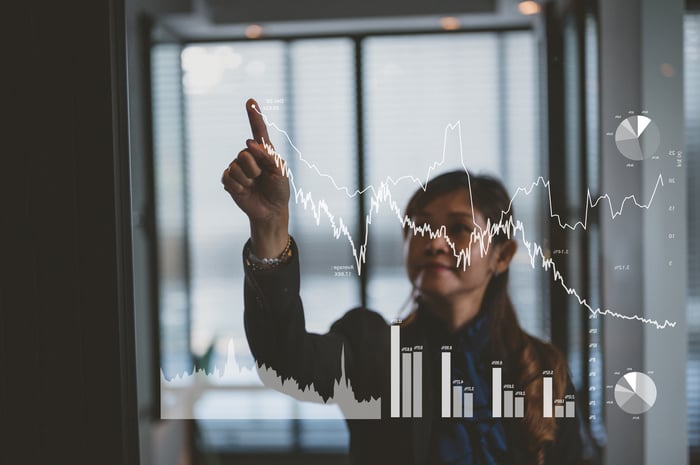 Most importantly, Moderna's COVID-19 vaccine sales can't decline; they must increase for the vaccine stock to have any shot (no pun intended) at doubling. There are a couple of key factors that could make this scenario a reality.

Ongoing frequent boosters are a must-have prerequisite for Moderna's COVID-19 vaccine sales to keep climbing. The emergence of new coronavirus variants that render current vaccines significantly less effective could all but ensure that governments will authorize boosters.

It would also help Moderna's prospects if other vaccines prove to be less effective at protecting against new variants than its own vaccines. That might not be a big problem, either. The Centers for Disease Control and Prevention (CDC) recently published data that found Moderna's vaccine was more effective than others with the rise of the delta variant in the U.S.

Moderna's lead candidate outside of its COVID-19 program is cytomegalovirus (CMV) vaccine mRNA-1647. The company plans to advance the experimental vaccine into phase 3 testing this year.

CMV ranks as the leading infectious cause of birth defects in the U.S. However, there currently aren't any approved CMV vaccines.

Moderna thinks that mRNA-1647 could generate peak sales of between $2 billion and $5 billion if approved. The better the vaccine does in phase 3 testing, the better the likelihood is that the vaccine could rake in sales closer to the upper end of Moderna's expected range.

3. Other pipeline candidates blow away expectations

The biotech will also need additional help from its pipeline. Its mRNA-4157 program could especially provide a major catalyst. mRNA-4157 is a personalized cancer vaccine that's being evaluated in a phase 2 study in combination with Merck's Keytruda. Merck and Moderna have a deal in place to split any global profits on the vaccine 50-50.

Influenza stands as one of the biggest vaccine markets outside of COVID-19. Moderna has high hopes for its messenger RNA (mRNA) flu vaccine that recently advanced into clinical testing. The company is also developing a COVID-flu combo vaccine.

Another big opportunity lies with Moderna's respiratory syncytial virus (RSV) vaccine candidate mRNA-1345. The company has already reported encouraging phase 1 results for the experimental mRNA vaccine. Although Moderna is behind several other vaccine makers in the RSV race, it could still achieve success in the market -- especially if its vaccine offers significantly higher efficacy than rivals.

Using an average biotech price-to-sales multiple of eight, Moderna would need to generate annual sales of around $42.5 billion to double its current market cap. Could the three aforementioned goals be enough to make that happen? Maybe.

Moderna expects that its COVID-19 vaccine will rake in $20 billion this year. Let's assume that new variants combined with price increases allow the company to increase that amount to $25 billion annually.

If mRNA-1647 delivers as hoped in immunizing against CMV, Moderna could be looking at another $5 billion per year. That gets the company to $30 billion in total projected annual sales.

Moderna's pipeline prospects are more challenging to quantify. A successful personalized cancer vaccine could realistically generate blockbuster sales for the company. The global flu vaccine market currently tops $5 billion and could more than double by the end of the decade, according to Allied Market Research. Moderna arguably could capture 50% of this market if its flu vaccine significantly outperforms all rivals in efficacy.

Successes for both pipeline candidates could put the company on track for at least an additional $6 billion in annual sales by 2030, bringing its total yearly revenue to around $36 billion. That leaves the rest of Moderna's pipeline needing to create another $6.5 billion or so annual revenue. Note also that we haven't addressed the potential for Moderna to use its growing cash stockpile to make acquisitions that fuel sales growth.

Even though Moderna sports a frothy valuation right now, there is a path for the stock to double going forward. However, there are two issues that investors need to keep in mind.

First, everything has to go right for the company. Murphy's Law can't rear its ugly head at all. The odds definitely seem to be against Moderna on this front.

Second, it could take years for Moderna's pipeline programs to generate the sales figures used in the previous calculations even if everything does go right. Granted, investors will look ahead in trying to value the company. Moderna doesn't necessarily have to be making the full sales amount for its stock to double as long as the market thinks it's on track to do so. Still, we could be looking at a relatively long period before the stock against doubles.

Given some luck and enough time, Moderna really could tack on another 100% gain. The main reason not to buy shares of the biotech right now, though, is that there are plenty of other stocks -- including other biotech stocks -- that could provide even better chances of doubling in a shorter period.