Shares of solar stocks are down across the board as fear of a big Chinese default has spread around the world.

The stock market has dropped like a rock on Monday as investors sell off nearly every part of the market. The worst of the sell-off is in growth stocks, which are generally very highly valued relative to other stocks, based on price-to-sales or price-to-earnings multiples. But the crash has also hit solar energy stocks, which are down across the board with some stocks off more than 10%. 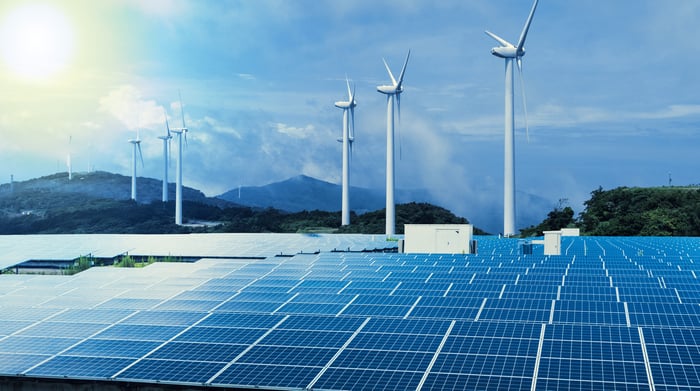 The first thing to note is that the market overall is down to start the week in large part because there's fear of some financial fallout coming from China. Real estate developer China Evergrande Group is expected to miss some interest payments this week, potentially putting the company's $300 billion of debt into question. The fear is that this will lead to a domino effect in financial markets that could include debt markets freezing up, asset prices dropping, and interest rates for risk debt jumping sharply. To be clear, none of this is happening yet, but given the sheer size of Evergrande, this has gotten a lot of attention.

On the solar energy side, there are two potential impacts. One is that if there's some sort of economic slowdown or financing freeze driven by a financial crisis or businesses in general not investing, we could see weaker demand for solar energy products.

The second impact could be on interest rates, which are critical for solar energy project developers. Most solar projects are financed with low-cost debt, which makes the electricity coming from a project low-cost and therefore highly competitive with fossil fuels. Higher interest rates could undermine that economic argument.

When financial markets run into a rough patch, solar energy stocks often sell off because investors see falling demand in the future or higher rates, but long-term we have seen that the industry continues to grow and be economical against fossil fuels. And with countries around the world expecting to keep interest rates low to boost recovery from the pandemic, I don't see why the economics of solar projects would come into question.

The volatility we are seeing today is really par for the course for investors in solar stocks. Even though I don't see any reason to think today's news items will impact demand or the economics of solar installations, the market is plummeting anyway.

If shares continue to fall, I see this as a buying opportunity for solar energy stocks. The industry is on better financial footing than it has been for most of the past decade and each of the companies I've mentioned is well positioned to benefit from industry growth. But volatility might be the reality for shareholders over the next few months, depending on how the financial risks facing China and its counterparts shake out.