The burrito roller is introducing beef brisket as a protein choice this week.

Fans of Chipotle Mexican Grill (CMG 2.25%) now have a new protein to throw into their bowls, tacos, salads, quesadillas, and burritos. The fast-casual chain is rolling out smoked brisket this week.

The 24 million members of Chipotle's free rewards program have had exclusive access to the new beefy protein since Monday. Everyone else will have access on Wednesday. Third-party delivery apps will add smoked brisket to their digital menus next week.

If brisket is up your alley you may not want to wait too long before heading out to your nearest Chipotle to check it out. It's a limited-time offering that will likely be gone in a few weeks or months. You might like the new menu addition. Chipotle and its shareholders might like it even more. 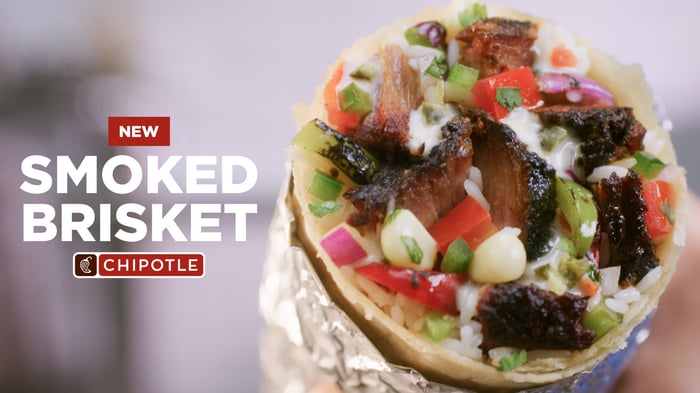 Chipotle doesn't have to introduce something new right now to turn heads. It's on fire. Revenue soared 38.7% in its latest quarter, fueled by expansion but mostly on the back of a 31.2% year-over-year surge in comps. It's not a fair comparison, of course. Folks weren't eating a lot of takeout in the springtime quarter of 2020.

However, even if we look back at the second quarter of 2019 to get a pre-pandemic baseline the current performance is still impressive. Chipotle's latest quarter finds revenue 32% higher than it was two years ago -- and comps up a beefy 25.1%.

Chipotle's rapid recovery was the handiwork of digital initiatives, a feel-good brand, efficiency improvements, and a CEO who isn't afraid to tweak the menu. The original Chipotle regime was critical in establishing the concept and its "food with integrity" mantra, but Chipotle's been operating at a different level since Brian Niccol came over from the helm of Taco Bell. Niccol hasn't hesitated to try out new proteins, bases, and toppings -- and it's paying off.

Chipotle has always tested out potential items. It opened a test kitchen in New York City before Niccol arrived. However, test items didn't typically make the cut before. Late last year I covered three menu additions that the chain was testing out. Chipotle-lime cauliflower rice, gourmet quesadillas, and now smoked brisket have all found their way to the assembly lines in 2021.

A "limited-time" offering doesn't mean that this will be the last we see of brisket once the clock runs out on this promotion. Carne asada also made it out to Chipotle as a limited-time protein in the summer of 2019. It returned last fall for another brief run.

They're not all going to be hits. Chorizo and the first iteration of queso at Chipotle didn't go over so well. The chain is still working on a viable dessert option. However, having a bench of "limited-time" proteins it can roll out like carne asada and possibly now brisket makes sense.

Chipotle has been a leader among restaurant stocks. Everything it does is going to attract attention. It's doing great right at the moment, and now it's adding a new option that will attract more repeat customers and even a few first-time users. You can never be doing so well that you can't aim to get better.