The stock market is climbing, and these companies are standing out.

A couple of stocks made some big moves higher, reflecting positive news that bodes well for both near-term prospects and long-term potential. Stitch Fix (SFIX -0.79%) had a favorable earnings report, while MGM Resorts International (MGM -0.51%) continued to benefit from second-order effects stemming from a possible merger in the gambling space.

Investors get their fix

Shares of Stitch Fix soared 14%. The subscription-based fashion home-delivery service revealed strong numbers in its fiscal fourth-quarter financial report, and investors think it could have even further to climb. 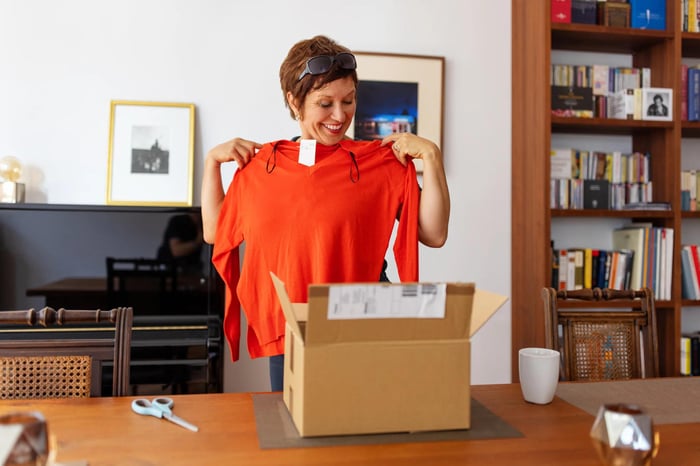 Stitch Fix reached some key milestones during the period. Quarterly revenue rose 29% year over year, helping the company surpass the $2 billion mark in sales for the first time in fiscal 2021. Active clients rose by 643,000 to 4.17 million, and revenue per active client inched higher by 4% year over year. Perhaps best of all, Stitch Fix returned to profitability in the quarter, reversing substantial year-earlier losses.

The outlook for Stitch Fix also appears positive. The company predicted revenue of $560 million to $575 million in the first quarter of fiscal 2022, which would represent 14% to 17% gains over prior-year levels. Stitch Fix called for 15% revenue growth for the full year, sustaining its upward trajectory.

Efforts like bolstering its core women's division, expanding geographically, and using its Freestyle direct-buy channel more effectively are paying off for Stitch Fix. That's good news that's long overdue for many shareholders, but the company might finally be building the momentum that so many have patiently waited to see from the fashion provider.

Elsewhere, shares of MGM Resorts International climbed almost 6%. The casino resort company continued to rise as one of its partners got a richer acquisition bid.

MGM is a 50-50 partner with London-based Entain (ENT -0.39%) in the BetMGM online sportsbook venture. This week, news came out that DraftKings (DKNG -0.19%) had made a bid for Entain that would value the company at around $20 billion. Entain had rejected that initial bid, but DraftKings upped its bid to about $22.4 billion, and that apparently has gotten deeper consideration from the U.K. gambling giant.

However, the terms of the partnership between MGM and Entain require MGM to give its consent for any deal that would involve Entain having an interest in a competing U.S. business like DraftKings. MGM had sought to buy out Entain earlier this year with a much lower bid, but Entain turned down the offer.

BetMGM is only part of the MGM casino resort empire, but the online sportsbook represents an important effort to bolster the company's overall growth and fend off rising competition from disruptive players in the gambling industry. Investors are excited to see the market starting to give full value to online sports betting, and it'll be interesting to see whether MGM can squeeze some added benefits from DraftKings in exchange for its consent to an Entain acquisition.

Stitch Fix Sinks, but This Little-Known Stock Is on the Rise Wednesday