Shares of Pinterest are down 20% year to date with a 29% drop in just the last three months.

Pinterest (PINS -0.18%) is having a challenging year in 2021. The company benefited at the pandemic's onset when millions of people largely stayed home for weeks or months on end. With few options for what they could do with their time, many people flocked to the image-based social media app for inspiration and lifestyle ideas.

That trend is reversing this year. Billions of people have gotten at least one dose of a vaccine against COVID-19, and economies are reopening. Spending time outside and away from their various screens, engagement on the social media platform is falling. As a result, Pinterest stock is down 20% year to date and 29% in the last three months. 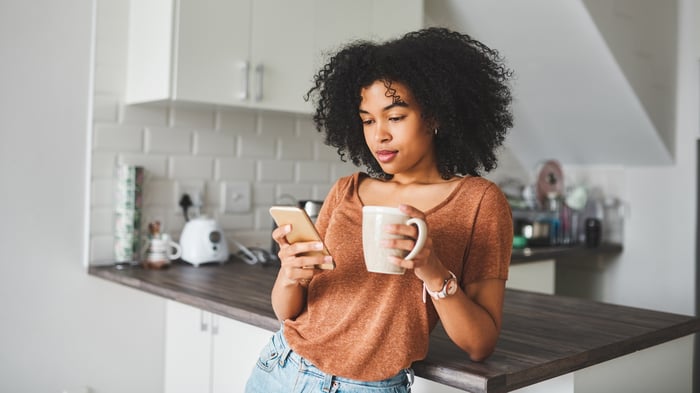 Fortunately for Pinterest, one of the side effects of reopening economies is ramped up spending among marketers. Facebook and Alphabet account for over 50% of the digital-advertising market, according to data from eMarketer. Each company also reports on various metrics for the industry, and in their most recent reports, the clear takeaway was rapidly rising digital ad prices.

Pinterest boasts 454 million monthly active users, down from 478 million in the previous quarter. Four in five of the company's users are now from international markets.

However, advertisers are still keen on winning the attention of U.S. users, who are worth a lot more than their non-U.S. counterparts to Pinterest. The company generates average revenue per user (ARPU) of $5.08 in the U.S. versus just $0.36 internationally. The company is still in the early stages of monetizing its international user base, only launching those efforts in Brazil and Mexico a few months ago, for example. The large gap between international and domestic ARPU should shrink over time as Pinterest builds out its various efforts overseas.

Next, Pinterest is sustaining its creator code initiative, which helps ensure its site remains a positive and supportive environment. Finally, it's working on a feature that goes beyond likes and comments to foster community among its members and creators.

According to management, Idea Pins is taking off already with the number of Idea Pins expanding sevenfold in 2021. The features all work toward attracting people to the site and then getting them to participate in the community. Users are likely to spend more time on Pinterest if they're communicating with others on the platform. New tools and features keep consumers engaged and help support community-building efforts.

Overall, near-term results could be volatile for Pinterest as consumers adjust their behavior based on the state of the pandemic. The most obvious risk is that Pinterest continues to shed users over the next few quarters. Investors who have the stomach to handle the short-term volatility should consider adding this beaten-down growth stock to their watch lists.