Is a revolution coming that will disrupt our commonly known mediums of exchange?

On Sept. 7, El Salvador became the first country in the world to accept Bitcoin (BTC -0.76%) as legal tender. Even though the rollout has been far from ideal, major food outlets in the country, such as Starbucks, Pizza Hut, and McDonald's, have all began accepting the digital currency as payment.

Bitcoin is up nearly 60% since the beginning of the year, and the latest move should appease skeptics who claim it cannot be used in everyday transactions because it's too volatile. So, could Bitcoin or other cryptocurrencies, one day, replace fiat money? 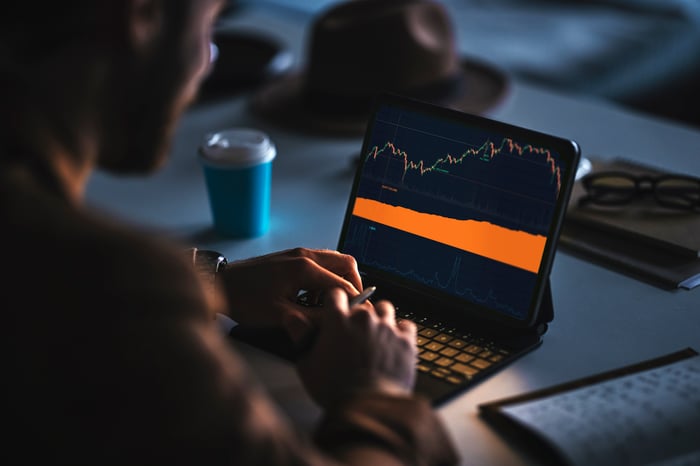 There are reasons why countries worldwide moved off the silver and gold standards, and adopted fiat currencies. For example, if the U.S. dollar was backed by gold, it would've been impossible for the Department of Treasury and the IRS to issue stimulus money in trillions of dollars over a period of few months without first mining abundant amounts of the commodity. And that would've led to a chronic depression instead of a quick recovery.

Fiat currencies, on the other hand, could be issued by governments for varying amounts and lengths of time leading to varying levels of inflation. This, of course, is mostly negative on the economy, but not entirely.

Countries going to war, for example, can repeatedly print money for their military budgets thus wiping out their citizens' savings but ultimately securing enough funding to save the motherland. Unfortunately, fiscal mismanagement can also lead governments to print excessive amounts of money to pay off debt. Venezuela and Zimbabwe are examples of such fiscal misadventures. Eventually, such governments are prevented from raising taxes from fear of an economic collapse, bring about revolutions or civil war.

What's more, even during peaceful times, inflation targets, which nearly all governments have, will cause a chronic loss of savings in the long term, especially when interest rates are near rock-bottom levels. The loss of the purchasing power of the U.S. dollar only accelerated after President Nixon took it off the gold standard in 1971, with a cumulative loss of 84.4% from then to 2020.

Due to their scarcity, silver and gold-backed paper currencies have minimal inflation levels and, by definition, prevent hyperinflation. But a little-known fact is that market forces can actually sway them to hyperdeflation, sometimes in ridiculous ways.

Take the following case study. In 1934, President Franklin D. Roosevelt signed the Silver Purchase Act to revitalize the silver industry in the aftermath of the Great Depression, calling for the continued purchase of silver until its supplies hit one-third of the Treasury's gold reserves. The price of silver quickly doubled from around $0.24 per ounce to $0.58 per ounce within a year. It was a purely domestic policy but it had the unintended consequence of devastating the economy of the then Republic of China, which used a silver standard.

Of all places, Uncle Sam's insatiable appetite for silver whipped up a frenzy in Shanghai. Bankers melted down silver-based Chinese yuan coins en mass and shipped silver bars abroad to America for purchase. It was far more profitable to smuggle the yuan to the U.S. Treasury than to lend it out to businesses and entrepreneurs for interest. Meanwhile, the silver-backed yuan appreciated sharply against the U.S. dollar, severely diminishing the competitiveness of Chinese exports.

In the end, the price of goods within China fell sharply, but not as fast as how GDP plunged -- leading to a seemingly impossible combination of stag-deflation. The Chinese government threw in the towel after repeatedly begging President Roosevelt to stop to no avail, and moved to a fiat system the next year, which would also collapse a decade later due to hyperinflation.

So, in the end, both types of currency systems have significant drawbacks.

The rise of digital money

Bitcoins and other cryptos with hard limits in supply are quickly becoming a prototype that could potentially combine the best of both worlds. This is particularly true for Bitcoin, which has a limited supply of 21 million -- with an estimated 34% already lost forever due to people losing their private keys. This scarcity, combined with a record flow of money into peer-to-peer cash payment systems, has led its price increase to far outpace that of inflationary pressure on fiat currencies. In addition, the beauty of cryptocurrencies is that their protocols are live and are subject to change. In a move similar to Keynesian economics, governments or market participants could temporarily modify crypto protocols to allow the issuance of new coins for stimulus, and then repurchase them when the economy has recovered. I

What's more, the lack of need for physical storage and ease of transport across international borders has caused Bitcoin to have far more investment value than gold and silver. As a result, individuals can use the coin as a solid means to an end for their financial goals, such as saving for retirement or establishing an emergency fund. To an extent, this "growth is king" approach has made individuals less reliant on the need for fiat social spending.

Innovations in the sector are also rapidly improving the technology. For example, Luna (LUNC 11.07%) and Reserve Rights (RSR) are two dual-token platforms where consumers make purchases using their stablecoins (Terra USD and RSV). At the same time, investors absorb the volatility through owning LUNA and RSR tokens. Through buy and sell swapping the investment tokens for TUSD or RSR, investors can maintain their exchange rate to the U.S. dollar while earning "commissions" for their efforts.

Lastly, while exciting, it's important to note that central bank digital currencies (CBDCs) are really just a digitized version of fiat. Even if there was one day a digital U.S. dollar, it would still hold true to its inflationary nature as the Federal Reserve that controls it could issue infinite amounts.

Hence, the main flaw of Bitcoin and decentralized digital money is its linking of geographical risks as a true global currency. In the same way that the U.S. delivered the finishing blow to the Republic of China's silver standard in 1934 with its domestic Silver Purchase Act, U.S. Bitcoin users and those in other parts of the world have all too often been hit hard by regulatory crackdowns in China and South Korea unrelated to their everyday transactions with the coin. And there are many other examples where this has gone wrong. But overall, the cryptocurrency cyberspace is rapidly evolving, and while government adoption is possible, it's safe to say that it'd take at least a decade to gain traction. But now's nevertheless the golden age of investing in this promising sector.

Why Fantom Powered Ahead Today

Why Bitcoin, Ethereum, and Dogecoin Are Rising Today
370%