There's been considerable volatility on Wall Street in recent trading sessions, so market participants might well appreciate a quiet Friday morning to end the week on a calmer note. A big spike higher in interest rates has many investors watching the Federal Reserve for signs of moving forward on its tapering of quantitative easing-inspired bond purchases. As of 11:45 a.m. EDT, the Dow Jones Industrial Average (DJINDICES:^DJI) was down 42 points to 34,723. The S&P 500 (SNPINDEX:^GSPC) gave back 7 points to 4,442, and the Nasdaq Composite (NASDAQINDEX:^IXIC) fell 71 points to 14,981.

On a relatively calm day, some lesser-followed stocks were able to come to the forefront with interesting news. Meredith (NYSE:MDP) and Vail Resorts (NYSE:MTN) were among the top gainers on the New York Stock Exchange. Below, we'll look more closely at what moved those companies and what could lie ahead for shareholders.

A buyout for Meredith?

Shares of Meredith soared more than 25% on Friday morning. The magazine publishing company was the subject of analyst speculation that it could receive a buyout bid from a key conglomerate in the digital media space. 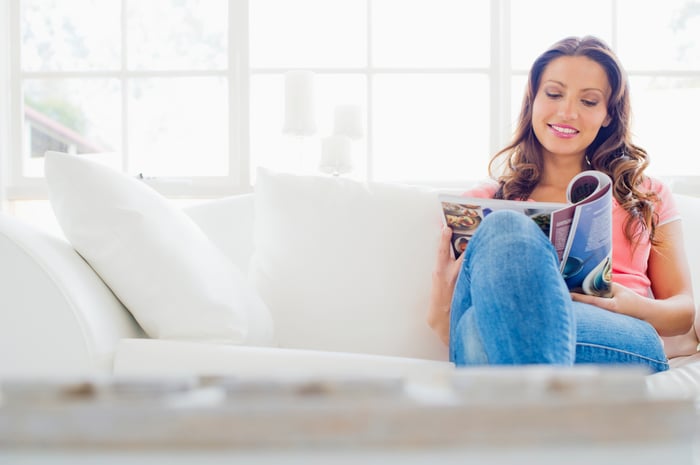 Late Thursday, The Wall Street Journal broke news that Meredith is in advanced talks with IAC/InterActive (NASDAQ:IAC). Terms of a deal aren't certain, but the report suggested a potential value for the publisher of People, Food & Wine, and Better Homes & Gardens of more than $2.5 billion. The jump in the stock price fully reflects that valuation, with Meredith now boasting a market capitalization closer to $2.6 billion.

Meredith's stock has soared over the past couple of years. The company's efforts to reduce debt have worked well even in a challenging advertising market. Despite the headwinds that the magazine industry has faced, Meredith's well-known publications have given it some flexibility that less-prominent competitors have had difficulty duplicating.

IAC has long been a giant in digital media, and taking on Meredith's brands and adapting them fully for online consumption could be a huge jump forward for IAC. The fact that IAC's shares are up 6% today suggests that its shareholders don't think it would be paying too much for Meredith at the proposed prices.

Summer is the off-season for Vail, so it wasn't surprising to see the company concentrate on its full-year results. Vail's numbers still reflected some difficulties from the pandemic, as total net revenue fell nearly 3% to $1.91 billion, with falling ski school revenue offsetting rising lift revenue. However, the ski operator's bottom line improved, with net income climbing nearly 30% year over year.

Moreover, pass sales for the coming 2021-2022 ski season look promising. The company has sold 42% more passes, raising 17% more in total dollar value through mid-September as it had this time last year. Accordingly, it said it expects adjusted pre-tax operating earnings from its resort segment to come in between $785 million and $835 million for fiscal 2022.

The company boosted its capital spending estimates for 2022 to $320 million, which is nearly double its typical capital plan. Also, a new mobility partnership with Toyota Motor (NYSE:TM) will give outdoor adventurers more opportunities to take advantage of Vail's resort properties. All in all, Vail is positioned to bounce back from the pandemic with even more vigor if things go well this ski season.