Augmented reality (AR) has arrived and is making its entrance in a big way. The technology has facilitated incredible demonstrations of bringing video game elements to a live scene.

NFL spectators watching the Carolina Panthers face off against the New York Jets on Sept. 12 enjoyed a full AR display when a monstrous (holographic) panther prowled the stadium and perched upon the scoreboard. The event singlehandedly showed the powerful future of AR and may have had investors wondering about the company, or companies, behind the spectacle. One of them is Tencent Holdings (TCEHY 3.69%), which looks like a bargain opportunity for investors. 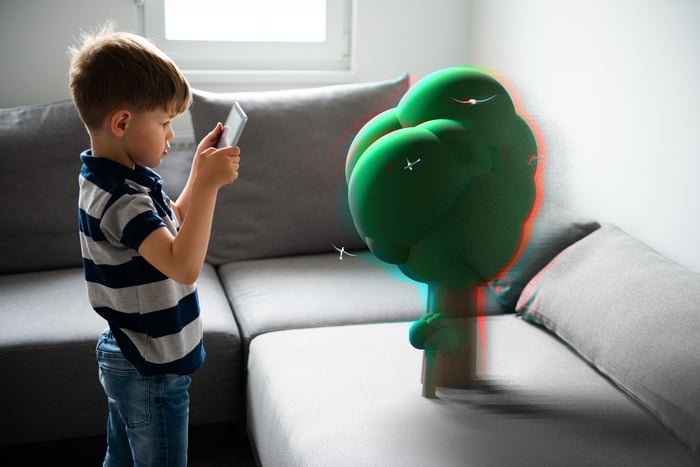 Advertising agency The Famous Group (TFG) was responsible for the virtual panther event. TFG's platform and Epic Games' UnrealEngine software were used to overlay a computer-generated object upon the real, and live, environment. This stands in contrast to the somewhat more familiar, virtual reality, in which the environment is digital and contained.

With more than 10 million online views, the popularity of the AR event has garnered attention to TFG and has attracted nearly $60,000 in revenue for the team and sponsors. Epic Games receives a 5% fee on revenue generated by game developers and firms using UnrealEngine, for amounts above $1 million (anything up to $1 million is royalty-free). Looking at the four main professional sports leagues in the U.S. -- NFL, MLB, NHL, NBA -- there are 124 teams that could put on a similar show. That is the tip of the revenue iceberg that includes company conferences, concerts, and other mass-audience events globally.

This brings us to Tencent, which took a 40% minority stake in Epic Games in 2013 for the price of $300 million. Tencent is a leading technology company headquartered in China, best known for products and services focused on the internet, social media, gaming entertainment, cloud computing, and mobile payment.

Tencent had full-year revenue of nearly $75 billion in 2020, a 28% growth rate over 2019, as investors helped build up the stock price from $49 in January 2020 to a high of $99 at the start of this year. What Epic Games does has an impact on Tencent's financials and the Panthers event shows potential for more revenue to come.

But not all has been rosy for Tencent recently, as government regulations in China have introduced new rules and restrictions related to antitrust, data regulation, and online gaming. Sweeping efforts to control how the internet is used, including time restrictions for gaming among children, have led companies such as Tencent to lose millions of dollars in value. Tencent's stock fell from $99 in January to $58 today, nearly erasing all its 2020 gains.

Meanwhile, during its second-quarter earnings call on Aug. 18, the company reported profits increased 29% (year over year) to $6 billion, beating analysts' estimates by nearly 25% and revenue climbed 20% to $21 billion. The result was a quick jolt to the stock price from $53 to $67 before it staggered back down.

Tencent's management, led by President Martin Lau, is taking action to stay compliant with new regulations. The company suspended new user registrations for social media platform WeChat for a week in July to ensure all regulatory requirements were satisfied prior to registering new users. Lau's public acknowledgment and agreement with Chinese regulators about the need for more Internet regulations didn't help investors, as evidenced by the resulting stock price decline. However, his comments should put the company in a better light with regulators and ultimately benefit Tencent long term.

Tencent has been largely spared by the State Administration for Market Regulation, receiving only a handful of penalties. The potential fines of up to $1.5 billion for antitrust penalties centered on Tencent Music Entertainment Group but have only resulted in a small fine of $75,000, along with Tencent Music giving up exclusive music rights. Giving up those rights could hurt future revenue, which investors will have more insight into when third-quarter financials are reported in November.

Pouncing on a low-cost opportunity

According to a report from Grand View Research, the AR market is valued at $26 billion, with a projected compound growth rate of 43%, which would result in an estimated value of $340 billion by 2028. Interestingly, the key companies profiled do not include Tencent.

But with a $50 million investment made in Ultraleap, which provides sensors and software for gesture recognition and touch-free haptic feedback, the company is strengthening its position in the AR space. Combined with its previous investment in Epic Games and the purchase of Riot Games, Tencent should be getting a piece of the AR pie for years to come.

John Slusser, owner of The Famous Group, believes this is merely a glimpse of what can be done with AR technology. With more innovation, the panther may even learn some new tricks.

Despite regulatory fears, analysts still have an average 12-month price target of $81 on Tencent stock. That represents a potential 40% gain above the current stock price. The stock may be volatile as regulations shake out and there's a chance more penalties could be handed down. But the company continues to crank out revenue at a strong pace and has been improving its profits along the way -- both of which should power the stock price higher.

Any potential fines pose a near-term risk for investors, but for those who can stomach some volatility in exchange for an inexpensive stock, this could be an AR play that boosts your portfolio over the next decade and beyond.