Let's take a deeper look at this agreement, and the potential revenue it could generate for AbbVie. 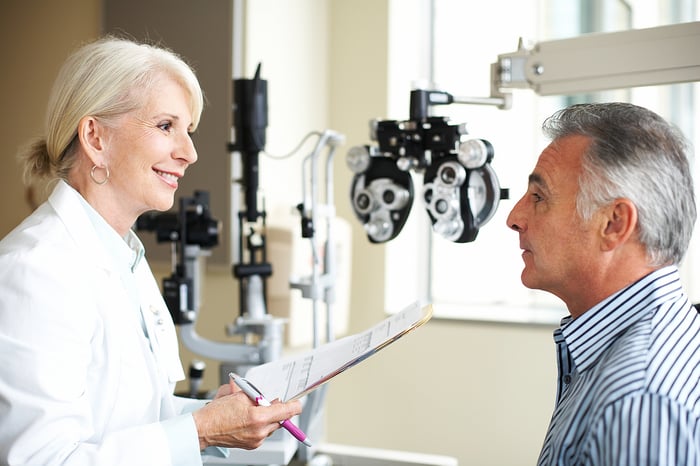 RGX-314 is a potential one-time treatment for wet age-related macular degeneration (AMD), a chronic eye disorder that includes symptoms such as blurred vision and a blind spot in a patient's visual field, and diabetic retinopathy, a complication caused by diabetes that damages blood vessels in the retina, even leading to blindness.

For the uninitiated, gene therapy is a relatively new technique to treat disorders by genetically modifying cells in the patient, instead of administering drugs or undergoing surgery.

In the agreement AbbVie will pay $370 million up front to Regenxbio, while the latter could also receive up to $1.38 billion from AbbVie based on developmental and commercial milestones. AbbVie will use its expertise and vast resources to help commercialize RGX-314 around the world, while Regenxbio will participate in U.S. commercialization efforts alongside AbbVie.

While both companies will share equally in the profits generated within the U.S., AbbVie will pay tiered royalties to Regenxbio for international sales.

According to the BrightFocus Foundation, approximately 11 million people in the U.S. have some form of AMD, and that figure is expected to double to 22 million by 2050. More importantly, wet AMD, as opposed to dry AMD, is aggressive and accounts for 90% of AMD-linked legal blindness (despite only being 10% of AMD cases), which means early detection and treatment is critically important.

Diabetic retinopathy, on the other hand, is the leading cause of blindness in adults with diabetes and the top cause of blindness for all adults in the U.S. Similar to AMD, the symptoms can include loss of central vision, as well as black spots in the vision. The longer someone has diabetes and the less it is controlled as measured by blood glucose, the greater the risk for complications.

With the prevalence of diabetes increasing in the U.S., the National Eye Institute (NEI) estimates that the number of diabetic retinopathy cases will nearly double from 7.7 million in 2010 to 14.6 million by 2050.

While the therapy appears to be effective in phase 2 clinical trials, what makes RGX-314 a potentially significant breakthrough is that it's a one-time treatment. That's a massive advantage over the current standard of care where eye injection treatments, such as Regeneron's (NASDAQ:REGN) Eylea, must be administered every four to eight weeks.

If these results are reproduced in eventual phase 3 clinical trials, this would represent a huge improvement in quality of life for wet AMD and diabetic retinopathy patients without sacrificing efficacy.

But what could that mean for pharma stock AbbVie if RGX-314 is ultimately approved by regulatory agencies around the world?

The market research company IndustryArc estimates that the wet AMD market will grow 8.1% annually from 2020 to reach $8.7 billion in sales by 2025 due to an aging global demographic.

With several effective blockbuster therapies like Eylea on the market, it would be unrealistic to expect RGX-314 to be the top-selling therapy for the two retinal conditions. But for patients who are having a difficult time complying with the regular injections required by standard of care treatment options like Eylea or who want more convenient treatment options, I believe that RGX-314 can carve out a conservative 8% market share by 2030.

Assuming that the wet AMD and diabetic retinopathy markets continue their current growth rates, this would work out to $2.1 billion in annual sales for AbbVie by 2030 (shared with Regenxbio, of course).

Even with the tiered royalties payable to Regenxbio outside the U.S. and profit sharing in the U.S., AbbVie's partnership with Regenxbio on RGX-314 could generate over $1 billion in annual revenue by 2030.

For a company that analysts expect will generate $56.3 billion in revenue this year, $1 billion-plus in additional annual sales is enough to move the needle for AbbVie.

Although AbbVie's partnership with Regenxbio is encouraging, the biopharmaceutical is so much more than this potentially huge deal.

AbbVie has an innovative line of drugs in its arsenal and in development that should help command strong pricing power in an otherwise competitive industry, and to take the reins from its top-selling drug in the world, Humira, whose exclusive patent expires in 2023.

From a valuation standpoint, AbbVie stock currently trades at less than eight times this year's earnings forecast. That's why I believe AbbVie is a buy for value investors. The market-beating 4.8% dividend yield also appears to be rather safe since the payout ratio will be in the low-40% range this year. In short, the company has substantial cash flows to reinvest in itself and develop more path-breaking drugs.