U.S. House of Representatives Speaker Nancy Pelosi has set Thursday as the date for a House vote on the $1 trillion bipartisan infrastructure bill. She has expressed confidence in it passing, and three alternative energy stocks are soaring today as a result. As of 2 p.m. EDT, XL Fleet (NYSE:XL), Hyliion Holdings (NYSE:HYLN), and Clean Energy Fuels (NASDAQ:CLNE) were moving as follows:

The proposed infrastructure bill has several areas geared toward advancing and accelerating growth in the electric vehicle sector as well as other alternative energy solutions. That support could boost growth plans for companies like XL Fleet, Hyliion, and Clean Energy Fuels. 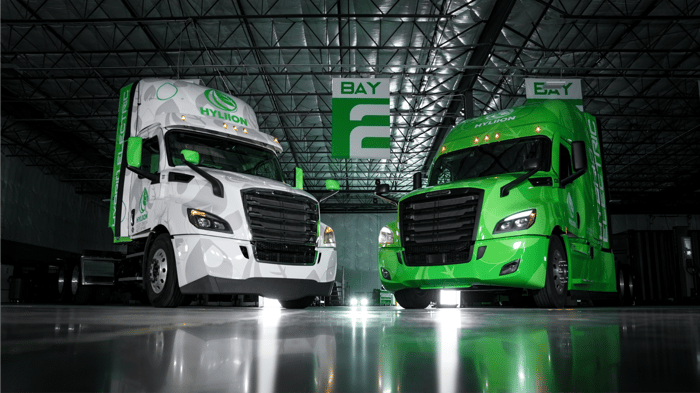 XL focuses on the electrification for Class 2-6 commercial fleet vehicles, which range in size from utility vehicles to medium-duty commercial trucks. Hyliion covers the larger size commercial truck fleets by providing electrified powertrains for Class 8 semi trucks. Clean Energy Fuels is working to boost the use of renewable natural gas as a transportation fuel. All three stand to gain from passage of the proposed infrastructure bill.

The bill as proposed has several areas that would benefit each of these companies. There is $39 billion dedicated to modernizing public transit. This includes replacing thousands of rail and bus fleet vehicles with zero-emission models, according to a CNN report. Separately, there is $7.5 billion allocated for zero- and low-emission buses, which aims in part to grow the use of electric school buses. Another $7.5 billion would go toward building a nationwide network of electric vehicle chargers.

Both XL Fleet and Hyliion need that charging infrastructure to help move customers to convert commercial fleets to plug-in hybrid or fully electric vehicles. XL Fleet, for example, has partnered with the owners of UBS Arena in New York City to investigate adding 1,000 charging stations to the arena where the NHL's New York Islanders play. The arena is strategically located relative to both of New York City's main airports, and the company seeks to utilize the property for truck fleet charging during off-peak hours as well as for customers parked there during events.

Hyliion expects to begin recognizing revenue before the end of 2021 for its hybrid truck electric powertrain solution. Clean Energy Fuels is taking a different approach to reduce carbon emissions from commercial trucks. It supplies RNG to modified engines that qualify as fully zero-carbon since the natural gas is made from organic waste from dairy farms, wastewater treatment plants, and landfills.

All of these business would get a shot in the arm with significant additional federal spending that would come from the pending infrastructure legislation. Of course, investors shouldn't just bet on a political outcome. Though these businesses all come with high risks, the move toward the electrification of transportation and the use of clean alternative energy seems to be a trend that will continue. Investors with a long enough time horizon, as well as risk tolerance, may be interested in these companies regardless of how the vote on the bill goes.