Many investors like to buy shares of large drugmakers for the relative stability that they provide. But tremendous growth often isn't expected from these stocks.

That doesn't mean, though, that strong growth is always out of the question for top biopharmaceutical companies. Here are three big pharma stocks that Wall Street thinks could soar by at least 30% within the next 12 months. 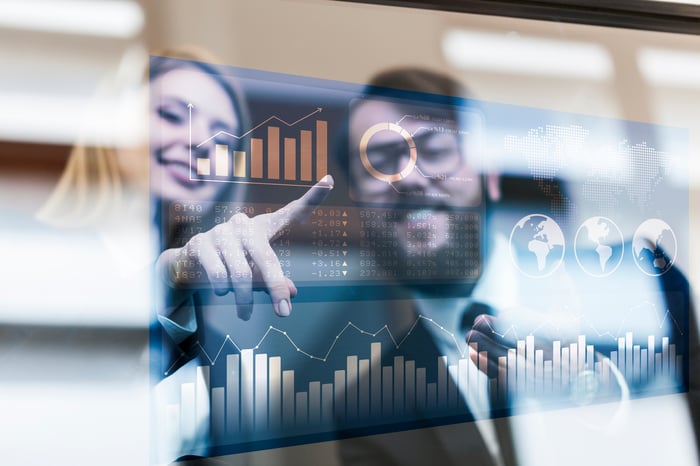 The consensus Wall Street price target for Bristol Myers Squibb (NYSE:BMY) reflects a premium of nearly 34% to the current share price. Of the 22 analysts surveyed by Refinitiv, the most pessimistic of the group thinks that the pharma stock could jump at least 10% higher.

This bullishness might be somewhat surprising. BMS' top-selling product, Revlimid, faces generic competition beginning next year. The blood cancer drug generated 27% of the company's total revenue in the second quarter.

So why do analysts like BMS so much? For one thing, that generic competition will only be in limited volumes at first thanks to contractual agreements. The company also has several other blockbusters with strong sales growth, notably including blood thinner Eliquis and cancer immunotherapies Opdivo and Yervoy.

BMS' lineup is loaded with newer drugs with tremendous potential as well. Cancer cell therapies Abecma and Breyanzi along with multiple sclerosis and ulcerative colitis drug Zeposia especially stand out. Over the next few years, these and other drugs could help make up for anticipated sales declines for Revlimid.

Analysts look for an even better performance over the next 12 months from Sanofi (NASDAQ:SNY). The average price target for the French drugmaker is 35% above the current share price. The lowest target for Sanofi among the three analysts surveyed by Refinitiv expects the pharma stock to soar by at least 20%.

Regeneron isn't helping Sanofi on every front, though. The big drugmaker has several products of its own with strong sales growth, including rare blood disorder drug Cablivi, type 2 diabetes drug Soliqua, and its vaccines franchise.

Investors also get an added bonus with Sanofi -- its dividend. The company's dividend yield currently tops 4%, which makes Sanofi one of the most attractive pharma stocks for income-seeking investors.

Wall Street is especially enthusiastic about the prospects for Vertex Pharmaceuticals (NASDAQ:VRTX). The consensus price target for the stock is nearly 41% above the current share price. Twenty-two of the 27 analysts surveyed by Refinitiv view Vertex as a buy or strong buy with the other two analysts recommending holding the stock.

The primary reason behind this bullishness is Vertex's cystic fibrosis (CF) franchise. There are only four approved CF drugs in the U.S. and Europe that treat the underlying cause of the genetic disease. Vertex markets all of them. The company's CF drugs should be able to generate even higher sales as Vertex picks up additional reimbursement deals and regulatory approvals.

Vertex could have a non-CF drug on the market in the not-too-distant future. The company is partnering with CRISPR Therapeutics to develop gene-editing therapy CTX001 in treating rare blood disorders beta-thalassemia and sickle cell disease. Vertex and CRISPR Therapeutics hope to be able to file for regulatory approvals as soon as 2023.

Other pipeline candidates could also provide catalysts for the stock. Vertex expects to report results from a phase 2 study evaluating VX-147 in treating APOL1-mediated focal segmental glomerulosclerosis (FSGS) later this year. Data from a phase 2 study of VX-548 in treating acute pain following bunionectomy surgery should be announced in early 2022.