Please ensure Javascript is enabled for purposes of website accessibility
Free Article Join Over 1 Million Premium Members And Get More In-Depth Stock Guidance and Research
By Daniel Sparks - Sep 28, 2021 at 7:05AM

Even one analyst's lowered price target for the growth stock still represents a bullish view.

Shares of Amazon ( AMZN -0.18% ) fell a few percentage points on Monday morning, following an analyst's move to cut his price target for the stock. Interestingly, however, the analyst's lowered price target for shares still represents significant upside from where the stock is trading today, illustrating how bullish some analysts are on the company. Indeed, even after this analyst lowered his price target, he is still maintaining an overweight rating on shares (the equivalent of a buy rating). Further, the last six analysts to rate the stock have given it buy ratings (or an equivalent of some sort).

Here's a look at how even a downgraded outlook for Amazon stock from one analyst is still a bullish one. 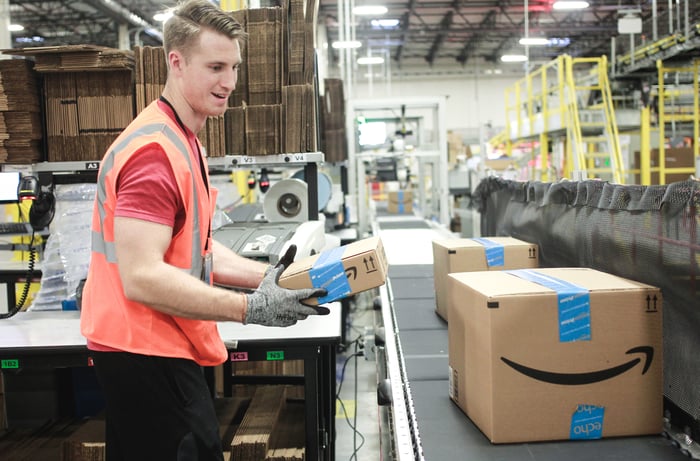 Morgan Stanley analyst Brian Nowak lowered its 12-month price target for Amazon stock from $4,300 to $4,100 on Monday. Though he reiterated an overweight rating for shares, which currently trade at about $3,350. The price target represents more than 20% upside.

The lowered view for shares reflects the analysts' concerns about growing warehouse and logistics headcount and the company's move to increase wages for these employees. Aggressive hiring efforts and increasing wages led Nowak to trim his forecast for 2021 and 2022 earnings before interest and taxes. Challenging near-term profitability headwinds could make prevent shares from rising until revenue growth reaccelerates in the second half of next year, the analyst says.

The long game is what counts

But investors should read in between the lines. The analyst also says in the note that the company's expanded logistics operations will ultimately help Amazon improve shipping speeds, gain market share, and create new business opportunities. In other words, this is a classic Amazon move: sacrifice profits today in the name of a more powerful business in the long term. By hiring aggressively and paying its workforce better, the company is ultimately strengthening its competitive position.

Analysts have good reason to be optimistic about Amazon's long-term prospects. The e-commerce giant's revenue has been growing rapidly and its operating margin has been steadily improving on a trailing-12-month basis.

Investors may do better to avoid worrying about any short-term predictions about Amazon shares and instead focus on the company's long-term prospects, which remain very promising. As the company benefits from operating leverage, the consensus analyst forecast currently calls for the e-commerce giant's earnings per share to explode over the next five years, rising 36% annually. This would easily justify the stock's current valuation.

Of course, investors shouldn't rely on analyst price targets to make their investment decisions. Instead, they should base decisions on their own due diligence. Nevertheless, it's telling that even an analyst downgrade for Amazon stock is still bullish.