The stock market is considering whether Workhorse is worth an investment anymore.

Following failure to win a huge USPS delivery vehicle contract, electric vehicle (EV) maker Workhorse Group (WKHS -5.61%) is seeing its share prices crash even lower. Investor confidence sank recently on the recall of several dozen Workhorse delivery vans for upgrades. While the company is undoubtedly having difficulties, several recent events hint at a turnaround chance within the next year or two and make Workhorse worth watching -- though perhaps not buying right now.

Why the stock market is negative

Among other troubles, Workhorse recently lost a multibillion-dollar contract to build electric delivery runabouts for the Postal Service to industrial vehicle maker Oshkosh Corporation (OSK 0.39%). Subsequently, it dropped its legal complaint against the government, after Oshkosh filed a motion asserting "Workhorse's failure to complete the administrative appeal process is fatal to its case."

Next, Workhorse announced recall of 41 of its C-1000 electric last-mile delivery vans on Sept. 22. The C-1000, an update on Workhorse's earlier C-650 design, is named for its 1,000 cubic feet of cargo space, while retaining the same 100-mile range. The company both recalled the C-1000s currently on the road and suspended upcoming deliveries. 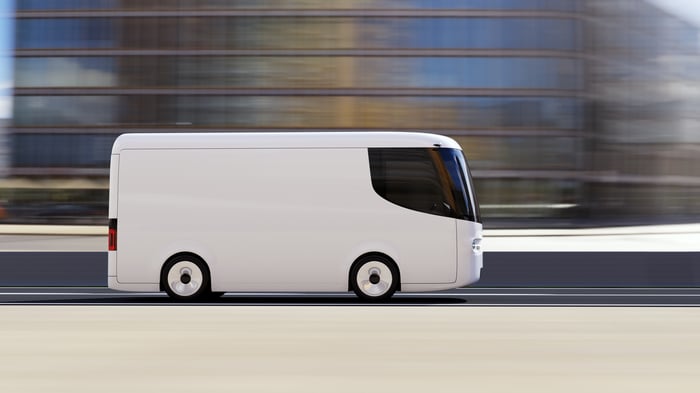 Perhaps unsurprisingly, traders reacted negatively. Its share price plunged as much as 14% the day Workhorse made the recall public. Overall, the company's shares remain down more than 80% from their early 2021 peak. Short-sellers are betting on the company's continued misfortune, with short interest as roughly 36% of float by mid-September.

While Workhorse's situation looks bleak on the surface, several pieces of news suggest it might eventually pull out of its slump. The board appointed a new CEO, Richard F. Dauch, in late July. While the company naturally portrays the pick favorably, its note that Dauch has "more than 25 years of industry experience, including 12 years serving in CEO roles" indicates the new chief executive at least has a top-level business background.

Possibly more significantly, Dauch is taking action on several fronts. He led the decision to terminate the USPS contract complaint. He declared his belief that "the best way for us to work with any governmental agency is through cooperation, not through litigation." He added by "withdrawing our protest, we can also better focus our time and resources on initiatives that we expect will be more productive."

Improving potential future working relationships with the government, and halting the expense of a likely futile complaint, could be positive steps for the company. So, too, could the recall and suspension of C-1000 production. While the recall is partly to improve safety features, the company notes there are no customer safety complaints. Workhorse says it's working on "enhancements" to the C-1000's design based on feedback. It states these improvements are "primarily related to vehicle dynamics to increase the vehicles' payload capacity," which could make the vans more appealing to future customers.

Workhorse also sold 72% of its shares in EV start-up Lordstown Motor Corporation (RIDE -3.48%). According to its second-quarter press release, the sale will give it $79 million in net proceeds. While this represents an approximate $52 million loss from the original purchase price, the sale will add to the company's $156.6 million in cash, enabling it to continue operating longer and potentially ramp up production of its improved vans along with its drone technology.

One final element potentially weighing in Workhorse's favor is it actually has physical vehicles on the road. Some of its EV competitors, including several with significant valuations, are still at the prototype stage, with no commercial vehicle sales whatsoever.

Does Workhorse belong in your stable of stocks?

The Wall Street reaction to Workhorse's C-1000 recall, following on the heels of its USPS loss, is understandable, but might be premature. The company's new leader is aiming in a fresh direction. While it's imprudent to expect significant results from just a few executive statements before actual performance confirms a turnaround, Dauch seems to be trying to turn the corner on Workhorse's difficulties.

With cash soon to be bolstered by the proceeds of its Lordstown stock sale and improvements to the C-1000 van underway, the company might start seeing significant performance increases over the next year or two. Anyone investing in industrial stocks or electric car stocks might want to remain cautious at this point, but watch Workhorse's results in the medium term for signs of a turnaround and an eventual climb into profitability.