Please ensure Javascript is enabled for purposes of website accessibility
Log In Help Join The Motley Fool
Free Article Join Over 1 Million Premium Members And Get More In-Depth Stock Guidance and Research
By Adam Levine-Weinberg – Sep 29, 2021 at 8:21AM

The iconic home furnishings retailer still needs to show investors that it can compete with fast-growing rivals like HomeGoods and Target.

Shares of Bed Bath & Beyond (BBBY 4.61%) have made a huge comeback over the past year, as many investors have embraced the new management team's turnaround plan. By contrast, progress on the turnaround itself has been more limited, so far. In the first quarter of fiscal 2021, comparable sales increased just 3% compared to 2019 -- a terrible year for the company -- and Bed Bath & Beyond eked out a tiny adjusted profit of $0.05 per share.

Investors are hoping for significantly better results when Bed Bath & Beyond releases its second-quarter earnings report on Thursday. Here's what investors should keep in mind when looking at the company's results.

The No. 1 thing aiding Bed Bath & Beyond's turnaround attempt is that consumer spending on home furnishings has soared since the initial pandemic lockdowns began to ease last spring. Through the first seven months of 2021, sales at furniture and home furnishings stores jumped 22% compared to the same period in 2019, according to U.S. Census Bureau data.

Some top retailers have recorded even faster growth. In the first quarter of TJX Companies' (TJX 0.16%) 2022 fiscal year (corresponding roughly to the period from February to April), the off-price giant's HomeGoods unit grew sales by 53% compared to the same period two years earlier. Similarly, Target (TGT 0.60%) reported home department sales of $4.4 billion in its first fiscal quarter: up 47% from two years earlier.

Growth slowed a bit in the May to July period. Last month, TJX Companies reported that HomeGoods' sales soared 46% in the second fiscal quarter compared to two years ago. Target's home furnishings sales jumped 37% over the same period. Thus, demand for home furnishings items remains quite strong. In theory, this should be great news for Bed Bath & Beyond.

Bed Bath & Beyond has lagged

Unfortunately, Bed Bath & Beyond has struggled to capitalize on consumer demand in the home category. In the first quarter of fiscal 2021 -- which, for Bed Bath & Beyond, roughly corresponded to the months from March to May -- total sales came in just shy of $2 billion.

As noted above, comparable sales increased 3% compared to Q1 2019. However, total sales actually dereased 6% (adjusted for divestitures), reflecting the company's store closures. And whereas peers have reported excellent earnings results this year, Bed Bath & Beyond barely earned a profit.

During Bed Bath & Beyond's first-quarter earnings call, management projected that sales would total between $2.04 billion and $2.08 billion in the second quarter. That implied low-single-digit comp sales growth compared to 2020 but an even steeper 8% to 10% total sales decline relative to 2019. 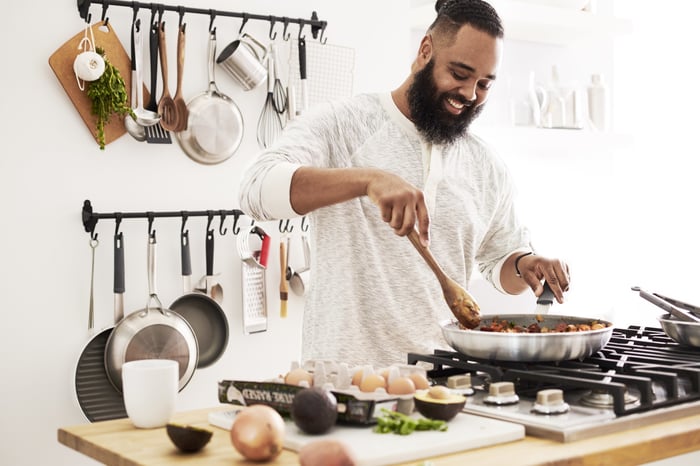 Bed Bath & Beyond shareholders might hope that this guidance was conservative. However, management gave this forecast on June 30: just before the latest wave of the pandemic began in the United States. If anything, the surge in COVID-19 cases and hospitalizations may have hurt store traffic in late July and August. Moreover, TJX and Target reported some deceleration in the growth rate of home furnishings sales last quarter.

What about gross margin?

Even with a relatively downbeat sales forecast, Bed Bath & Beyond projected that adjusted earnings per share would recover to between $0.48 and $0.55 this quarter. Improving gross margin is the linchpin of this forecast. Management estimated that adjusted gross margin would rise to between 35% and 36%, compared to 34.9% in Q1 and 33.9% in the second quarter of fiscal 2019.

On the plus side, Bed Bath & Beyond has launched several new private brands -- which tend to generate stronger gross margins -- this year. Furthermore, the combination of strong consumer demand and tight inventory has enabled many retailers to pull back on promotions to boost gross margin.

Bed Bath & Beyond needs to beat its forecasts

Even if Bed Bath & Beyond hits its guidance for the second quarter, its results are bound to be poor by comparison to the results of TJX Companies' and Target's home departments. That would potentially bode poorly for the company whenever home furnishings demand cools off.

Of course, if Bed Bath & Beyond misses its forecast, that would be even worse news for shareholders. Unless the company delivers a convincing earnings beat on Thursday, investors should stay away.