Stocks failed to mount a convincing recovery from Tuesday's plunge, but the eyewear specialist got a nice debut.

The stock market finished mixed on Wednesday, as an early attempt to regain some of the ground major market benchmarks lost on Tuesday ended up giving way to continued nervousness about the short-term impact of inflation and other macroeconomic pressures on stocks. The Dow Jones Industrial Average (^DJI -1.40%) and S&P 500 (^GSPC -1.79%) eked out small gains, but the Nasdaq Composite (^IXIC) ended up losing more ground.

Despite the market's recent jitters, the bull market over the past 18 months has prompted a record number of companies to go public. To make their stock available to the investing public, most have chosen either traditional initial public offerings or mergers with special purpose acquisition companies. However, a select few have offered their shares directly to investors, and that's the route that eyewear specialist Warby Parker (NYSE: WRBY) picked on Wednesday. Below, we'll take a closer look at how Warby Parker did and what its direct listing says about the health of the stock market.

Many investors have waited for Warby Parker to go public for quite a while, and so the direct listing got a lot of attention within the broader investing community. Initially, those watching the eyewear disruptor had expected the offering to give Warby Parker a valuation of around $3 billion, consistent with the most recent funding rounds from venture capital investors. 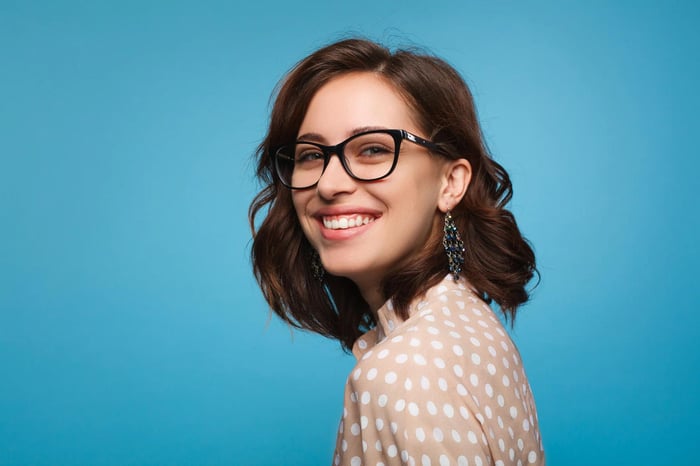 When the New York Stock Exchange got together to figure out a reference price to guide first-day traders seeking to buy shares of stock from private shareholders, it ended up setting the price at $40 per share. Unlike a regular IPO, in which participating investors actually get to buy shares at the pre-set offering price, this $40 per share number was intended only to provide a foundation from which investors could make their own decisions about what the stock was worth. Even with the $40 per share figure, Warby Parker had an implied market capitalization of nearly $5 billion -- an indicator of just how strong interest in the company was.

From there, things got even better for Warby Parker. The stock started trading just after 1 p.m. EDT at around $54 per share. It stayed at roughly that same level throughout much of the day, closing at $54.49 per share. That was a gain of 36% from the reference price.

Disruptor, or disaster waiting to happen?

Warby Parker raises a lot of controversy among investors. Bullish supporters point to the eyewear market as prime for e-commerce disruption, and Warby Parker believes its strategy to start out online and then gradually build out a network of traditional retail locations will help it build up brand awareness and take over market share in a highly fragmented market.

Yet many investors are skeptical. Sales growth was minimal in 2020, and although revenue growth in the first half of 2021 was 53% higher than in the corresponding period the previous year, Warby Parker has posted consistent losses recently. The company expects those losses to continue, and bearish investors also point to arguably comparable eyewear companies with much lower valuations compared to key metrics.

What the direct listing says about the stock market is that even with conditions getting a little choppy, companies are still willing to make shares available to the public at current valuations. That could suggest high valuations that aren't necessarily in investors' favor. If the minor pullback we've seen in stock markets turns into something bigger, then it will show that Warby Parker went public at just about the perfect time for its early investors.

These 2 Stocks Were Monday's Key Movers

5 Money Managing Tips You Should Know, According to Artificial Intelligence

Why Does Alphabet (Google) Have 2 Different Ticker Symbols?
376%