The stock price is up 450% over the past five years, but the growth in digital content is just beginning.

Adobe System's (ADBE -1.42%) transition to a software-as-a-service business strategy has led to big returns for investors. If you had bought shares in late 2016, you would already be sitting on a 450% gain, which is almost triple the return you would have had from a S&P 500 index fund.

Adobe generated $15.1 billion in revenue over the past four quarters, with the bulk of that coming from the Creative Cloud suite of products within its Digital Media segment, which includes Adobe's flagship software such as Photoshop, Lightroom, Acrobat, and Illustrator that many professionals use every day.

Still, Adobe is not a small, growing company anymore. It currently commands a large market cap of $287 billion, so how much further can Adobe's stock price climb? 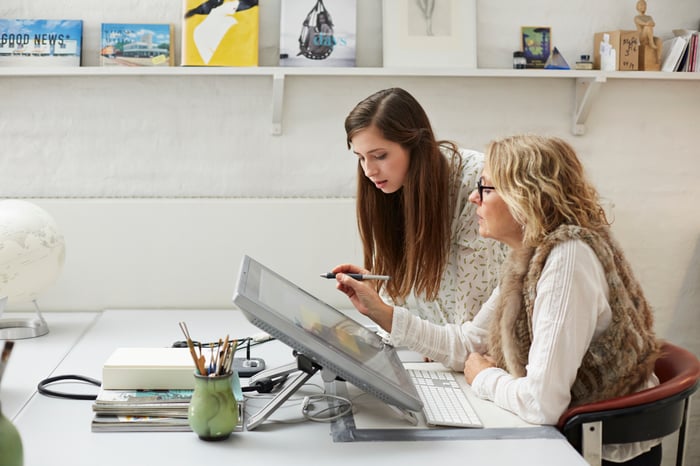 Why Adobe continues to grow

Adobe is the Microsoft (MSFT -0.31%) of creative software. Like the software titan, Adobe benefits from a powerful competitive advantage built on the network effect and based on the ubiquity of Adobe's software. For example, its PDF file format receives more than 50 million searches every month, and its feature-rich creative software suite is widely used by consumers and professional artists.

For many users, there isn't a viable alternative on the market to Photoshop or Lightroom. Sure, a photographer can use Apple's (AAPL -1.76%) free photos app that comes pre-installed on Apple's iDevices, but Adobe's Lightroom offers more editing features that make it worth the small monthly subscription fee.

Further, when customers share digital media created with Adobe, it encourages others to adopt Adobe's software to collaborate on projects. That's the power of the network effect.

Because of these advantages, Adobe's strategy is to keep investing in additional features to make its products more useful and work better together. Adobe is investing more in implementing new features using artificial intelligence and machine learning with Adobe Sensei, as well as preparing for the growth in augmented reality and 3D content. The long-term goal is to drive more growth in new users and average spending per user by upgrading them to higher-priced offerings.

Adobe has also bolstered its e-commerce offerings for enterprise over the past few years with the 2018 acquisition of Magento. Adobe already offered the tools to help businesses create a website, but, after the Magento deal, it has a more fully fleshed-out offering by helping businesses with order management.

Adobe has a great opportunity over the next few years to gain additional business customers. "We continue to see subscription revenue acceleration in Digital Experience as large and midsized enterprises increase their investments in customer experience management," CFO John Murphy said on the fiscal Q3 earnings call.

It's noteworthy that management's fiscal Q4 guidance calls for Digital Experience to increase revenue at approximately 22% year over year, which is slightly faster than the Digital Media segment's 20%.

Adobe is still a good investment

The stock looks expensive at first glance, trading at a high price-to-earnings ratio of about 49, but Adobe has consistently earned a high valuation for several years. The main reason is that Adobe has a long runway of growth, with a long-term addressable market of approximately $147 billion.

Plus, about 97% of its creative software revenue — its largest business — is generated from subscriptions, which keeps the top line relatively stable and makes forecasting future earnings growth a bit easier. Currently, analysts expect Adobe to increase earnings per share at an annualized rate of 17.8% per year.

It's not too late to invest in Adobe. The technological advancement of mobile devices should continue to stimulate demand for Adobe's creative cloud software that can be accessed across different devices. While Adobe's high valuation could limit returns in the near term, the explosion in digital content creation may take several more years to fully play out. Adobe is the leader in this space, so I expect the business to grow into its valuation and deliver market-beating performance over the long term.