Please ensure Javascript is enabled for purposes of website accessibility
Log In Help Join The Motley Fool
Free Article Join Over 1 Million Premium Members And Get More In-Depth Stock Guidance and Research
By Rich Duprey – Sep 30, 2021 at 7:15AM

The troubled retailer is conjuring up nostalgia to try to regain consumer relevance.

Banana Republic is hoping nostalgia can turn around a brand that hasn't been relevant in decades. It wants to go back to the future with a brand reinvention that winks at its heritage of safari couture, but with a modern twist.

In reality, Gap (GPS 2.61%) should just retire the tired, troubled retailer by closing it down or selling it off. It could then invest the proceeds into its growing, more authentic labels like Old Navy and Athleta.

There was a time when Banana Republic was considered cool, but that was years ago, decades even, and shaking the sand out of its Indiana Jones-style wardrobe won't spark interest with today's consumer. 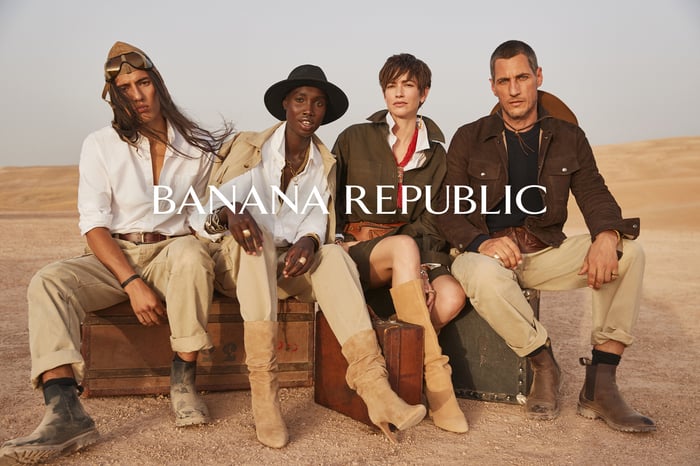 Saying nothing by saying a lot

There's a lot going on there that doesn't do anything but give the impression the business has no idea where it wants to go. Instead of picking a lane, Banana Republic is swerving all over the road.

Gap has long faced problems with the retailer. Even ignoring the forgettable pandemic-wrecked year of 2020, Banana Republic has only had one year in the past seven where comparable-store sales were positive.

Where many retailers have reported strong year-over-year gains in 2021 (no surprise since stores were shut for most of the quarter last year), they're also showing a return to growth by posting gains on a two-year basis.

Not so at Banana Republic, which remains in decline. While comps were 41% higher this past quarter compared to last year, the chain's net sales were down 15% against 2019's level, indicating it remains a struggling brand. Trying to use nostalgia and flowery language to reignite growth is not a long-term solution, even if it manages to spur some near-term sales.

Go with a winner

Gap has a real opportunity to turn itself around. It struck gold with athleisure brand Athleta, which posted 35% net sales growth over 2019 on a 27% gain in comps.

At the end of July, Gap had over 500 Banana Republic locations, but just 212 Athleta stores, yet the athleisure outlet posted quarterly sales totaling $341 million versus $495 million for its sibling, or just a third less.

Gap plans to close 130 Banana Republic stores by 2024 as part of a plan to shut 350 of them overall, while at the same time opening more Athleta and Old Navy stores. This year alone, it plans to open as many as 40 Old Navy stores and 30 new Athleta locations. That's smart and represents time and money well spent.

Old Navy is Gap's biggest chain with annual sales of $8 billion, which it projects can grow to $10 billion by 2024. Athleta, for which Gap wants to have as many as 300 stores, is expected to become a $2 billion brand within two years.

Banana Republic is just in decline, and Gap needs to bite the bullet. It should either close all the stores or sell the brand and hope to realize some value from it.

It's time to retire the Banana Republic brand

Something clearly needed to be done with Banana Republic, and the direction the retailer is choosing by going back to its past seems like a missed opportunity.

In an already unforgiving retail environment, Gap should make a clean break and keep working with its most vibrant brands.