Stock market volatility has become the nature of the beast on Wall Street, and the Nasdaq Composite (NASDAQINDEX:^IXIC) showed some of the impacts of that volatility on Thursday. The index opened sharply higher, but the broader market gave up its gains later in the session. By 12:30 p.m. EDT today, the Nasdaq was down about a quarter-percent, which was enough to actually lead major benchmarks.

Earnings season won't officially start for another week or two, but there were still some high-profile Nasdaq names giving their latest results on Thursday. Bed Bath & Beyond (NASDAQ:BBBY) released troubling numbers that sent the stock falling sharply, but Paychex (NASDAQ:PAYX) managed to move higher. Below, we'll look more closely at both stocks.

Shares of Bed Bath & Beyond had dropped 23% by early afternoon. The household goods specialist reported quarterly results that raised new questions about its long-term viability in an increasingly competitive retail landscape. 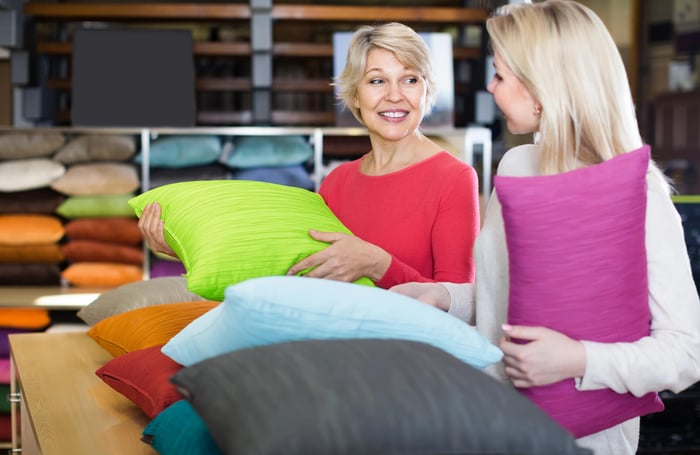 Bed Bath & Beyond's fiscal second-quarter numbers failed to maintain the upward momentum that investors had seen recently from the hard-hit company. Revenue of $1.985 billion was down 26% from year-ago levels, with comparable-store sales falling 1%. Gross margin fell year over year, and Bed Bath & Beyond just barely managed to eke out a $4 million profit that translated to $0.04 per share on an adjusted basis.

CEO Mark Tritton tried to maintain confidence, blaming results later in the quarter on "external disruptive forces" such as the delta coronavirus variant and supply chain challenges. Those factors were especially notable in key markets like Florida, Texas, and California. Even with the short-term headwinds, though, Tritton believes Bed Bath & Beyond remains on track with its three-year transformation strategy.

Investors really wanted to see Bed Bath & Beyond show continued progress with its turnaround, but the recent setback threw cold water on their enthusiasm. Now, many of the old arguments against the home goods retailer are apparent once again, and that could cause interest in the stock to diminish for the foreseeable future.

Elsewhere, shares of Paychex were up more than 5%. The payroll and HR services specialist got a nice bump higher in its fiscal first-quarter financial report.

Paychex benefited from a healthier environment for employment. Revenue climbed 16% year over year, and adjusted earnings of $0.89 per share were not only up more than 40% from the year-ago period but also topped expectations among those following the stock. The company specifically noted more checks per client as a result of its clients bringing their employees back to work with the COVID-19 pandemic beginning to ease somewhat.

But Paychex is taking other steps to boost revenue. The company has fleshed out its suite of business solutions, with considerable success in getting customers to use HR outsourcing capabilities to go beyond simple paycheck management. Paychex also offers professional employer organization health insurance plan services, and the rise in numbers of employees and average wages are helping to boost that segment's sales as well.

As the economy recovers, investors will try to sort out the effects of rising employment and greater discretionary income on certain companies. Although Paychex's gains make sense in the context of improving economic conditions, Bed Bath & Beyond serves as a useful reminder that not all ships will rise with the tide.