These two stocks have crushed the market's 31% growth over the past year. Here's why those gains could continue.

AI-based lending disruptor Upstart Holdings (UPST -0.41%) and the international e-commerce and gaming giant Sea Limited (SE -0.70%) are both near all-time highs, likely because of their near-flawless execution lately. Upstart has grown its partnerships with banks -- where it determines creditworthiness for the banks' customers -- to relieve its customer concentration, and Sea Limited -- a company that operates in e-commerce, gaming, and financial services -- has been seeing tremendous success with its game, Free Fire, in India, and it might have plans to continue expanding in the region.

Here's why I think these two stocks that have crushed the market over the past year will continue to do so over the next five years. 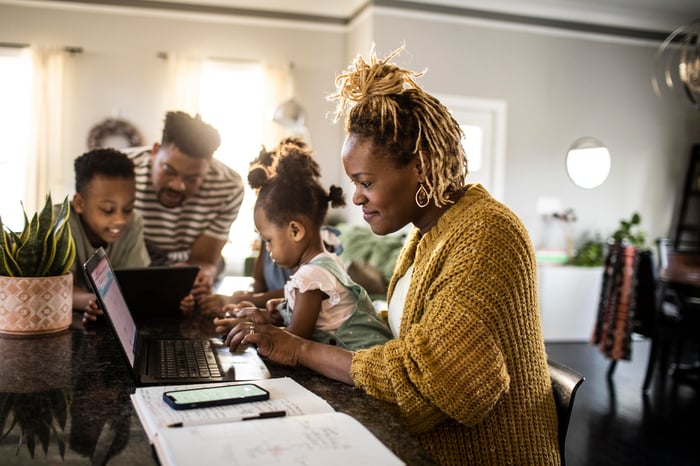 Singapore-based Sea Limited has dominated Southeast Asia, but it is continuing to expand into new markets. Garena, Sea's gaming platform, allows game developers to create games. Some of the most popular games to be developed on Garena have been those that Sea has developed itself, namely Free Fire. To expand internationally, Sea typically introduces Free Fire and when it gains popularity, Sea then places in-game advertisements for its e-commerce arm, Shopee, to drive gamers onto the Shopee platform. Once Shopee gains popularity, Sea then promotes its digital finance arm, SeaMoney, to assist in payments on the platform.

With this strategy, Sea is growing larger than life -- not only growing 90% year over year for each of the past five quarters, but increasing its total revenue growth from 93% in the second quarter of 2020 to over 150% growth in the most recent quarter. This has been driven by consistent Free Fire success: In the second quarter of 2021, Free Fire was the highest-grossing mobile game in Southeast Asia, Latin America, and India, maintaining this position for the past eight consecutive quarters in Southeast Asia and Latin America, and three consecutive quarters in India.

While Southeast Asia and Latin America have been the company's primary growth drivers thus far, Sea's next target is India. Free Fire has seen strong adoption in India so far -- maintaining its position as the highest-grossing mobile game for the past three quarters -- which is the first phase of Sea's growth strategy. Its second phase, Shopee expansion, is on the way. The company has been slowly recruiting India-based sellers to join Shopee by providing guides explaining how merchants sign up to the platform, comply with tax guidelines, and handle bulk orders.

None of this growth has led to sustainable profitability for Sea -- posting a net loss of $434 million in the second quarter of 2021. Its net loss margin, on the other hand, is getting better -- up to negative 19% from negative 45% in the second quarter of 2020. Sea's valuation is still high at 23 times trailing-12-month sales. Investors are paying up for Sea's extreme growth, and while 90% revenue growth is not sustainable over the long run, the company could see 50% top-line growth for the next several years if it continues to win loyal users in Latin America and India. If it can successfully integrate Shopee into these regions, boosting revenue growth for that platform segment, Sea could continue to crush the market.

Upstart's stock price has risen over 1,000% already since its initial public offering in part because the lending platform has been executing flawlessly. Upstart uses a machine learning platform to determine credit worthiness for customers who have poor credit and may otherwise be automatically turned down for a loan. By using an intelligence platform that is constantly learning more about its applicants, Upstart gives small and medium-sized banks loan decisions about customers who have poor or no credit history.

Seventy-one percent of Upstart's 286,000 loan decisions were fully automated and instantly approved in the second quarter of 2021. Revenue increased 60% quarter over quarter to $194 million -- and helped the company reach $37 million in net income for the quarter. Net income grew over 250% sequentially, resulting in a net income margin of 19%. These financials are strong, and when considering the company's $4.2 trillion consumer credit total addressable market, Upstart has the potential to continue growing.

One of the main risks is its customer concentration. In 2018, one customer made up 81% of the company's total revenue, and in the fourth quarter of 2021, two customers made up 81% of its total revenue. This concentration has been steadily decreasing due to partnerships with customers like Water and Power Community Credit Union and Patelco Credit Union -- both of which became new customers since Upstart reported second-quarter 2021 results where it reported that one bank originated 60% of loans and 62% of revenue. While this concentration is still a risk factor, Upstart's decreasing reliance on this one bank shows that the company is gaining more customers and reducing that concern.

At a valuation of 58 times sales, the company is even trading much higher than other fast-growing technology companies like Riskified (RSKD -3.57%) -- an AI-based risk analysis company -- which is trading at 22 times sales. With such heavy concentration in its revenue, it is reasonable that some investors are skeptical, but Upstart's platform is continuously learning and becoming more accurate as more customers join, which could allow the platform to become tremendously profitable. If Upstart can increase its volume, customers, and revenue while decreasing concentration, the company will be poised to flourish over the long run.