More than 300 stocks have doubled in 2021. Let's look at some that can double again in the next three months.

It's been a volatile year for stocks, but naturally some investments have fared better than others. Over 300 stocks have more than doubled in 2021. Many of those winning investments will be lucky if they can hold those gains through the final three months of the year, but what about the names that have the potential to double again?

Crocs (CROX 4.31%), AMC Entertainment (AMC), and Upstart (UPST -1.94%) have more than doubled in value through the first nine months of 2021. Let's see why they have what it takes to possibly repeat the feat in the fourth quarter. 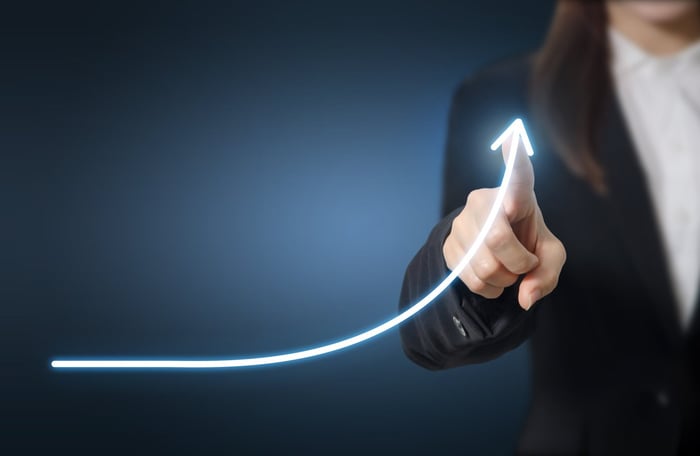 Remember those bright rubbery shoes with holes in them? They're back in a big way. Crocs sales are booming since the pandemic began, and the stock is following suit with a 129% increase through the first nine months of 2021.

The comfortable resin shoes were already making a comeback before the COVID-19 crisis with double-digit revenue growth in 2019 before repeating the feat in 2020. Momentum is what's really taking Crocs to a higher level in 2021.

The year began with the footwear maker projecting 20%-to-25% top-line growth for the entire year back in February. Guidance was bumped higher -- to between 40% and 50% growth -- the following quarter. It happened again this summer, with Crocs now targeting a 60%-to-65% surge in revenue for all of 2021. What do you think will happen if those targets get pushed even higher when it reports third-quarter results later this month?

Despite a stock that has popped nearly sixfold since the start of 2019, Crocs is reasonably priced given its accelerating growth. It's trading at 21 times this year's earnings and just 17 times next year's target. There's clearly room to increase those multiples, and Wall Street's finally as comfortable with Crocs as an investment as its customers are in its shoes.

You may be surprised to find the country's leading multiplex operator on this list, but plot twists are what make movies so good. It's certainly true that AMC Entertainment has appreciated -- in terms of both stock price and a fivefold explosion in shares outstanding -- to the point where its valuation is out of whack relative to its peers'. If you want a pure investing play on the movie theater industry's recovery, you will find more attractively priced stocks to scratch that itch.

However, as a meme stock and cultural phenomenon it's hard to argue against what AMC has done to translate its popularity among retail investors into a legitimate market share grab in the recovery process. No company has seen its market cap inflate as much as AMC has this year, but this is also a stock that enters the fourth quarter with a stock price that is a little more than half of what it was when it peaked in June. In short, it would have to double from here to revisit its all-time high -- but isn't that always possible with the poster child for 2021 momentum stocks?

Fundamentally speaking, the catalysts are also there. Shang-Chi and the Legend of the Ten Rings shattered box office records over Labor Day weekend, but the initial excitement fizzled out when subsequent weekends were abysmal. However, it's all about the pipeline. Studios pushed out September releases into October and beyond when the delta variant resulted in a spike in COVID-19 cases. We're now seeing the highly anticipated films start to come back, starting with the new James Bond movie next weekend. The fourth quarter should be a lot stronger for the industry than the naysayers think, and if AMC stock gets back to where it was in early June -- fundamentally earned this time -- it will have to double from here.

I love when industries ripe for disruption get upended, and that's what Upstart is doing with the lending industry. Upstart uses artificial intelligence and machine learning to make better calls on assessing risk profiles and creditworthiness for folks who don't typically get approved for consumer loans.

Growth is bonkers. Revenue seemed to be decelerating sharply, with slowing growth spurts of 89%, 52%, and 27% in the last three years respectively. Now that consumers are becoming aware of Upstart as a better alternative to payday loans and other predatory lending products, business is skyrocketing. Revenue rose 90% in the first quarter, only to surge 1,018% in its latest report. And no, that's not a typo.

With Upstart now expanding into the auto loans market, the potential for its better alternative to stodgy credit scores is just getting started. The stock has been a seven-bagger through the first three quarters of 2021, but the runway is long for this disruptive jet.