Please ensure Javascript is enabled for purposes of website accessibility
Log In Help Join The Motley Fool
Free Article Join Over 1 Million Premium Members And Get More In-Depth Stock Guidance and Research
By Josh Kohn-Lindquist – Oct 1, 2021 at 8:03AM

Founded in 2010, Coupang (CPNG 0.66%) didn't take long to evolve itself into the market leader in South Korea's e-commerce industry, posting an annualized run-rate of $18 billion as of its most recent quarter. Led by Founder and CEO Bom Kim, Coupang is now taking a page out of Amazon's (AMZN -0.77%) playbook by focusing on long-term cash flow generation versus short-term profitability, which true investors should love to see from such a rapidly growing company.

However, Coupang has a unique advantage over its U.S. peer: South Korea's incredibly dense population compared to its geographical size. Thanks to this density, the company could morph into a more efficient version of Amazon while offering further growth optionality through its food delivery services. 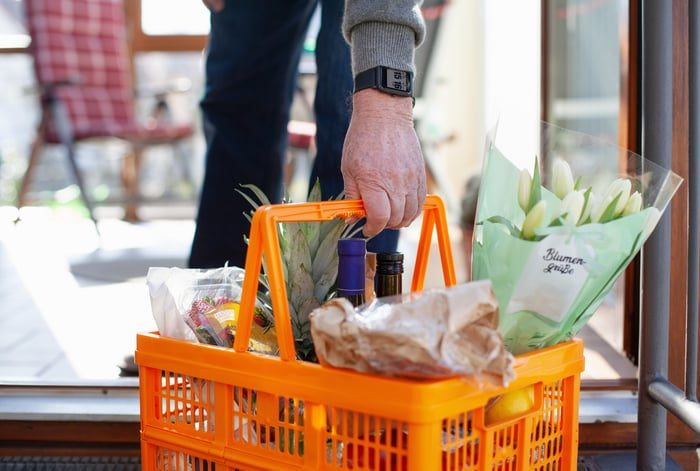 A condensed version of Amazon

With a population of about 50 million, South Korea is less than one-sixth as populous as the United States but is actually 14 times denser, thanks to the fact that it is roughly the geographical size of Indiana.

This gives Coupang an economy of density in comparison to Amazon as it looks to continue building out its logistical network. Furthermore, of South Korea's population of roughly 50 million, 37 million are online shoppers, nearly double the company's current customer count of 17 million.

While customer count growth of 26% year over year is great, it is the 36% year-over-year growth of the company's revenue per active customer that should have investors excited. As Coupang continues to expand its product base and add to its list of services, this revenue-per-active-customer growth indicates customers are becoming entrenched in its overall ecosystem.

The company continues to build out its fulfillment and logistics infrastructure, foregoing profits today for higher returns down the road. As Kim explained during Coupang's second-quarter earnings call, "These investments continue to strengthen our moat, providing the foundation to support growth, drive economies of scale and raise the bar even higher on service levels for customers."

In an example of reinvestment, Coupang has been aggressively expanding its two new food delivery services: Rocket Fresh and Coupang Eats. Reporting an EBITDA loss of $122 million for Q2, Kim explained that $120 million of this loss went directly toward fueling the delivery services' rapid growth.

For Rocket Fresh, Coupang's grocery delivery service, revenue doubled year over year in the second quarter and now generates an annualized run-rate of over $2 billion, a figure that is hard to fathom considering it was created just three years ago. Going back to South Korea's population density, it will be interesting to watch for continued margin improvement in this segment as the company continues to ramp up its scalability.

As for Coupang Eats, look no further than the finances of Uber and DoorDash to see just how hard it is to become consistently profitable in the food delivery industry. However, having tripled its revenue over just the last two quarters, Coupang Eats is quickly moving toward scalability as its loss per order dropped by 50% year over year. Yet again, compared to its American peers, the company has a huge advantage thanks to not only its economy of density but its adjacent logistical insights from its e-commerce operations.

Coupang stock has a compelling valuation

While valuation should never be used as an investment thesis on its own, it can be useful to get a sense of Coupang's valuation compared to some of its e-commerce peers.

Surprisingly, Coupang's enterprise-value-to-gross-profits ratio is closer to Amazon's than it is to younger peers Sea Limited (SE -2.35%) and MercadoLibre (MELI -1.13%). This, paired with the company's promising year-over-year 71% revenue growth rate in the second quarter, shows that the stock's 40% price drop since its March IPO may have created an intriguing opportunity for investors. Looking ahead, investors should focus on growth from Coupang's revenue-per-active-customer metric and the continued expansion of its delivery services.