The international pizza chain is thriving during the pandemic, but that will not last forever.

Since the pandemic's onset, the world's largest pizza company has experienced a surge in orders. Domino's Pizza (DPZ 0.03%) has long offered customers the option to have a pizza delivered to their homes either for free or for a small fee of a few dollars. That model seems custom-made to do well during a global pandemic when folks studiously avoid interactions with people outside of their families.

Still, the pandemic will not last forever. And so the current favorable business conditions for Domino's will not stay either. Let's consider some near-term and long-term factors, and determine if Domino's stock is worth buying right now. 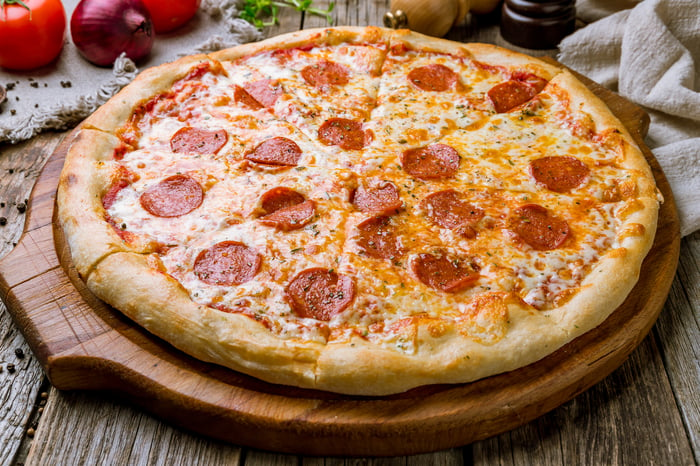 Interestingly, Domino's operates a franchise model. Franchisees own the vast majority of the 17,819 Domino's locations worldwide. Only 364, which all happen to be in the U.S., are company-owned. The franchise model decentralizes responsibility broadly across its store base. It also reduces the capital investment needed for expansion since franchisees put that up.

The pandemic's effects on Domino's

Business thrived at the pandemic's onset as in-person dining at restaurants was disallowed, and the company's delivery model worked well. Folks were more inclined to order for delivery because they were not spending to eat at restaurants. Indeed, revenue increased by 13.8% for Domino's in fiscal 2020.

Still, the pandemic isn't all good news for Domino's. The company is facing challenges in opening new stores due to a shortage of equipment and difficulty in staffing those stores. Other than modest increases, wages for employees have largely stayed about the same. Meanwhile, on-the-job health risks have increased exponentially with the coronavirus in circulation. It's no wonder that some people are hesitant to join Domino's staff.

Looking at the longer term

There is also uncertainty around how restaurant-order aggregators like DoorDash will affect Domino's. On the one hand, their proliferation got consumers accustomed to paying higher delivery fees. On the other hand, it gave formerly exclusive dine-in and pick-up restaurants the option to deliver meals.

It's too early to tell which direction it will go, but my early guess is that the competition hurts Domino's. After all, consumers suddenly have more choices when deciding what to order for delivery. Over the past decade, Domino's increased revenue at a compounded annual rate of 10%. It would not surprise me if that rate decreased at least a little over the next 10 years.

At the same time, Domino's has built an efficient business that has expanded operating profit margin over time (see chart). A healthy operating margin means the company has room to lower prices, increase customer value, or use other tools to beat the competition. 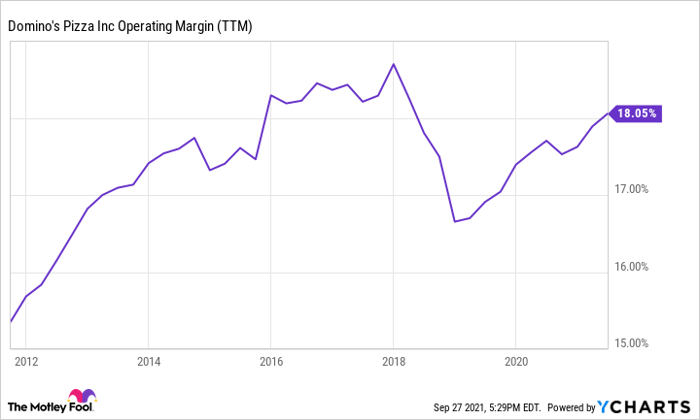 Domino's is an excellent business that is getting even better. The problem for potential shareholders is that the company's excellent prospects are no secret to the market. The stock is trading at a price-to-earnings ratio (P/E) of 39 -- close to its highest in a decade -- so it's expensive on a historic basis. And it's also higher than the S&P 500's current P/E of 34. 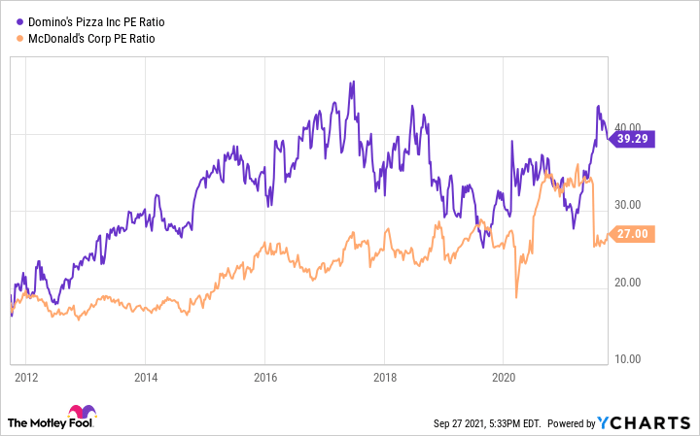 Additionally, if you compare Domino's to McDonald's, another restaurant stock that runs a franchise model, Domino's is selling at a premium to its peer (see chart). Any way you slice it, Domino's is expensive right now and there's no need for investors to rush out and buy the stock.

Domino's Pizza Stock Jumped on Its Earnings Release: What Investors Should Know
371%