A COVID-19 pill could be a game changer.

What's juicing Merck's stock price this morning? Ahead of the opening bell, the company announced that its oral antiviral medication molnupiravir -- developed in conjunction with Ridgeback Biotherapeutics -- cut the risk of hospitalization for COVID-19 by half. This result reportedly comes from a planned interim analysis of a phase 3 trial of the drug in at-risk, nonhospitalized adult patients with mild-to-moderate COVID-19. Even more impressively, zero patients who received molnupiravir in the study passed away, whereas eight patient deaths were recorded in the placebo wing of the trial. 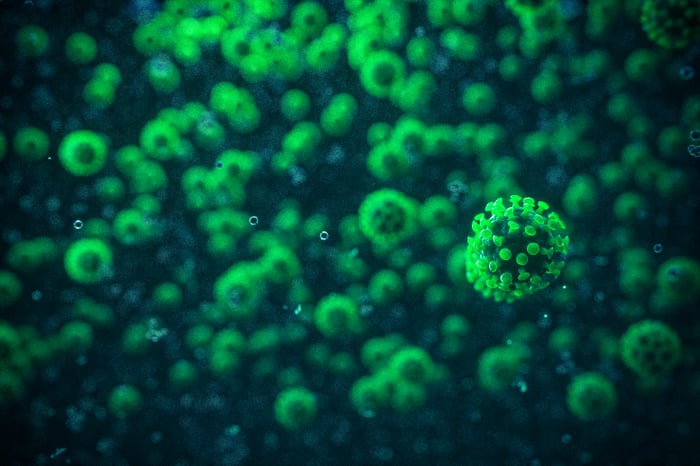 Because of the sharp contrast in severe outcomes (hospitalizations and deaths) between the study groups (patients on molnupiravir versus placebo), the study is being halted early on the recommendation of the independent Data Monitoring Committee, in consultation with the U.S. Food and Drug Administration, according to the press release. Merck thus plans to file an application for Emergency Use Authorization for the drug in the U.S. as soon as possible.

Not surprisingly, COVID-19 vaccine leaders such as Pfizer (PFE 1.90%), Moderna (MRNA 3.17%), and Novavax (NVAX 2.18%) are all down today on this news. As of 8:54 a.m. Friday morning, Pfizer's shares are down by 1.8%, Moderna's stock is in the red by 4.77%, and Novavax's equity is off 7.53%. Each of these companies stands to lose billions in future revenue if its COVID-19 vaccine takes a back seat to oral antiviral medications like molnupiravir.

Pfizer reportedly has its own late-stage antiviral pill for COVID-19 under development, which could soften the blow of a EUA for molnupiravir. But Moderna and Novavax are both banking on their respective COVID-19 vaccines being big sellers -- at least for the next few years.

With the FDA keenly focused on medications for COVID-19, there's a good chance that Merck's drug will be reviewed within a matter of weeks. What's important to understand is that an oral medication with this type of effectiveness could bring the pandemic to a functional close. COVID-19 will likely be part of the seasonal respiratory suite of illnesses for good, but these types of treatment modalities could tamp it down from a life-threatening experience to a passing respiratory illness that can can be treated at home more often than not. That is a huge deal -- and a solid reason for Merck's shares to be screaming higher this morning.