The videoconferencing company and peer Five9 made a big announcement in the morning.

Shares of Zoom Video Communications (ZM -0.28%) zoomed higher on Friday, rising 2.3% to end the week on a high note. The spur was the cancellation of a high-priced acquisition the prominent videoconferencing company agreed to several months ago.

In July, Zoom agreed to pay roughly $14.7 billion in an all-stock deal for call-center technology specialist Five9 (FIVN -0.24%). On Friday, that deal was officially scuttled, with both companies separately announcing that they had mutually agreed to terminate their merger agreement. 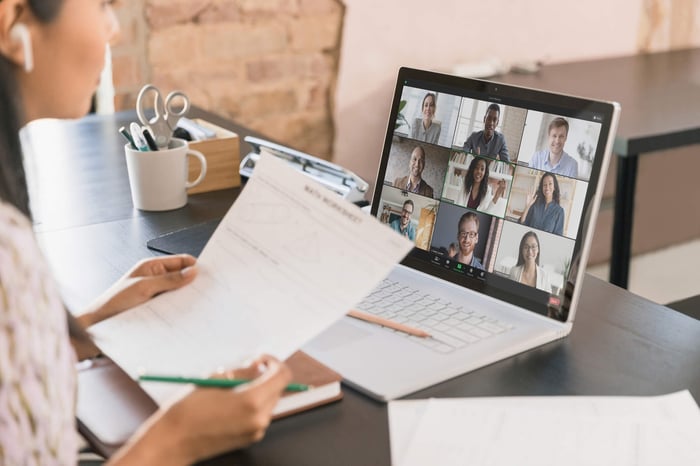 Neither company delved deeply into its own reasons for abandoning the deal. In its press release on the matter, Five9 quoted its CEO Rowan Trollope as saying that his business not combining with Zoom opens "significant potential for value creation as a stand-alone company."

In its tersely worded press release, Zoom quoted CEO Eric Yuan as saying that "financial discipline is foundational to our strategy," implying that nearly $15 billion (even in stock) is a big pile no matter how complementary an acquisition might be.

Zoom doesn't seem to be giving up on its quest to push into Five9's area of expertise. Yuan was also quoted as saying, "The contact center market remains a strategic priority for Zoom, and we are confident in our ability to capture its growth potential."

He pointed out that the company's homegrown Zoom Video Engagement Center for that segment is to launch early next year, and "will be a flexible, easy-to-use solution that connects businesses and their customers."

As for Five9, investors might not have considered Zoom to be an ideal partner for the up-and-coming tech company. Following news of the canceled merger, they bid Five9's stock up by 4.7% on Friday.