Though these companies have recorded solid financials of late, investors are overlooking them.

Growth stocks can sometimes trade at inflated valuations because of their attractive long-term potential. So if you get the opportunity to invest in a growth stock that isn't trading at a premium but rather at a discount, you should definitely consider adding it to your portfolio. 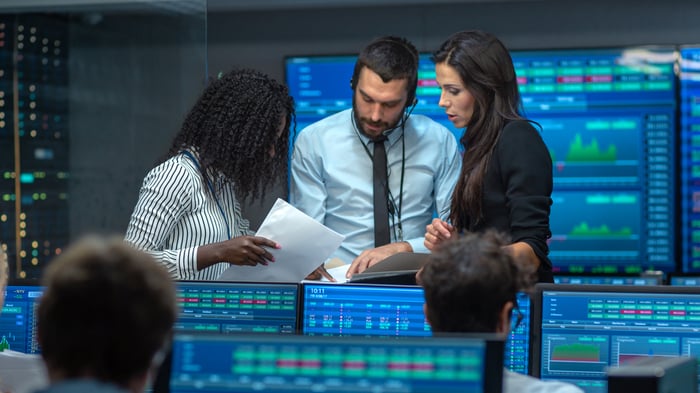 Healthcare giant Bristol Myers Squibb is a stock that investors could easily be overlooking right now. From afar, its financials look horrible. For the trailing 12 months, the company incurred a net loss of $5 billion. So investors relying on stock screeners to try and find good buys could easily overlook Bristol Myers -- and they have. Year to date, shares of the healthcare stock are down about 2% while the S&P 500 has soared 16%.

But investors who dig a little deeper will find a slightly different story. The huge loss is in fact due to a massive research and development charge of more than $11 billion that the company incurred for its acquisition of MyoKardia, a clinical-stage biopharmaceutical company that develops cardiovascular medicine. That negatively impacted the fourth quarter of last year and is still impacting the trailing 12-month numbers.

In the past two quarters, however, the company has been firmly in the black. Through the first six months of 2021, Bristol Myers' revenue of $22.8 billion has risen 9% year over year, and its net earnings have flipped from a $846 million loss in 2020 to a $3.1 billion profit.

Meanwhile, with free cash flow of $11.7 billion over the past four quarters, its dividend also looks rock-solid. The company has paid out $4.2 billion during that time while also making stock repurchases of $4.5 billion. This serves as further proof that accounting income alone can't be relied on to assess the health of a company's operations. Cash flow is arguably a much more important indicator than net income -- and by that metric, Bristol Myers is doing just fine.

So a closer look at Bristol Myers suggests the company is a much safer buy than its numbers may appear at first glance. A forward price-to-earnings (P/E) ratio can be useful for companies when a bad quarter or two have weighed on their numbers. And by that measure, Bristol Myers only trades at a P/E of 8 — incredibly cheap compared to other healthcare stocks, such as Merck (MRK -1.00%) and Amgen (AMGN -0.67%), which both trade at about 13 times their future profits.

Finally, there's the 3.3% dividend yield, which is more than twice as much as the S&P 500's 1.3%. Whether you're a growth investor or love a good dividend, this is an underrated healthcare stock that should be on your radar.

Another stock that's trading at a low valuation is ViacomCBS. At a forward P/E multiple of just 10, it's nowhere near the premium that investors are paying for other companies in the entertainment and streaming business, such as Netflix (NFLX -2.78%) and Walt Disney (DIS -3.60%) -- trading at 56 and 70 times their forward profits, respectively.

Admittedly, ViacomCBS' Paramount+ streaming service isn't as popular, and that could be a reason investors aren't giving the stock as much of a chance. Overall, the company has a total of 42 million global streaming subscribers (including Paramount+ and other smaller services such as Pluto TV). By comparison, Netflix has more than 200 million subscribers while Disney+ now has 116 million.

But Paramount+ doesn't have to be the top streaming service for ViacomCBS to be an attractive buy. In its latest quarter ended June 30, the company reported that streaming revenue grew 92% to $983 million from the year-ago period and advertising revenue rose 24% to $2.1 billion.

The lone blemish for the company was its "licensing and other" segment, which fell 36% to $1.2 billion -- hurt by the absence of theatrical releases during the pandemic. That kept the company's sales growth relatively modest last quarter, rising 8% to $6.6 billion. However, as the economy continues to recover from the pandemic, those numbers should get stronger.

Meanwhile, ViacomCBS also offers investors an above-average dividend yield of 2.4%. And with free cash of $2.6 billion over the past 12 months, it is generating more than enough to cover the $601 million in dividends it paid out during that time.

So, while Paramount+ may be an afterthought for some investors looking to go into top streaming stocks, that in fact could be an opportunity. ViacomCBS shares still fly under the radar -- up just 8% this year. As subscribers continue to increase and revenues improve, it may just be a matter of time before the stock takes off.