Short-term volatility can be a patient, long-term investor's best friend. 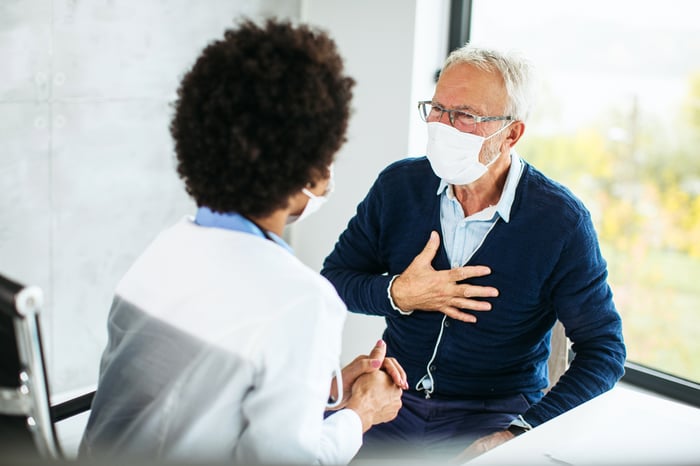 House Democrats are currently working on a bill to allow Medicare to negotiate drug prices with pharmaceutical companies, which would cost the pharma industry an estimated $500 billion over a decade.

While an average of $50 billion in annual revenue reductions sounds significant in absolute dollars, investors shouldn't be too concerned by this development because the U.S. pharmaceutical industry as a whole generated $539 billion in revenue last year.

So even if this bill does find its way through both chambers of Congress and makes its way to the White House to be signed into law, the U.S. pharma industry would only be set to lose about 9% of its revenue. Since 37% of Bristol Myers Squibb's nearly $23 billion in first-half revenue was derived outside of the U.S., the hit of this bill would be reduced even further.

And with three moderate Democrats and the Republican Party voting against the bill in its current form, the path to enactment appears to be limited.

So, with legislative risk appearing to be mild in nature, investors may also have the following question: Is Bristol Myers Squibb's business doing well fundamentally?

Bristol Myers Squibb's first-half revenue advanced 8.9% year over year to $22.8 billion, which was driven by solid growth from its top three drugs -- Revlimid, Eliquis, and Opdivo.

And even though Bristol Myers Squibb's patents for its three top-selling drugs will be expiring by the end of this decade, there are multiple promising drugs with the potential to stabilize and grow revenue.

Zeposia is the multiple sclerosis drug that was approved by the U.S. Food and Drug Administration (FDA) as COVID-19 was declared a pandemic in March 2020, which delayed growth plans for the drug. Through the first half of this year, Zeposia generated $46 million in revenue compared to just $1 million in the year-ago period.

But with Zeposia also receiving an approval for ulcerative colitis in May and doctor visits returning to pre-COVID levels, the drug has plenty of blockbuster potential. That's why analysts have peak sales estimates at anywhere from $1.6 billion to $5 billion annually for Zeposia.

Similar to Zeposia, Reblozyl's launch faced headwinds due to COVID-19. But with these challenges subsiding, Rebloyzl's first-half revenue nearly quadrupled to $240 million this year. And analysts believe Reblozyl's peak sales potential is around $2 billion annually, which implies plenty of future growth.

Aside from Bristol Myers Squibb's upcoming drugs that have already been approved, the company has a great pipeline with more than 50 compounds currently in development.

One drug that Bristol Myers Squibb acquired via the $13.1 billion acquisition of Myokardia last year was mavacamten, which could be approved as soon as early next year to treat a rare and serious heart condition known as obstructive hypertrophic cardiomyopathy (HCM).

Due to mavacamten's efficacy in treating HCM, analysts are forecasting that the drug will reach $2 billion in sales by 2026.

As a testament to Bristol Myers Squibb's robust existing portfolio and pipeline, analysts are expecting the company will generate 6.9% annual earnings growth over the next five years.

It also appears that Bristol Myers Squibb is a good value, especially after the recent dip.

To this point, Bristol Myers Squibb at $60 a share is trading at just eight times this year's average analyst EPS forecast of $7.48.

And Bristol Myers Squibb's 3.2% dividend yield is moderately higher than its 13-year median 2.9% yield, implying that the stock is undervalued.

While investors wait for Bristol Myers Squibb to be rewarded with a higher valuation multiple, they can sleep well at night knowing that the stock's dividend is safe with its payout ratio expected to be in the mid-20% range for this year.