There's a reason why there are so few of them in his portfolio.

If you're stumped about how to find lucrative healthcare stocks, Warren Buffett might be able to help. As the value investing rockstar of the late 20th century, Buffett's patient and conservative approach should be a tool in every investor's collection.

Today, I'll be explaining the most relevant bits of Buffett's philosophy as they apply to a pair of healthcare stocks that you may have heard of. You might not see these two stocks in his portfolio anytime soon, but you'll get an idea about what Buffett's rationale for them might be either way. 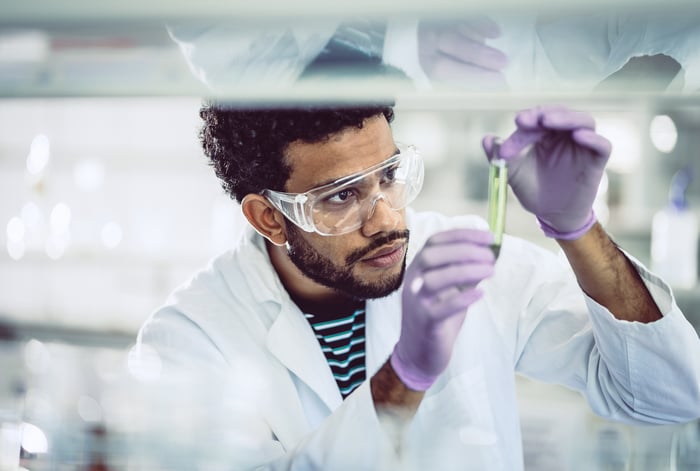 Moats and evergreen products can go a long way

In the healthcare sector, there are many types of moats. For a company like Intuitive Surgical, (ISRG -0.82%) which makes robotic surgical units for general surgery use, one of its moats is in the form of customer lock-ins. Once a hospital purchases one of Intuitive's da Vinci surgical robots, surgeons need to spend a considerable amount of time being trained in its use.

Therefore, it's much less friction for the hospital to keep using the robots once surgeons are trained rather than switching to a competitor, which would require getting up to speed all over again. And, since hospitals purchase multi-year maintenance contracts for their robots, there aren't that many opportunities to switch without wasting money, which keeps them around for longer.

Intuitive has more than one type of moat, which Buffett would definitely approve of. The da Vinci brand of surgical robots has widespread and positive recognition, and the company's intellectual property (IP) protections ensure that competitors will have a harder time developing similar systems.

One thing that Buffett looks for that Intuitive doesn't have is a simple product with a highly repeatable business model. For all its merits, Intuitive is a technology-heavy company, and that means it spends more on research and development (R&D) with each passing year, which Buffett would not be a fan of. The more a company needs to spend on R&D to maintain its edge, the more pressure there will be on its profit margin when strong competitors are on the scene.

In contrast, Retractable Technologies (RVP -3.32%) looks like it'd be much more up his alley when it comes to the ideal Buffett product in healthcare. The company makes retractable safety needles for safely administering medicines and vaccines without the risk of needle-stick injuries for healthcare providers. This is an evergreen product as it will be perpetually in demand.

Retractable's R&D costs have actually trended downward over the last decade up until last year when its revenue exploded due to the need to vaccinate people during the pandemic.

The Oracle of Omaha is a stickler for consistent earnings and a healthy balance sheet. For example, Retractable's $2.3 million in debt is puny when compared to its $151.7 million in trailing revenue, which would be another factor in its favor for Buffett. Likewise, Intuitive's complete lack of debt is something he'd find strongly appealing.

Intuitive's earnings growth is far more consistent than Retractable's. One might assume that the steady level of demand for needles before the pandemic would lead to predictable gains compared to the rate of growth with less broadly distributed robotic surgical units, but that isn't the case.

Intuitive's quarterly earnings before interest, taxes, depreciation, and amortization (EBITDA) grew more or less without fail for each of the last five years. Whereas Retractable shifted between expansion and contraction before 2020. 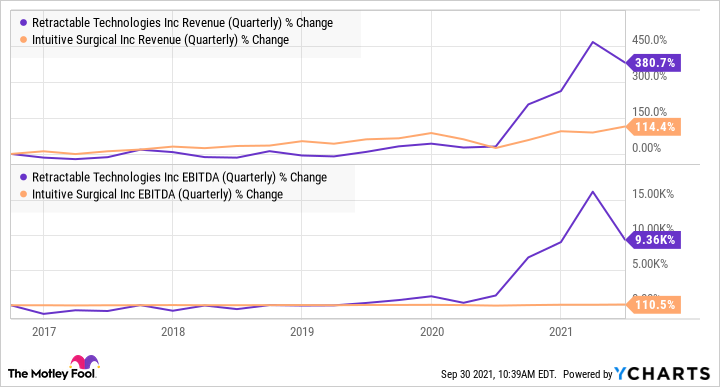 Finally, Buffett prefers companies that keep their expenses low as a percentage of their revenue. If costs get smaller in comparison to revenue over time, that's the icing on the cake.

And both of these stocks could fit the bill. Retractable's total expenses represent just over 70% of its quarterly revenue, and that proportion has fallen by more than 30% over the last three years. For Intuitive, the reduction has been a modest 1.4% in the same period, with total expenses reaching 65% of quarterly revenue. Still, Buffett would probably recognize that Intuitive's profit margin is more stable over time.

Would Buffett want to buy either stock?

Given that healthcare stocks only account for around 4% of Buffett's portfolio, it's important to recognize that they generally aren't his favorites. Of the healthcare stocks he owns, he seems to prefer drug developers like AbbVie and Biogen over hardware companies like Intuitive and Retractable.

Nonetheless, I think that both Retractable Technologies and Intuitive Surgical are candidates for being Buffett picks in healthcare. Between the two, Intuitive would doubtlessly be his preference, as it has a stronger track record of sustained growth.