Marqeta has formed partnerships with companies like Google, Square, and Goldman Sachs, but it's still flying under many people's radar.

It's been a hot IPO market for many fintechs like Coinbase, Affirm, and Robinhood -- all of which have gone public this year. However, one fintech that is flying under everyone's radar is Marqeta (MQ 1.35%), a company that specializes in creating customized spending cards for many of the largest companies today.

What do companies like Affirm, DoorDash, and Square, as well as more established players like Alphabet, Goldman Sachs, and JPMorgan Chase, all have in common? They can't resist Marqeta's special ability to issue payment cards. Marqeta has done a splendid job of bringing in new clients on long-term contracts while also incentivizing those clients to use its cards in return for volume-based discounts. This aggressive growth strategy is working, and in the first six months of this year, Marqeta's total processing volume is up 110%. So why doesn't the stock get more love?

Marqeta is kind of like the plumbing for the card issuing industry. The fintech creates customizable spending cards for companies of all sizes -- while significantly cutting down the time it takes to bring these cards to market. In one instance, Square turned to Marqeta when it wanted to create a virtual debit card to pair with its fast-growing money-transfer app. While a traditional card issuer would've spent months building such a product, Marqeta turned around the product in just six weeks. 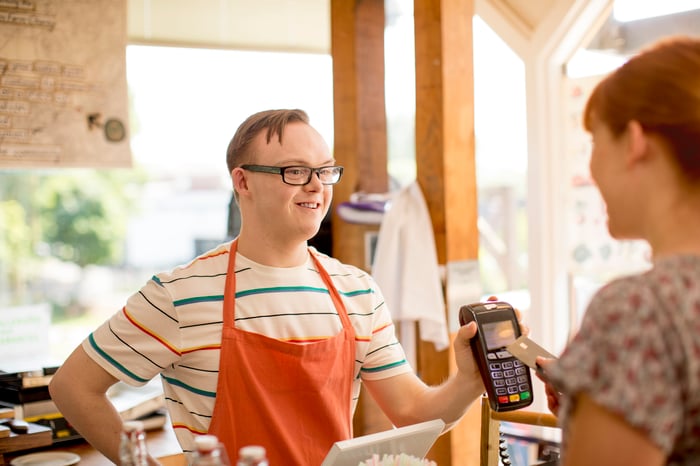 Marqeta is also sought out by larger financial institutions that look to stay competitive with those newer fintech entrants, and it sees itself as the "de facto modern card issuing platform." Interestingly, its cards can cut down on fraudulent activity. For example, one feature it has in its cards is dynamic spend controls. This gives companies the ability to put rules in place on its cards that can reduce fraudulent charges, like allowing payments at specific vendors, locations, or for a specific amount.

Marqeta competes with legacy technology platforms like Global Payments, Fiserv, and Fidelity National Information Services, and believes its edge is its speed to market and the flexibility of its payments solutions. It also competes with emerging companies like Stripe and Adyen. Marqeta argues that its advantage over these companies is its years of card issuing experience as well as its laser-focus on card issuing and processing services while those other companies focus time and energy on other types of services.

Marqeta makes its money on a per-transaction basis, a model similar to that of Visa and Mastercard. It also utilizes a usage-based model, giving clients volume-based discounts to encourage them to use the cards early and often while signing clients to long-term contracts to maintain this alignment. For example, in July the card issuer extended its agreement with buy now, pay later company Affirm through January 2024. It also has agreements with Visa and Mastercard that extend through 2022 and 2028, respectively. These long-term contracts and usage-based fees should help provide stability to revenue and drive larger transaction volume in the coming years.

During its second-quarter earnings call, CEO Jason Gardner said that the global money movement market is $74 trillion, of which $30 trillion is related to card issuing. He noted that Marqeta processed $60 billion in volume in 2020, a fraction of its total addressable market.

Growth this year has been solid. In the second quarter, Marqeta's first reporting period as a publicly traded company, net revenue increased 95% to $230 million and gross profit was up 110% to $97 million. The company reported total processed volume -- the total dollar amount of payments processed through its platform, net of returns and chargeback -- of $26.5 billion, up 76% from last year. And for the first six months, its total processed volume is $50.5 billion, up 110% from last year.

However, the company saw a net loss of $81 million -- larger than its $22 million loss last year. This net loss was due in large part to stock-based compensation, which was $56 million in the quarter.  CFO Tripp Faix said "we are just scratching the surface of a large addressable market" and "the best way to capitalize on that opportunity is to invest in our product, our technology, and our people."

Expect more quarterly losses as it expands its reach

In the third quarter, Marqeta expects to see revenue of $114 million to $119 million.  Meanwhile, analysts' most recent estimates have the company bringing in $120 million on average, with an average loss per share of $0.13.

As digital payments continue to grow in popularity, more companies look to partner with Marqeta to provide their customers with card payment solutions. Marqeta will likely remain unprofitable in the coming quarters as it invests in its technology and employees. However, seeing how many major companies have partnered with it along with the rapid growth of its total processed volume, Marqeta is well positioned for explosive growth, and is deserving of more attention than it currently gets.