As it turns out, you don't need to care.

If you're divorced, you may have heard that your ex-spouse can take your Social Security. That's somewhat true in that Social Security rules may allow your former spouse to claim benefits on your record. That may seem like it adds insult to injury, especially given the financial havoc a divorce can create.

But even if your ex can use your earnings to take Social Security, you shouldn't stress over it because they really aren't taking anything from you. Read on to learn about the rules for Social Security and divorce. 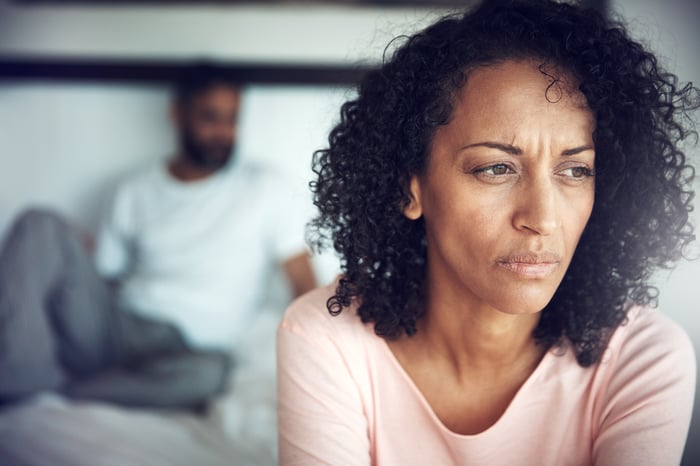 A Fidelity survey of more than 1,000 adults found that 52% of respondents believed an ex-spouse could affect their Social Security benefits. However, this belief is completely false.

Your benefits aren't affected in any way. If you've remarried, your current spouse's benefits won't be affected, either.

How Social Security works for ex-spouses

If your ex-spouse wants to claim your Social Security, they'll have to wait until you're both at least 62, which is the minimum age for collecting benefits. It doesn't matter if you've started benefits -- only that you're eligible. It also doesn't matter whether you're currently married, but they need to be unmarried to use your record.

When your ex applies for benefits, Social Security will look at how much they qualify for on your record versus theirs. The most they can qualify for is 50% of your full retirement age benefit, and that's only if they wait until they've reached full retirement age. If they claim early, they'll get even less. If they started as soon as they turned 62, they'd receive just 32.5% of your primary insurance amount.

If your ex-spouse was employed for most of their adult life, there's a good chance they'll get more Social Security by taking benefits on their own record, rather than yours. Technically if your earnings history yields a bigger benefit for your ex, Social Security will use their record to qualify them for a benefit, then use your record to make up the difference and give them the higher amount.

Can you stop your ex from using your Social Security record?

No. You don't have any say on whether your ex uses your earnings history to get benefits. Social Security doesn't need your consent, nor will you be notified if they're using your record for benefits.

Social Security's rules for divorced spouses exist because both people often contribute economically in a marriage, even if one spouse outearns the others. For example, ex-spouse benefits prevent homemakers and stay-at-home parents from being left with no retirement benefits should the marriage end.