Moviegoers turned out in strong numbers for "Venom" and James Bond's "No Time to Die."

Shares of AMC Entertainment Holdings (AMC -10.37%) were up 1.5% as of 9:42 a.m. EDT on Monday, after the largest theater chain in the U.S. reported a new pandemic-era record of 3.9 million moviegoers visiting its theaters over the weekend. The huge boost in attendance over the weekend came from the domestic release of Venom: Let There Be Carnage, and the release of the new James Bond film, No Time to Die, in overseas markets.

However, by 11:20 a.m. today, the stock had given up its earlier gains and was down 4.1%, as the broader market continued the previous month's sell-off. 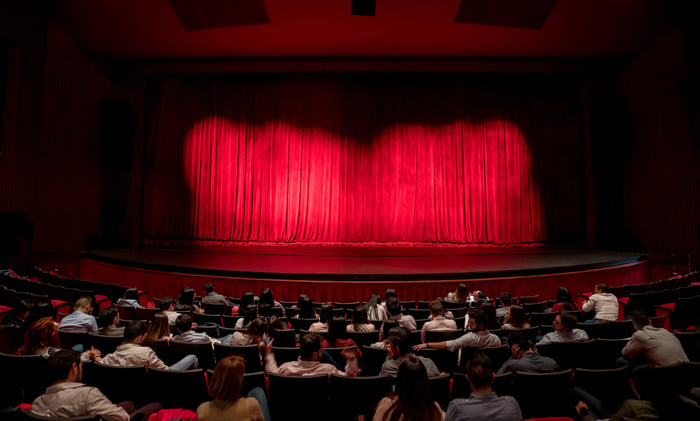 While AMC still has a long way to go to fully recover from the pandemic, capacity utilization across its theaters has been on an upward trajectory this year. Utilization figures were 41% of 2019 levels in the first quarter, 61% in the second quarter, and 68% through the first month of the third quarter.

The release of the new Venom and James Bond films set a new post-reopening record for global attendance, which should keep AMC's recovery on track. In the second quarter, revenue came in at $444 million, compared to just $19 million in the year-ago quarter.

CEO Adam Aron said, "The success of these two new blockbuster movies, and of our theatres both at home and abroad, demonstrates the huge pent-up demand we see in moviegoers who are ever so eager to return to movie theatres."

Unless the pandemic takes an unexpected turn, AMC should finish 2021 on a high note. No Time to Die will release domestically this upcoming weekend, and it has already grossed $119 million internationally. On top of James Bond, AMC is looking forward to an action-packed slate of films releasing through December, including Eternals, Ghostbusters: Afterlife, Dune, West Side Story, The King's Man, and Spider-Man: No Way Home.

Investors should be aware that this top movie theater stock already trades at a high price-to-sales ratio of 12, and that explains why the stock is trading down after the positive news today. Since investors already expect improving business results in the near term, a strong finish to 2021 might not necessarily translate into a higher stock price.