After a hot start to 2021, the drugmaker's share price has cooled off over the last month.

If investors are looking for an example of just how volatile even large-cap stocks can be, they can look to Eli Lilly's (LLY -1.46%) recent price activity.

After rallying by 67% to start the year and reaching an all-time high of $275 a share in mid-August, the pharmaceutical powerhouse has now surrendered half of those gains. It's still up 35% year to date, but after such a pronounced decline, is now a smart time to buy the stock? 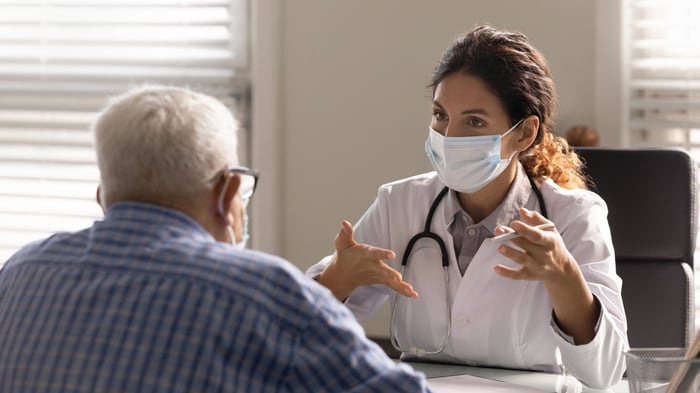 At its mid-August peak, Eli Lilly was trading at 34 to 35 times its non-GAAP earnings per share guidance of $7.80 to $8 for this year. Based on analysts' expectations for 15% annualized earnings growth over the next five years, that gave it a price-to-earnings-growth ratio well above 2. I would argue that this is the level at which even fundamentally strong large caps like Eli Lilly start to become overvalued.

Then, a bill was introduced in the U.S. House of Representatives that would enable Medicare to bargain with drugmakers for lower drug prices. The proposed legislation, if passed, would result in an estimated $500 billion reduction in U.S. pharmaceutical industry revenues over a decade. This would likely only amount to mild top-line trim, given that the industry is on track to take in more than $5 trillion in revenue during that time (assuming matters continue in line with 2020's $539 billion in U.S. pharmaceutical revenue). However, the possibility was enough to send Eli Lilly's shares into a tailspin.

But with the significant lobbying power that Big Pharma wields in Washington, D.C., the odds of such legislation making it through Congress are low. And even if Medicare is eventually allowed to negotiate lower drug prices, Eli Lilly generated 43.5% of its $13.55 billion in first-half revenue outside of the U.S. As such, pricing headwinds in the domestic market would have less of an impact on its financial results.

A great portfolio and an even better pipeline

Thanks to its portfolio of approved drugs, Eli Lilly generated robust revenue growth of 19.2% year over year to $13.55 billion in the first half of 2021.

Revenues from its top-selling drug, the type 2 diabetes treatment Trulicity, grew by 21.5% to $2.99 billion in the half. And though Trulicity is set to lose patent protection in 2027, the company is in a position to keep logging solid growth in its diabetes segment, which accounted for 46.4% of its total first-half revenue.

That's because its next-generation diabetes drug, tirzepatide, has been demonstrated in clinical trials to be even more effective in blood sugar control and weight loss than Trulicity. The company plans to submit tirzepatide to regulatory authorities around the world for approval by the end of this year, so it will likely enter the market soon. Based on tirzepatide's apparent superiority, analysts expect Eli Lilly will expand its market share in the diabetes treatment segment. Analysts forecast peak annual sales of $10 billion for the drug, which would more than offset Trulicity's eventual sales declines.

The Food and Drug Administration's (FDA) recent approval of a label expansion for diabetes drug Jardiance to treat systolic heart failure should also help sustain Eli Lilly's growth. Jardiance sales rose by 26.3% to $669 million in the first half, even before it was approved for the additional indication.

Its key breast cancer drug Verzenio also posted impressive growth in the first half: Sales soared 53.8% to $610 million. Bernstein analyst Ronny Gal argues that Verzenio is differentiating itself from Pfizer's (PFE -0.35%) Ibrance, which is why Gal is forecasting Verzenio's annual sales will increase to $4.6 billion in 2024. Verzenio will remain under patent until 2029.

Within Eli Lilly's immunology segment, first-half sales of plaque psoriasis and psoriatic arthritis drug Taltz advanced 15.9% year over year to $972 million. Since Taltz was first approved by the FDA in 2016, the company doesn't face the prospect of its patent expiration arriving anytime soon.

Given its strong slate of approved drugs and pipeline candidates, analysts' expectations of 15% annual earnings growth for Eli Lilly over the next five years are reasonable.

Growth and quality at a fair price

At its current price of $225 a share, Eli Lilly is trading at 28 times this year's earnings guidance. Considering its anticipated earnings growth, that's a reasonable price for long-term investors to pay.

The overwhelming drug portfolio and pipeline show promising revenues to come, which should easily quelch the concerns that the stock may be overvalued. With a payout ratio that is on track to be in the low-40% range this year, Eli Lilly also provides investors with a safe dividend yielding 1.5% at current share prices while they await an acceleration in earnings growth. Buying the stock on the decline could prove worthwhile and yield great results for your long-term portfolio.

2 Stocks That Could Outperform the Next Bull Market
376%