Was Peloton's success during COVID temporary, or is this fitness stock just warming up?

As one of the companies that benefited greatly from the pandemic, fitness company Peloton Interactive (PTON -2.86%) has earned the "COVID stock" label from investors. After the company's most recent quarter showed a slow down in its business, investors have been selling off the stock, pushing it to near 52-week lows.

Despite the turn in sentiment against the stock, there are three significant reasons to expect Peloton to continue growing for years into the future.

Peloton's fiscal 2021 fourth-quarter earnings revealed that its member base did fewer total workouts than the previous quarter, and workouts per subscription member were also down; this indicates that engagement from Peloton's customers decreased. However, context is essential; the quarter represented the summer months when people are more likely to go outside, as well as the pandemic pushing people away from gyms. 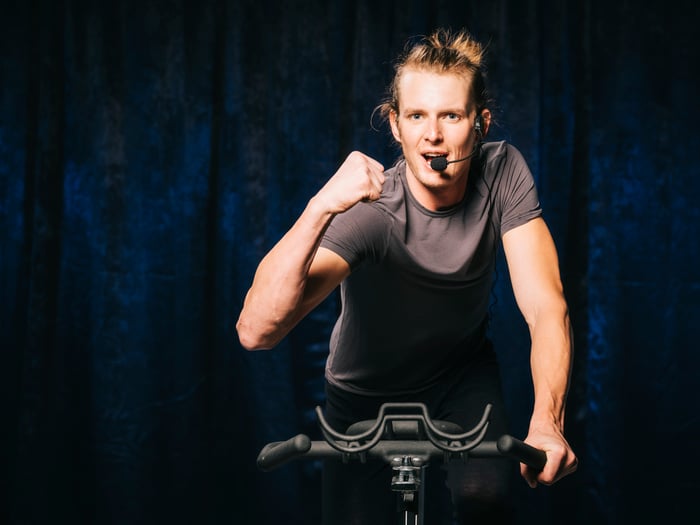 What's most important is that the company's total number of connected fitness subscribers continues to grow. Remember that the company has built its current member base on the back of the Peloton bike. The subscriber base was 2.33 million members as of 2021 Q4, up from 2.08 million the prior quarter and up more than 100% year-over-year.

There is a lot to get excited about in the company's hardware possibilities. The Tread has spent much of the time since it was initially launched sidelined with recalls. The Tread was relaunched at the end of August, and management has indicated an intention to penetrate new fitness areas such as strength training and rowing. There are bound to be new hardware launches over the next several years, which could help bring new members into the subscription base, as different equipment types appeal to additional consumers.

2. Bringing the craze to new markets

Peloton's business is heavily focused in the United States, but it's striving to become a global brand. The company has expanded operations to the United Kingdom, Germany, Australia, and parts of Canada. Australia is Peloton's newest market, launching there over the summer.

Its equipment costs thousands of dollars, so the company is targeting markets with prosperous economies. I wouldn't be surprised to see Peloton continue expanding throughout Europe, where many countries in the region have high GDP per capita, meaning there is a lot of disposable income. Additionally, Peloton could one day penetrate wealthy and digitally-friendly markets such as Japan and Southeast Asia.

Companies with powerful brands in large addressable markets can continue to grow for decades, and Peloton could fit that bill. Fitness is a nearly endless addressable market because just about everyone exercises in one form or another. Peloton boasts an exceptional net promoter score of 94 out of 100, meaning its customers are highly likely to recommend the brand to a peer, and its 92% retention rate means that the vast majority of Peloton's customers stick around once joining.

For a company that has become known for creating communities and fan groups around the brand, it's a "no-brainer" that Peloton would come up with a formal line of merchandise. The company recently revealed its apparel line, including workout clothing, shirts, yoga pants, backpacks, and accessories. Aside from the obvious revenue of apparel sales, it's free advertising that its customers pay to use.

Apparel isn't as flashy as the equipment it sells or as high margin as Pelton's subscription business, but investors shouldn't underestimate what a quality apparel brand could become. Apparel has created large and profitable companies such as Nike, with a market cap of $232 billion, and Lululemon at $50 billion. Peloton's entire business carries a market cap of just $26 billion.

Peloton is a cheap stock with a lot of potential

COVID helped accelerate Peloton's growth, but that doesn't mean that its growth story is ending. The company generated $4 billion in revenue during its fiscal 2021 year, putting the stock at a price-to-sales (P/S) ratio of 6.5, nearly its lowest P/S ratio since the beginning of the pandemic in 2020. Analysts are estimating the business to grow revenue at roughly 30% per year over the next two years, and I think the growth runway is there for it to continue growing at a similar rate beyond that.

Like Apple and the iPhone, the hardware is an entry point for customers to enter the ecosystem, where they will subscribe to services, creating "sticky" high-margin revenue. Peloton is operating a similar model, so investors will want to see the company continue to grow its connected fitness subscriber base. If the company succeeds, the current valuation could mean strong investment returns over the coming years for long-term investors.