Pennsylvania plans to become the 19th state to legalize marijuana.

It's not immediately apparent what all the fuss is about. None of the three stocks have reported earnings. No analysts have upgraded any of the stocks or raised price targets either. Here's the likely reason. 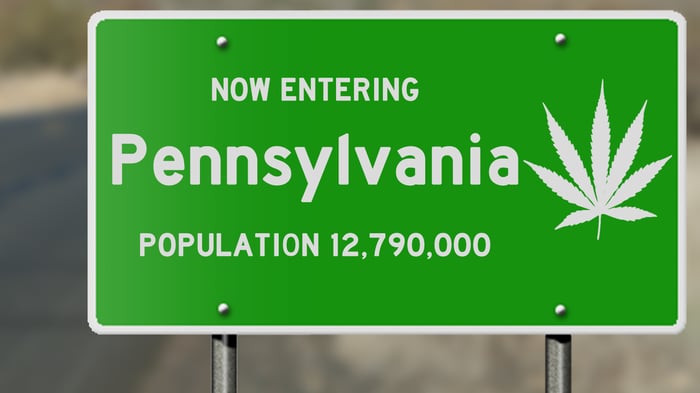 Federal legalization of cannabis seems stalled in Congress, as senators feud over whether they should pass a law permitting banks to provide financial services to cannabis companies (the SAFE Act) first, and then legalize the drug for recreational use -- or just legalize it all in one go. At the state level, on the other hand, marijuana legalization continues to march straight ahead.

As Pennsylvanian paper PennLive.com reports today, a former U.S. marshal-turned-state-senator and marijuana advocate has just submitted a bill to legalize marijuana for recreational use in the state. "I think it's inevitable," said Republican State Sen. Mike Regan, and "common sense," too.

"Two of our neighboring states, New Jersey and New York," reasons Regan, have already legalized marijuana for adult use. Indeed, NewYorkUpstate.com reports today that the state is "finally" setting up a Cannabis Control Board to regulate the marijuana that it legalized six months ago. And this means that the clock is ticking for Pennsylvania.

Sharing a border with both states, Pennsylvania now faces the prospect of suffering "border bleed with Pennsylvanians [buying marijuana in New Jersey and New York,] contributing to the tax base of those states and helping to pay for their roads and bridges," instead of Pennsylvania's.

It's much better, thinks Regan, for Pennsylvania to bow to the "inevitable" and legalize marijuana itself and keep hold of the $1 billion in annual tax revenues he expects will result.

Call me a realist if you like, but whatever happens in Washington, D.C. (and however long it takes to happen), I expect more and more states to follow Pennsylvania's way of thinking. If an adjacent state legalizes weed, the fear of losing tax revenue to a neighbor will encourage the bordering state to legalize, as well. The process will thus work like a game of dominoes, as each successive state that legalizes cannabis nudges its neighbors to do likewise.

Expect Pennsylvania to be the 19th domino to fall, and the rest of the country afterwards -- which will only be good news for marijuana stocks.

Rich Smith has no position in any of the stocks mentioned. The Motley Fool owns shares of and recommends Green Thumb Industries and OrganiGram Holdings. The Motley Fool has a disclosure policy.