Mental healthcare company Compass Pathways (CMPS 2.13%) continues to work on developing a new model of psilocybin therapy. It's a gradual path, however, and the stock hasn't moved much overall since the company last provided a financial update on Aug. 11. But in the month of September, Compass shares slid 11.9%, according to data provided by S&P Global Market Intelligence.

The company is pursuing a psychoactive treatment for depression using psilocybin, the active ingredient in psychedelic (or "magic") mushrooms. Though there was no real negative news to explain the stock-price drop in the month, it effectively just gave back the gains seen since that second-quarter update. But Compass has taken more steps forward on its research and development since that time. 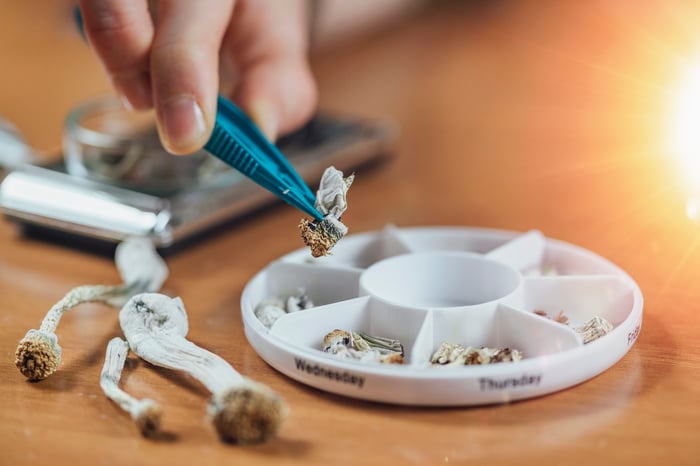 The company has announced that it has acquired an intellectual property (IP) portfolio that it developed with a partner researching new product candidates. The portfolio includes patent applications for a variety of psychedelic and another class of psychoactive substances that includes MDMA, commonly known as ecstasy. And the company's psilocybin therapy, known as COMP360, remains in its phase IIb trial for treatment resistant depression (TRD) underway across 22 sites in 10 countries.

The therapy is being developed for people who have not had success with other depression treatments. The Food and Drug Administration designated COMP360 with breakthrough therapy status in 2018, and the company has successfully completed its phase I trial. Compass says there is currently an unmet need for 100 million patients who, after two prior unsuccessful lines of therapy, are diagnosed with TRD.

Compass says that "early indicators from academic-sponsored trials show rapid reductions in symptoms in TRD and other mental health conditions," using its therapy. The phase IIb clinical trial data are expected to be released before the end of the year.

For investors, it's important to note that the company is not just going down the path for regulatory approval. As evidenced by the recent acquisition of the IP portfolio, Compass is pursuing a commercially exclusive patent strategy as well. It has already been granted two new U.S. patents in 2021, and has registered for several European and Asian patents. It also has multiple related applications pending.

The company is currently well funded, with cash and cash equivalents of $316.3 million as of June 30 Aggressive and risk-tolerant investors who believe in the potential success of its therapy should consider September's share-price drop an opportunity. If the risk is still too high for some, it is at least worth considering putting Compass Pathways on their radar as the clinical trials get closer to completion.